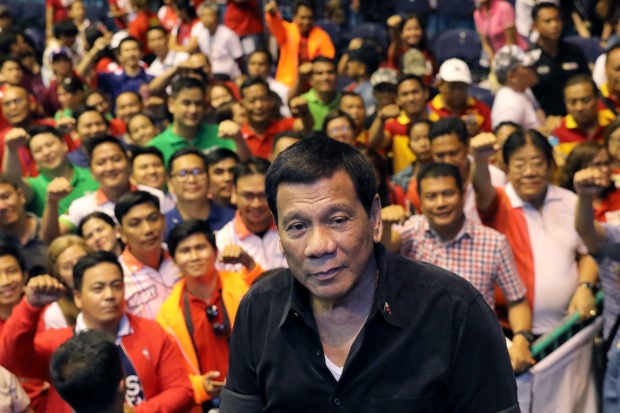 MANILA, Philippines — Amid the infighting and power struggle within the party, the ruling Partido Demokratiko Pilipino–Lakas ng Bayan (PDP-Laban) opened Saturday its national assembly where members are set to elect its new set of officers.

The national assembly is expected to be presided by President Rodrigo Duterte, PDP-Laban’s chairman, even as party leaders such as Senator Manny Pacquiao and Senator Koko Pimentel dubbed the event as “unauthorized.”

Pacquiao is PDP-Laban’s national president while Pimentel serves as the executive vice chairman.

During the assembly, party members are set to elect a new set of officers in view of what appears to be two factions forming within the party—one faction with Pacquiao and Pimentel, and the other with party vice chairman  Energy Secretary Alfonso Cusi. It is likely that Pacquiao will be replaced during the assembly.

Nonetheless, Pimentel said that Duterte’s attendance in the assembly does not make it legitimate even saying that the President attending the event only shows that he is following Cusi’s lead.

The national assembly came after PDP-Laban’s national council meeting on Friday where the agenda for the Saturday event was tackled—such as Cusi’s supposed expulsion from the party.

To recall, Pacquiao earlier expelled Cusi and two other officials for allegedly violating provisions of the party’s constitution “by showing allegiance to a political party apart from PDP-Laban.”

In a resolution dated July 3, Pacquiao said Cusi supposedly admitted that he is open to the candidacy of Davao City mayor Sara Duterte-Carpio as president, and President Duterte as vice president.

Duterte-Carpio is not a member of PDP-Laban and is currently the chairman of the regional party Hugpong ng Pagbabago (HNP).

At one point, Pimentel accused Cusi of being the “brains” behind an alleged attempt to grab power in the ruling PDP-Laban.