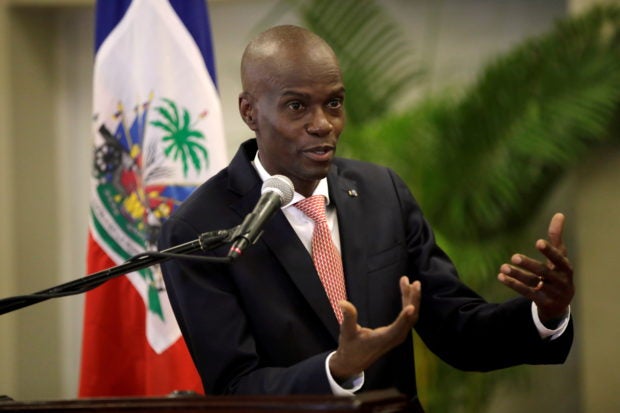 Moise was shot dead when assassins armed with assault rifles stormed his private residence in the hills above Port-au-Prince on July 7.

An investigation by Haitian and Colombian authorities, alongside Interpol, into Moise’s killing has revealed that Badio appeared to have given an order for the assassination three days before the attack, General Jorge Vargas said in an audio message sent to news outlets by the police.

It was not immediately possible to reach Badio for comment. His whereabouts is unclear.

According to Vargas, the investigation found that Badio had ordered former Colombian soldiers Duberney Capador and German Rivera — who had initially been contacted to carry out security services — to kill Moise.

“Several days before, apparently three, Joseph Felix Badio, who was a former official of (Haiti’s) ministry of justice, who worked in the anti-corruption unit with the general intelligence service, told Capador and Rivera that they had to assassinate the president of Haiti,” Vargas said.

Vargas did not provide proof or give more details about where the information came from.

Capador was killed and Rivera captured by Haiti police in the aftermath of Moise’s murder, authorities have said.

On Sunday, Haitian authorities detained 63-year-old Christian Emmanuel Sanon, widely described as a Florida-based doctor, and accused him of being one of the masterminds behind the killing.

Former Haitian Senator John Joel Joseph is being sought by police after Haiti’s National Police Chief Leon Charles identified him as a key player in the plot, while Dimitri Herard, the head of palace security for Moise, has also been arrested.

“This is a big plot, a lot of people are part of it,” Haiti’s Acting Prime Minister Claude Joseph said in a news conference. “I am determined to move the investigation forward.”

The group of assassins included 26 Colombians and two Haitian Americans, according to Haitian authorities. Eighteen of the Colombians have been captured, while five are on the run and three were killed.

Many of the Colombians accused of involvement in the assassination went to the country as bodyguards, Colombian President Ivan Duque said on Thursday. That has been confirmed by relatives and colleagues of some of the detained Colombians.

“We are assisting in all the support tasks for the interviews that are being carried out with the captured Colombians,” said Vargas.

Colombia will send a consular mission to Haiti as soon as it is approved by the Caribbean nation, Colombian Vice President and Foreign Minister Marta Lucia Ramirez told journalists on Friday, to meet with the detained Colombians, ensure their rights are being respected, and move ahead with the repatriation of the remains of the deceased Colombians.

The ministry is in daily contact with the families of the dead and detained, Ramirez added.

She repeated Colombian government assertions that very few of the men, who were ex-military, knew about the assassination plan but said those responsible should pay the price.

“Whoever they are, wherever they are from, (they should face) all the drastic consequences this crime should bring,” she said.