Who really heads PDP-Laban? Comelec may have last word 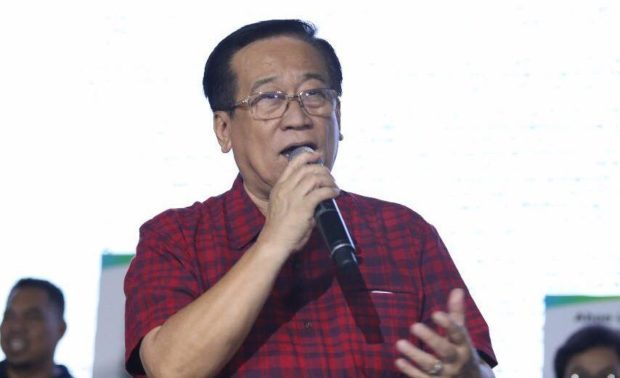 MANILA, Philippines — The Commission on Elections (Comelec) may have to decide who will lead the ruling Partido Demokratiko Pilipino-Lakas ng Bayan (PDP-Laban) if the feud currently wracking it continues.

According to election lawyer Romulo Macalintal, the Comelec can make the decision if PDP-Laban is unable to resolve its issues by Aug. 15, and if the feuding factions each led by the party president Sen. Manny Pacquiao and the vice chair Energy Secretary Alfonso Cusi submit separate sworn information and update statements (SIUS) listing the party’s current members and officers.

This is important because whoever leads PDP-Laban will have to sign all documents submitted to the Comelec, including the party’s official candidates for the May 2022 elections, Macalintal said on Wednesday.

With PDP-Laban’s feuding factions seemingly heading to a point of no return only 10 months before the national elections, its former president Sen. Aquilino Pimentel III said illegitimate and disloyal members should be weeded out.

“It’s now time to prune the party, to vet and to determine who are really in [it] because of basic principles and objectives,” Pimentel, son and namesake of the late PDP founder, told the Kapihan sa Manila Bay forum.

Citing a 1989 Supreme Court minute resolution in the case of Palmares v. Comelec, Macalintal said the poll body had “exclusive jurisdiction” over party leadership “where one party appears to be divided into wings under separate leaders each claiming to be president of the entire party.”

If the dispute is not handled internally, PDP-Laban and its officers and members can be plunged into “a big and serious political crisis,” he said.

Comelec spokesperson James Jimenez had yet to respond to requests for comment at press time.

Pacquiao and President Duterte, who chairs PDP-Laban, are now at odds over the senator’s criticism of the administration. The senator and his allies have issued a resolution expelling Cusi and two others for alleged violation of the party’s bylaws and constitution by showing “allegiance” to another party.

Rumored to be planning a presidential run in 2022, Pacquiao said the Cusi faction’s “manipulation” of the party to call for Davao City Mayor Sara Duterte’s own presidential candidacy was a violation of PDP-Laban bylaws because it was a tacit endorsement of a nonmember.

Malacañang, however, has said Cusi remained a “legitimate” PDP-Laban leader.

Macalintal said the Comelec had resolved a similar leadership dispute within PDP-Laban. He said that in 2019, the poll body received two SIUS and two lists of authorized signatories for the party filed by Pimentel and one Rogelio Garcia.

“Eventually, the Comelec decided in favor of the Pimentel group as the legitimate [leader] of PDP-Laban,” Macalintal said.

The Cusi faction has called for national meetings on July 16-17, supposedly to be attended by Mr. Duterte.

But Pimentel said the genuine party leadership would not recognize the meetings. He insisted that Cusi and the two others had been removed for pushing for the presidential candidacy of an outsider, Mayor Duterte, in a possible tandem with her father in 2022.

He said there was no reason for PDP-Laban to look elsewhere because it had a viable candidate in Pacquiao.

“Why look outside when we have a member who is a prospective presidential nominee? If the standard-bearer is a nonparty mate, can you hold this person accountable to the party’s programs?” he said.

Pimentel said the regular PDP-Laban assembly would take place in September “so that the party president will be there.” Pacquiao is in the United States training for an Aug. 21 fight.

“July 17 is a brainchild of Secretary Cusi. As to who will attend, we will now know who they are. We can check their credentials and see if they meet the party’s membership requirements,” Pimentel said, adding that many in Cusi’s group had not even filled out the basic membership forms.

But Pimentel refused to lay the blame for the party rift on Mr. Duterte.

“Well, the President is being fed information by Secretary Cusi. All of these moves, this reorganization… it’s his brainchild as the vice chair of the party,” Pimentel said.