MANILA, Philippines – Labor group Kilusang Mayo Uno (KMU)  has asked the National Bureau of Investigation (NBI) to identify the people behind several social media posts that tagged them and other cause-oriented organizations as part of the communist group.

In a letter to NBI officer-in-charge Director Eric Distor, KMU said they were alarmed by the proliferation of anti-communist propaganda tagging labor leaders and members of workers’ organizations as part of the communist movement.

“We call on the NBI to immediately look into these cases of attacks, smear campaign, and disinformation drive against us—workers, labor leaders, labor unions, and workers’ rights advocates and our organizations,” read the letter signed by KMU Chairman Elmer Labog and its Secretary-General Jerome Adonis.

The same letter also called on the NBI to look into “state-funded troll farms which generate content in these social media accounts and pages, and investigate the misuse of public funds which violates the General Appropriations Act.”

They said red-tagging officers and members of workers’ organizations “undermine our organization’s integrity and grossly violate our rights to organize workers, form unions, and the people’s freedom of association as guaranteed by the Philippine Constitution and provided in International Conventions.”

They said the “vilification,” “mounting hysteria,” and “hate-campaign” “endangers our life and liberty as free citizens.”

Attached in their letter were photocopies of the social media accounts that red-tagged their group and other cause-oriented organizations.

Just recently, the Presidential Communications Operations Office (PCOO) is under fire after it was flagged by the Commission on Audit (COA) for hiring 375 “social media specialists” last year. 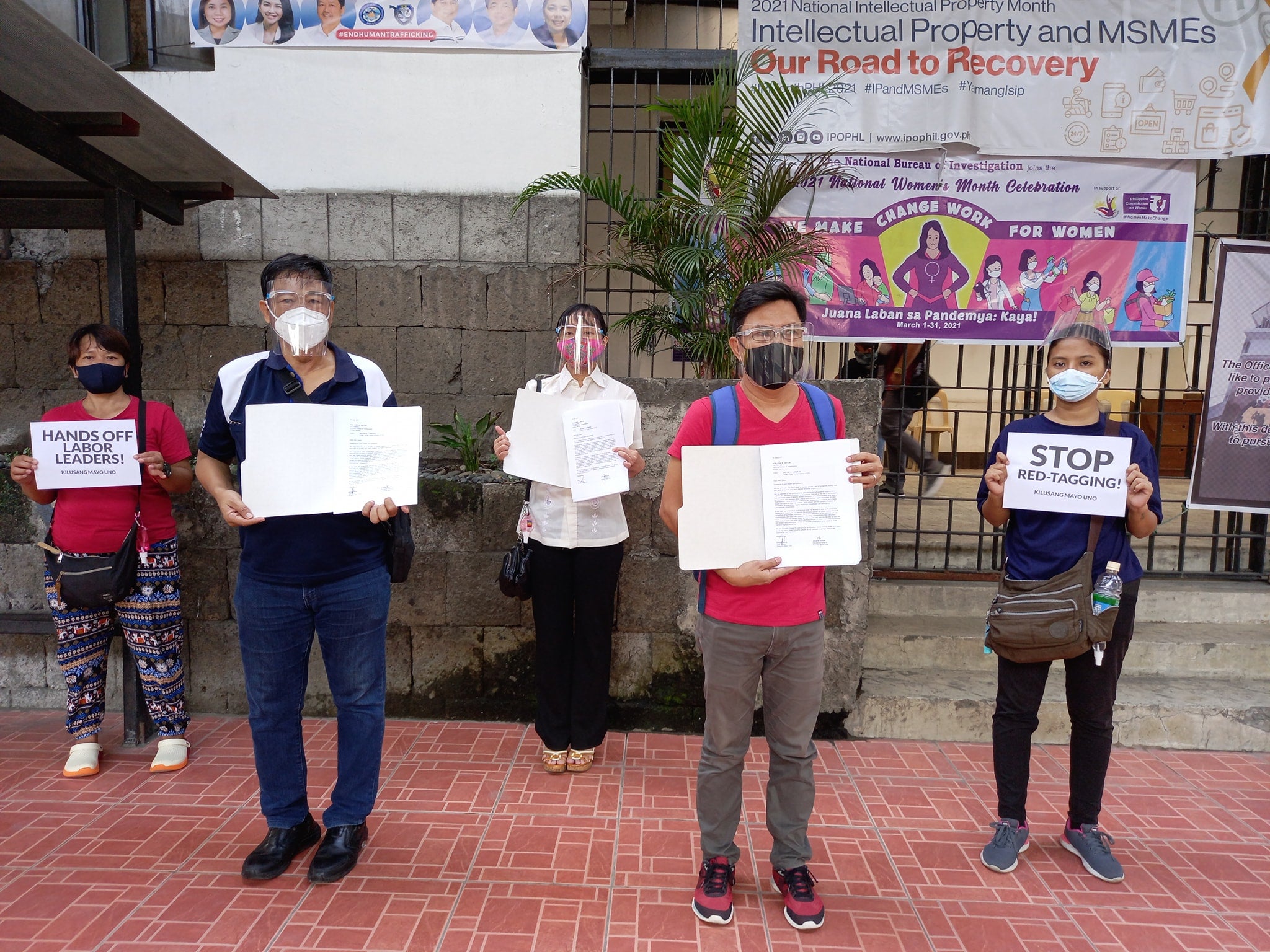 KMU asks the NBI Cybercrime Division to look into multiple social media posts tagging them and other cause-oriented organizations as part of the communist movement. KMU Chairperson Elmer Labog and Secretary-General Jerome Adonis led the filing of the complaint supported by Kabataan Rep. Sarah Elago. PHOTO FROM KMU.

Read Next
LPA outside PAR to pull ‘habagat,’ bringing rain and cloudy skies over Southern Luzon, Visayas — Pagasa
EDITORS' PICK
NCR’s COVID-9 alert level may be downgraded from 3 to 2 soon — DOH
Legarda emphasizes role of ICC/IPs in nation building this IP month
Climate Change Commission and Nestlé PH to discover sustainability-focused solutions
Work-From-Home is here to stay and requires reliable logistics
Biden vows to stand with Asia on freedom, hits at China on Taiwan
FDA reviewing COVID-19 vaccines’ EUA for booster shots
MOST READ
Drivers now required to take driver’s education upon license renewal – LTO
Gordon to Duterte: You? Teaching me courtesy?
Marcos Jr’s ‘special diploma’ from Oxford: You can have it, too
Can Marcos Jr. be disqualified?
Don't miss out on the latest news and information.