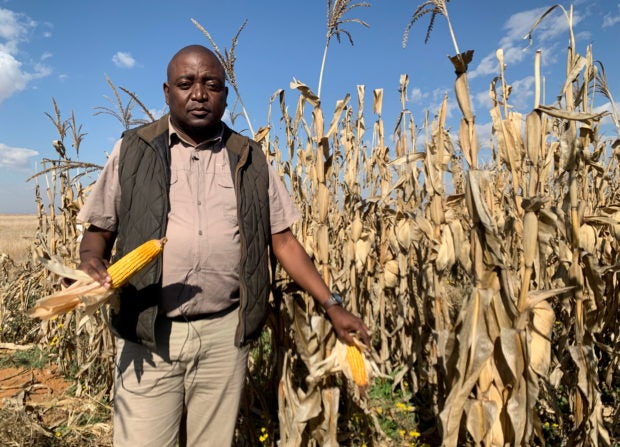 JOHANNESBURG — Happy Letsitsa hasn’t paid off the money he borrowed to survive a 2019 drought that ravaged his maize and sunflower farm in the South African province of Free State.

He has no drought insurance. If rains fail again, they could spell the end of his business, which supports his wife, child, father and extended family.

“It’s like going to a casino and playing a high bet,” he said of running his smallholder farm without cover. “It’s not easy, especially if you’ve got one stream of income: farming.”

This precarious livelihood is common among the hundreds of thousands of small farmers in South Africa. Most can’t access any drought cover in a country that feeds the wider region with staples like maize but is increasingly beset by extreme weather on the front lines of climate change.

It’s not just the small guys. The problem is acute among larger farmers too. Most can’t afford the main commercial cover for drought, known as multi-peril crop insurance (MPCI), or are not offered it by insurers.

Jan Pretorius in North West province is one of the lucky few that can pay for MPCI, but even he’s struggling. His premiums make up around 11% of the roughly 7,000 rand ($492) he spends to plant each of his roughly 600 hectares of maize.

“Where we’re farming, nobody is getting multi-peril crop insurance anymore,” he said.

Farmers and insurers alike say the insurance system is broken, at a time when droughts are becoming longer and harsher. Some parts of the country are in their ninth dry year, while a drought across much of the southern African region that began in 2018 left tens of millions of people hungry.

Now a plan has been formulated by insurers and the government for a 3.2 billion rand ($223 million), 10-year state subsidy scheme aimed at fixing the market’s problems, according to a South African Insurance Association (SAIA) document seen by Reuters that outlines the previously unreported proposals.

The scheme, which was confirmed by the government, would see commercial grain and oilseed farmers have 25% of their MPCI premiums subsidized. Smallholders in grain, oilseed or livestock would be offered a type of cover called weather index insurance, and have the state pay 75% of their premiums.

Weather index cover is used by millions of farmers in several nations, such as Kenya and India, but has never been tried in South Africa. It pays out automatically when a metric, such as rainfall, is above or below a certain level, removing the need for costly visits to sites to assess claims.

“I am hopeful,” he added. “If you look at the … changing weather patterns, I don’t see how agriculture can survive without a product like this.”

This was echoed by Richard Boys, a senior manager at Hannover Reinsurance South Africa.

“Without such initiatives, the inevitability of MPCI becoming increasingly unaffordable for farmers and unviable for insurance companies is a real concern,” he said.

South Africa’s agricultural industry employs over 800,000 people. Yet high costs, combined with low availability, mean only 20% of the country’s commercial grain farmers have drought insurance, according to the SAIA document.

There are more than 7,000 commercial grain farmers, according to industry association Grain SA. Estimates of smallholders vary, and the vast majority also don’t have drought cover.

Ramashia, who said his ministry was attempting to eke out the money from its budget for the subsidies scheme, said the priority was to help the smaller farmers.

An industry pilot project that started this month, led by the country’s largest non-life insurer Santam, aims to cover around 50 smallholders with a product linked to soil moisture, measured via satellite, according to Santam’s head of agriculture Gerhard Diedericks said.

A similar industry pilot led by the state-owned Land Bank is still awaiting approval from the Treasury, the company told Reuters.

Paswel Marenya, a senior economist with the Consultative Group on International Agricultural Research, said weather index insurance was key to increasing smallholders’ resilience, and that payouts would be quicker and cheaper for the government.

However it has problems, he said: farmers can be left worse off if losses exceed the payouts and in some countries take-up has lagged expectations, with even subsidized premiums too high for many poor farmers.

Subsidy schemes should also come in conjunction with other initiatives, like education or new technologies, he added.

The kind of MPCI subsidies being offered to commercial farmers under the plan have shielded farmers from rising premiums elsewhere such as China and the United States, Swapnil Soni, senior underwriter at reinsurer Scor, told Reuters.

Currently, high costs mean farmers in wetter regions opt to chance it rather than pay, leaving insurers unable to hedge risk in their books.

“It works against the whole concept of insurance,” said Soni, adding that reinsurers’ South African crop insurance books, including Scor’s, had made frequent annual losses. As a result, it had cut back the amount of business it writes in its crop insurance book by roughly 70% as of 2020, he said.

There’s little respite, with the weather only likely to get more extreme.

A 2019 report by the Intergovernmental Panel on Climate Change described the southern African region as a projected climate change hotspot.

It cited studies showing temperatures have been rising over its subtropical regions at twice the global rate on average over the last five decades and warning of longer and more frequent heatwaves or that the region is likely to become drier even if global temperature increases are limited to 2 degrees Celsius.

Farmer Pretorius in North West province said that, even with drought insurance, he had no control over the weather that could make or break his business. So every day he looks upwards and pleads for the skies to open.