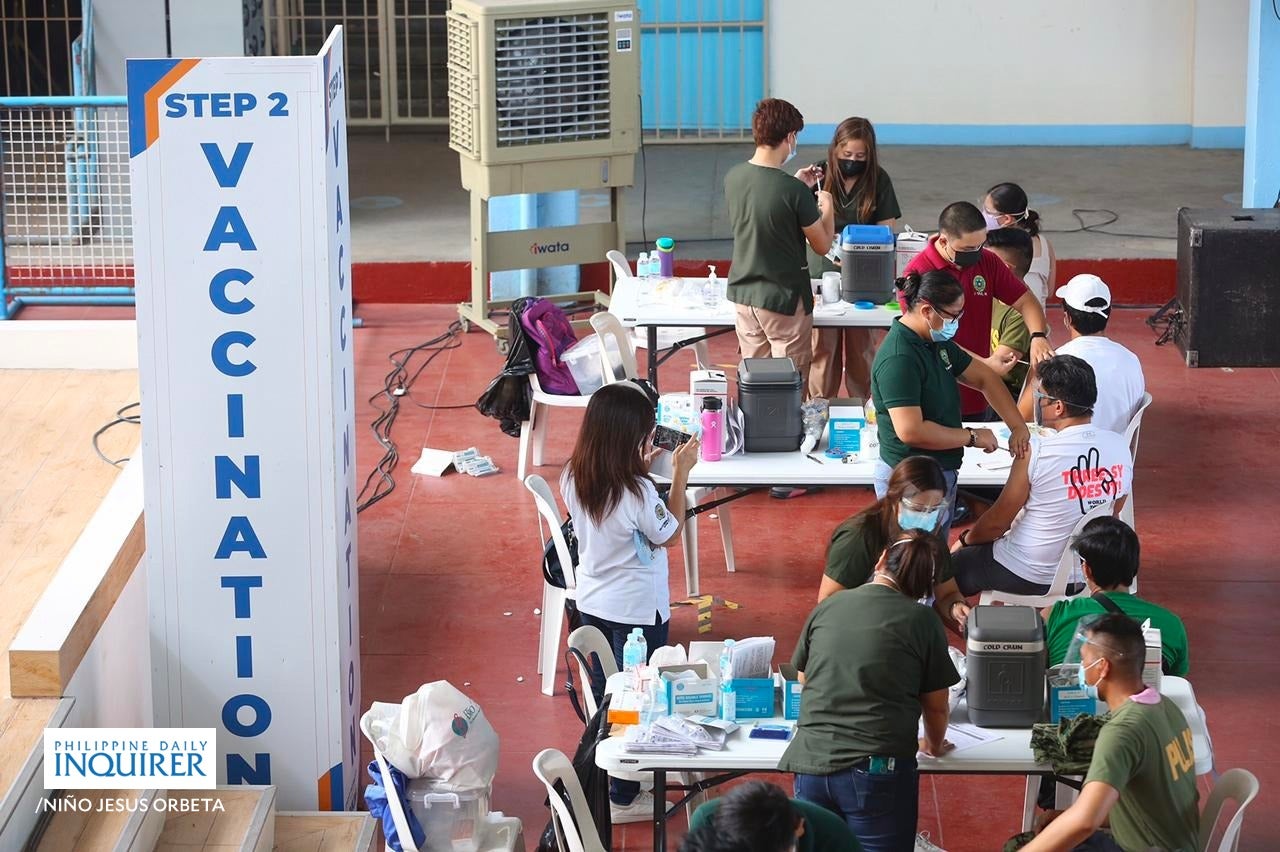 MANILA, Philippines—Lack of supply is hounding vaccination rates everywhere but in the Philippines, several local government units (LGUs) had to suspend their injection programs because they ran out of doses.

In an advisory by the National Task Force Against (NTF) COVID-19 on July 4, the Regional and Local Vaccination Operation Centers, implementing units and injection sites had been informed of delays in the arrival of supplies. 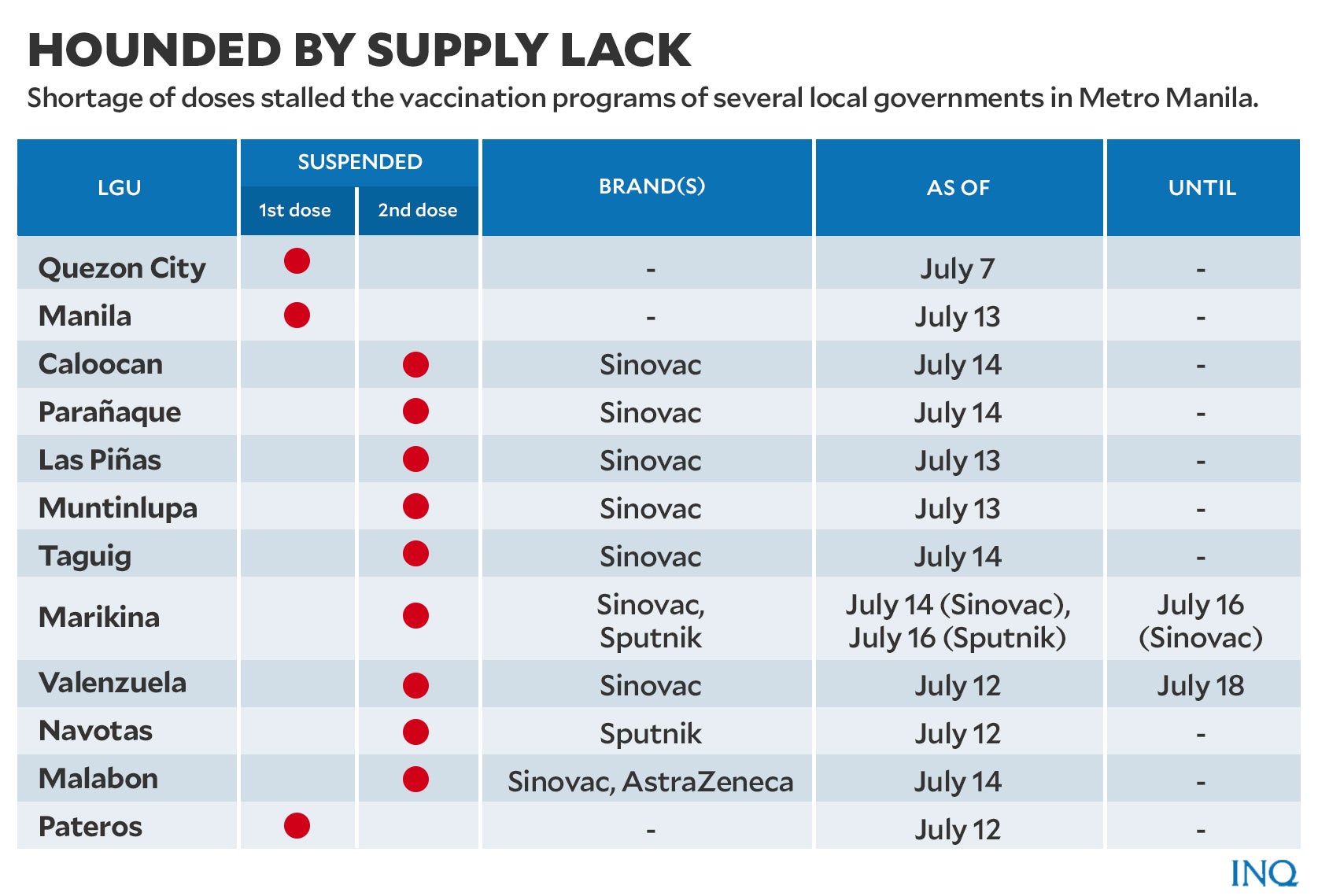 Among those delayed were doses of Sputnik V, the Russian vaccine, and Coronavac, the vaccine made by Chinese company Sinovac.

On Wednesday (July 14) one million doses of Coronavac arrived, raising hopes for the resumption of suspended vaccination programs.

Still, several LGUs announced that they will continue to suspend the distribution of coronavirus vaccines.

On July 7, the Quezon City government announced that it will be able to vaccinate only individuals who were scheduled for their second doses due to limited vaccine supply.

“We would like to inform everyone that the city’s supply for the first dose has already run out and the supplies scheduled for the second dose will be used and distributed in the following week,” the city government said in Filipino.

“The local government is still waiting for the new batch of vaccines from the national government,” it added.

The Quezon City government has yet to post an update as of this writing.

According to the vaccination schedules released by Manila Public Information Office for Tuesday and Wednesday (July 13 and 14), the city currently vaccinates only those who are scheduled to get their second doses.

Caloocan City Mayor Oscar Malapitan on Tuesday (July 13) said that the city will suspend vaccination for those who are set to receive second doses of Coronavac.

“We are currently waiting for additional supplies of Sinovac after a delay on the delivery,” Malapitan said.

“We expect to receive more doses in the following days,” he added.

In a statement, the Parañaque City Public Information Office said that the inoculation for the second dose of the Coronavac will be postponed in the city “due to regional vaccine shortage.”

Las Piñas City Health Office has issued a statement on Tuesday (July 13) announcing the suspension of vaccinations for the second dose of Coronavac.

The city government likewise cited vaccine shortage for the suspension.

The vaccination for the second dose of Coronavac has also been deferred since Monday (July 12) in Muntinlupa City.

“Based on the Advisory No. 62 of the National Task Force Against COVID-19, there will be a delay in the delivery of Sinovac in the country,” the local government said last July 10.

“Those whose schedule for second doses were adjusted will be prioritized once the allocation arrives,” it added.

Injections of residents who were supposed to get their second dose of Coronavac will be rescheduled to a later date, according to the Taguig City government.

The local government, however, assured the public that the second dose of Coronavac may still be given past the date indicated on the vaccination cards.

“Please stand by for updated vaccination schedules,” it continued.

The Marikina Public Information Office on Tuesday informed the public that the vaccination for the second dose of Coronavac will be postponed from July 14 to July 16.

The vaccination for the second dose of Sputnik V on July 16 was also put on hold.

According to Marikina Mayor Marcelino Teodoro, the national government has directed the city government to get some second doses to use as first doses.

In a response to a Facebook comment of a netizen, the city government of Navotas said that there is no schedule yet for the vaccination of Sputnik V vaccines.

“Reminder, the supply of Sinovac and AstraZeneca vaccines for the second dose has not yet arrived due to a delay in delivery,” said the Malabon City government in an advisory posted on Wednesday.

“Only those who were vaccinated with different vaccine brands, those who received a text message, or those whose names were posted on our Facebook page may receive their second dose today, July 14, in Malabon Elementary School and Fishermall Malabon,” it added.

Pateros Mayor Miguel Ponce III announced on Monday (July 12) that the municipal government will suspend vaccination for the first dose.

“We will temporarily halt the vaccination for the first dose because we currently have no supply of vaccine that we can use,” Ponce said in Filipino via Facebook Live.

“The public will have to wait for further announcement on when we will resume our vaccination for the first dose,” the mayor added.