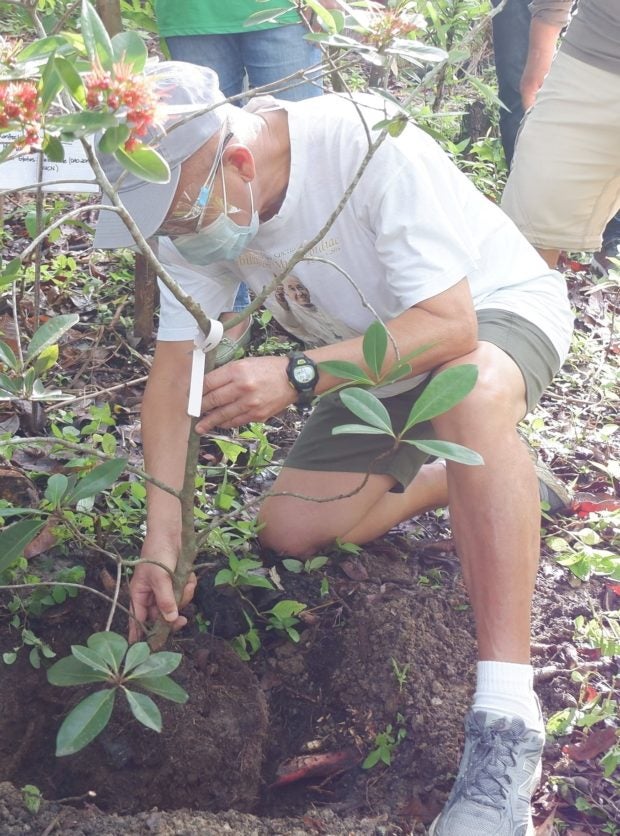 Jose Cardinal Advincula Jr. leads a tree-planting and launching of an arboretum of native trees at the Archbishop’s Residence in Roxas City in Capiz, days before he was installed as Archbishop of Manila. (Photo courtesy of Capiz Archdiocesan Social Action Center)

ILOILO CITY—Aside from leaving a 10-year legacy as Capiz archbishop and the first cardinal to hail from the province, Jose Cardinal Advincula Jr. has also left behind an arboretum of native trees.

On June 21, three days after a historic ceremony for the bestowal of his cardinal insignia, Advincula led a tree-planting activity at the launching of the Jose Cardinal Advincula Grove of Philippine Native Trees at the compound of the Archbishop’s Residence in Barangay Lawaan in Roxas City, the provincial capital.

The arboretum was established through the Capiz Provincial Environment and Natural Resources Office (CaPenro) and the Capiz Archdiocesan Social Action Center (CASAC) in honor of Advincula.

“It is not only his dream to establish an arboretum of native trees in (Roxas City), but a long time obsession in supporting urban foresting,” according to a CASAC statement.

It said the conservatory would have 45 native trees “as a special gift of the archdiocese for his 45 years of service to the Catholic Church and for his love and commitment in saving Philippine native trees.”

“Aside from this, the grove is a constant reminder for us that, as Christians, ‘we come to realize that our responsibility within creation, and our duty towards nature and the Creator, are an essential part of our faith’,” the statement added.

Church leaders and Capiz clergy, including Msgr. Cyril Villareal, Vicar General of the Archdiocese of Capiz, and CaPenro officials and personnel joined the cardinal.

He signed a memorandum agreement with the provincial government on June 16 for the arboretum establishment. Advincula, a native of Dumalag town in Capiz, was installed as the 33rd Archbishop of Manila on June 24.

He replaced Luis Antonio Cardinal Tagle, who was named by Pope Francis as prefect of the Congregation for the Evangelization of Peoples.

Advincula is the ninth Filipino cardinal and among the four who are still living, namely Gaudencio Rosales, Orlando Quevedo, and Tagle.