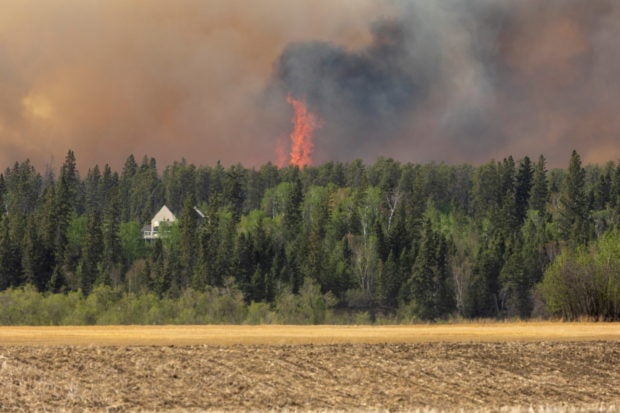 Wildfires burn near a house as the city of Prince Albert declared a state of emergency over a fast-moving wildfire, prompting some residents to evacuate, in Prince Albert, Saskatchewan, Canada May 18, 2021. (REUTERS)

OTTAWA  – Canada on Sunday ordered rail transport restrictions for areas where there is a high wildfire risk after a blaze wiped out the town of Lytton, British Columbia, and killed two people earlier this month.

The order will require both Canadian National Railway Co and Canadian Pacific Railway Ltd to take precautions against wildfires, including reducing train speeds, according to a Transport Ministry statement.

On Friday, Transport Minister Omar Alghabra ordered a 48-hour stop to rail transport in parts of British Columbia that expired on Saturday at midnight. The new restrictions took effect on Sunday morning and will remain until Oct. 31.

The order “will put in place interim measures while the department works with railway companies to incorporate these fire risk reduction measures on a permanent basis,” the ministry said.

CP said the company would comply with the directive, while CN said it would continue to strictly follow protocols and regulations when operating.

The Transportation Safety Board of Canada (TSB) said on Friday it was deploying teams of investigators to see if freight trains were potentially responsible for sparking two fires, including the one that ravaged Lytton.

The Lytton blaze erupted after the town broke Canada’s more than 80-year-old heat record with a 49.6-degree C (121.3 F) temperature. There are 297 wildfires burning in British Columbia, an increase of 97 in two days, according to official data.

In areas of the West Coast province facing extreme fire risk, CN and CP must ensure at least 10 fire detection patrols, remove combustible materials from the tracks and ask conductors to report fires they spot.

Nationally, trains will have to run at reduced speeds when there is extreme fire risk and when the outdoor temperature is high. CN and CP will also be required to come up with a fire risk mitigation plan and consult with indigenous communities about fire hazards.

The recent spate of fires had already disrupted shipments of goods in and out of the port of Vancouver.