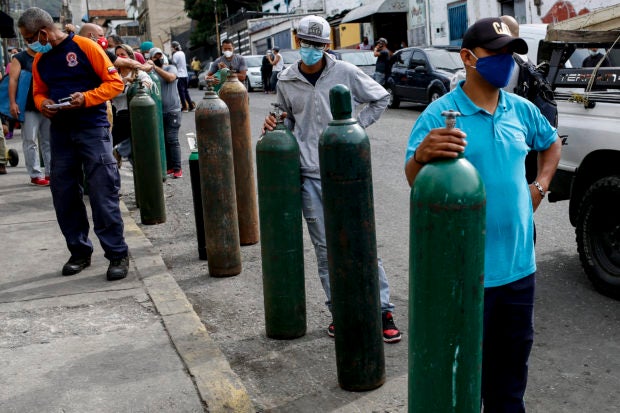 People queue to refill oxygen cylinders to be used by patients with COVID-19 in Caracas, on April 9, 2021. AFP FILE PHOTO

The highly transmissible Delta variant, first detected in India, is sweeping the world as countries race to inoculate their populations to ward off fresh outbreaks and allow for economies and daily life to resume.

“The recovery is characterized by great divergences across and within countries and remains exposed to downside risks, in particular the spread of new variants of the Covid-19 virus and different paces of vaccination,” the G20 finance ministers said in a final statement.

The European Union — lambasted early on in the pandemic response for a botched vaccine acquisition program — said on Saturday it has delivered enough shots to cover 70 percent of the bloc’s population.

“By tomorrow, some 500 million doses will have been distributed to all regions of Europe,” EU Commission President Ursula von der Leyen said.

But according to the European Centre for Disease Prevention and Control, the proportion of adults aged 18 years or over fully vaccinated in the EU and European Economic Area is still only 44.1 percent.

London police meanwhile warned England football fans on Saturday not to gather in large numbers in the British capital for Sunday’s Euro 2020 final at Wembley, adding that they would enforce “proportionately and as appropriate” nationwide virus restrictions not set to be lifted until July 19.

Supply shortages in South Korea have meant only about 11 percent of the country’s 52 million population is fully vaccinated, according to health authorities.

The nation, held up as a model of how to combat the pandemic, reported 1,378 new coronavirus cases on Saturday, a third straight record high.

From Monday, gatherings of more than two people will be banned after 6:00 pm, schools, bars and clubs will be closed.

In Pakistan, where less than eight percent of the population has been vaccinated, the government said only those who had received jabs would be allowed to fly.

The country of around 215 million people has largely escaped the worst of the pandemic, with under a million recorded infections and around 23,000 deaths — although cases are on the rise again.

Party’s over before starting

After an “exponential” rise in cases in recent days, officials in the autonomous northeastern Spanish region of Catalonia said they had no choice but to reimpose restrictions.

Nightclubs will close and a negative Covid-19 test or proof of vaccination will be needed to take part in outdoor activities involving more than 500 people.

“The pandemic has not ended, the new variants are very contagious and we still have significant segments of the population that are not vaccinated,” said Patricia Plaja, a spokeswoman for the regional government.

Russia also announced on Saturday that cases continued to surge and it had a new record number of daily deaths, the fifth since the beginning of the month.

State statistics agency Rosstat, which defines coronavirus-related deaths more broadly, put the figure at 270,000 by the end of April.

Less than 20 percent of Russians have received a single dose, despite shots of locally developed vaccines being readily available.

Despite the rising infections and deaths, 54 percent of a deeply sceptical Russian public don’t plan to get vaccinated, according to a survey by the independent Levada-Center published this week.

While vaccines have been successful in mitigating the worst effects of infections, concerns have been raised about how well some of them will cope with more virulent strains.

In Indonesia, which is fighting a ferocious wave of infections, more than a dozen fully inoculated frontline health workers have died, according to the country’s medical association.

Authorities said  Friday that medics would be given a third booster jab to provide extra protection, using the vaccine made by US company Moderna.

The Southeast Asian nation has been depending heavily on China’s Sinovax shots amid the global shortage of alternatives that have been mostly supplied to rich nations.

The rapid spread of the Delta variant across Asia, Africa and Latin America is exposing crucial vaccine supply shortages for some of the world’s most poorest and most vulnerable populations.

Senegal, the EU, the United States, several European governments and other partners, signed an accord in Dakar on Friday to finance vaccine production in the West African state.

And Cuba approved its home-grown Abdala vaccine for emergency use, the first Latin American coronavirus jab to get the green light and a possible lifeline for a region trying to battle a killer pandemic with modest means.