Fencing around US Capitol coming down six months after Jan. 6 attack | Inquirer News

Fencing around US Capitol coming down six months after Jan. 6 attack 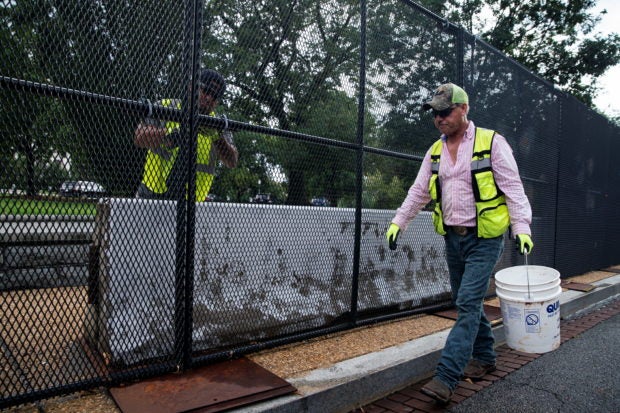 WASHINGTON — Workers began to remove the last of the high-security fence around the U.S. Capitol on Friday, more than six months after former President Donald Trump’s supporters launched a deadly assault on the home of the U.S. Congress.

The eight-foot-high (2.4-m) black mesh fencing at one point surrounded several blocks of Capitol Hill, interfering with pedestrian and vehicle traffic. The remaining sections, enclosing just the white-domed Capitol complex, will take about three days to remove, according to U.S. House of Representatives Sergeant-at-Arms William Walker.

The decision to take down the remaining fence was based on the U.S. Capitol Police’s assessment of the current threat and improved coordination with local and federal law enforcement agencies, Walker said in a statement.

More than 535 people have been charged with taking part in the attack, when Trump supporters smashed windows, fought police and sent lawmakers and then-Vice President Mike Pence scrambling for safety.

Five people died during the violence and in the day after, including a Capitol Police officer. Two police officers who took part in the defense of the Capitol later took their own lives. More than a hundred police officers were injured.

The rioters were trying to stop Congress from certifying President Joe Biden’s election victory, which Trump falsely has said was the result of widespread fraud. Multiple courts, state election officials and members of Trump’s own administration have rejected his claims as unfounded.

Some 20,000 National Guard troops were called into the city to defend the building afterward, with the last contingent not leaving until May.

Walker said the temporary fencing can quickly be reinstalled if needed and that other restrictions on access to the Capitol will remain in place. Tourists and other visitors have been barred from entering the Capitol since last year due to social restrictions prompted by the COVID-19 pandemic.

As the removal work began on Friday, Democratic lawmakers expressed concern that Congress has not paid the bills of the Capitol Police who stepped up operations and worked overtime since the Jan. 6 attack.

The House narrowly approved $1.9 billion for Capitol security in May with no Republican support, but the legislation has stalled in the Senate, which is evenly divided along party lines. Senate Appropriations Committee Chairman Patrick Leahy, a Democrat, said action was needed, otherwise “Capitol Police projects they will deplete salaries funds sometime in August.”