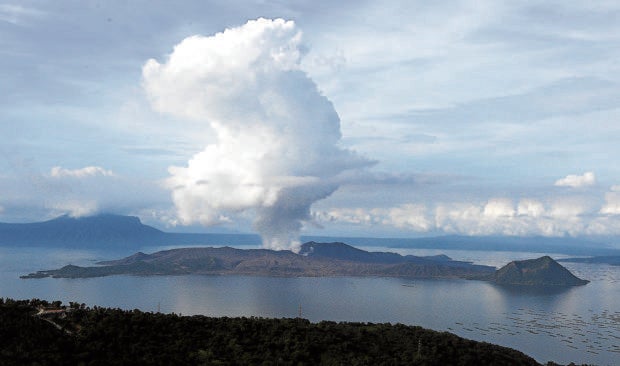 MANILA, Philippines — The Philippine Institute of Volcanology and Seismology (Phivolcs) on Sunday recorded 74 volcanic earthquakes in Taal Volcano in the last 24 hours, indicative of the volcano’s continued unrest.

Of the 74 volcanic earthquakes, 61 were tremors that had durations of one to 25 minutes, while 13 were low frequency quakes.

Low-level background tremor has persisted since July 7, according to Phivolcs.

Phivolcs added that the volcano’s sulfur dioxide (S02) emission averaged 6,488 tons on July 10, after it emitted SO2 reaching 1,000 meters and drifted west-northwest and southwest.

Alert Level 3 is still in effect, meaning magma extruding from the volcano’s main crater could trigger an “explosive eruption.”

The alert level was raised after Taal Volcano had a phreatomagmatic eruption on July 1, 2021.

Meanwhile, Phivolcs again reminded the public that the entire Taal Volcano Island is a permanent danger zone, which means entry into the island as well as into the high-risk barangays in the towns of Agoncillo and Laurel is prohibited due to the hazards of pyroclastic density currents and volcanic tsunami should strong eruptions occur.

“Phivolcs maintains its close monitoring of Taal Volcano and any new development will be communicated to all concerned stakeholders,” the agency added.