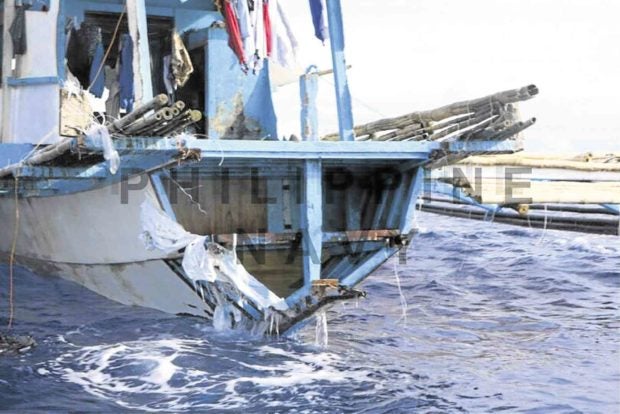 CITY OF CALAPAN, Oriental Mindoro, Philippines — The representatives of the Chinese company that owns the steel-hulled trawler that damaged and abandoned the Filipino fishing boat Gem-Ver 1 have made a counteroffer of only P3.6 million in compensation, just about a quarter of the P12 million sought by the aggrieved party.

The Filipino crew members were saddened by the counteroffer but agreed among themselves to settle for at least P6 million, the Inquirer learned on Saturday.

Formal negotiations began only last June, some two years after the Chinese trawler Yuemaobinyu 42212 hit Gem-Ver 1 shortly before midnight of June 9, 2019, while the 14-ton boat was anchored at Recto Bank in the West Philippine Sea, some 270 kilometers west of Palawan province.

The 22 Filipino fishermen on board were abandoned in the open sea until they were rescued about two hours later by a passing Vietnamese fishing boat. What remained of Gem-Ver 1 was later towed back to San Jose, the fishermen’s hometown in Oriental Mindoro.

On Aug. 28 that year, the Guangdong Fishery Mutual Insurance Association issued a public apology on behalf of the owner of the Yuemaobinyu, whom the association did not name.

The statement described Gem-Ver 1’s sinking as an “accident” and asked the Philippines to file a claim for compensation.

President Duterte also described the sinking as a “little maritime accident,” in contrast to the strongly worded protests issued by his defense and foreign secretaries.

Felix dela Torre, who replaced his mother as the new owner of Gem-Ver 1 after the incident, told the Inquirer that he and the other fishermen went to an office of the Department of Justice in San Jose on Friday to discuss the counteroffer in a video meeting with Justice Undersecretary Adrian Sugay.

Dela Torre said the counteroffer did not include moral and emotional damages, as Guangdong Fishery was only willing to extend P3.6 million for “boat repairs and loss of income for four months.”

The Chinese group estimated the boat repair at P1.6 million and lost income at P2 million, he said, adding that the crew members were saddened by the development.

Dela Torre said the P3.6 million being offered was not enough since it cost them P2.3 million just to repair the boat.

‘’We are are sad. I could not decide by myself, so I asked my companions: Are you going to take it or ask for more? Then we agreed [to settle] for at least P6 million,’’ he told the Inquirer.