Looking back at Duterte’s Sona promises 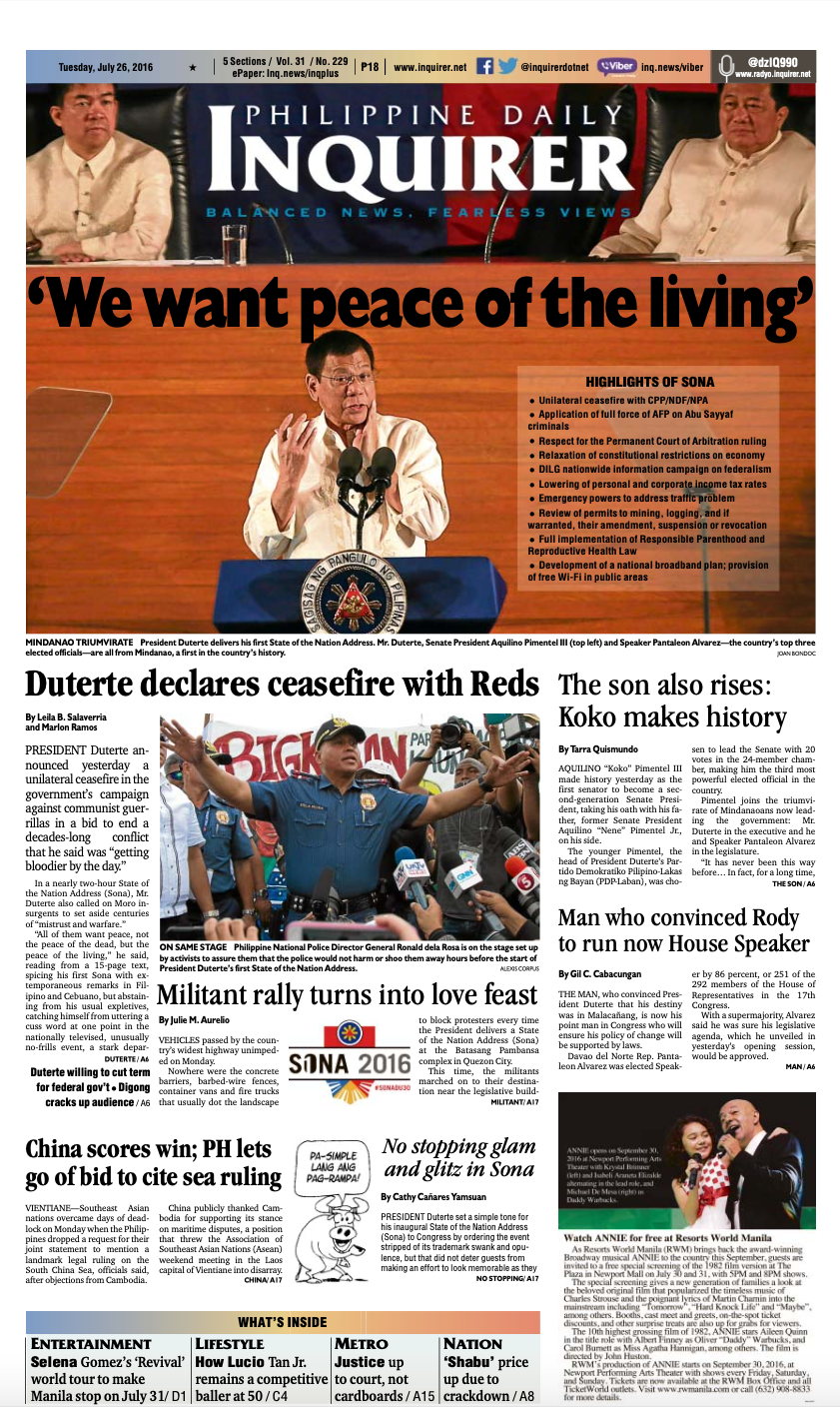 MANILA, Philippines — With a year left in his term, President Rodrigo Duterte is set to deliver his sixth and final State of the Nation Address (Sona) on July 26. In his first Sona in 2016, a 90-minute speech that was warmly received as it rode on the euphoria of his May election victory, he mainly promised more jobs, giving special attention to the plight of overseas Filipino workers, the state of local agriculture, and the overall investment climate.

There were big goals and low-hanging fruits; he pledged to provide universal health insurance, solve Metro Manila traffic, protect human rights while upholding the rule of law. And more emphatically, he vowed to wage a “sustained and relentless’’ war on drugs.

Five years later, to say that Mr. Duterte has proven to be a deeply divisive leader would be an understatement. Allies, with eyes on the 2022 elections, are expectedly singing praises over what they have chalked up to be his accomplishments despite the last third of his term being hobbled by the pandemic. Lately they have amped up the chorus, egging on the 76-year-old to sustain the supposed momentum by running for vice president next year (despite the constitutional restriction). Critics, on the other hand, are ready to remind all about the blood spilled, the lives lost, the public spendings that need to be explained and other official narratives that must be fact-checked.

Starting today is a series of Inquirer reports revisiting the promises made and directions set by the President since his first policy-defining speech before Congress.

In November 2017, the President directed the National Economic and Development Authority (Neda) board to take “immediate steps” to ease foreign investment limits in telecommunications, retail and construction. This was a week after he offered China the “privilege’’ of operating the third telco player in the country.

Lawmakers have since filed pertinent bills, but Mr. Duterte certified as urgent only in April this year the proposed amendments to the Public Service Act, the Foreign Investments Act and the Retail Trade Liberalization Act.

Last month, the House voted 251-21 to adopt a resolution changing the Constitution’s “restrictive” economic provisions, amid strong objections from some senators and business groups. The resolution is still pending at the committee level in the Senate.

Early in the Duterte administration, banking regulators sought amendments to Republic Act No. 1405, the banking secrecy law, which has been in effect for almost 66 years. They say it allows illegal activities to prosper in the local financial system.

The Bangko Sentral ng Pilipinas also needs these amendments to make the banking system at par with international standards and reinforce the government’s anticorruption efforts.

Mr. Duterte has yet to certify the bills amending the 1955 law. The draft measures are still at the committee level in both the House and Senate, including those that exclude government officials from protection and increase the fines and prison terms for those who misuse information on bank accounts.

Despite this early pledge to improve the country’s notoriously slow internet speed, the Philippines continues to lag behind in online connectivity based on international comparative reports. As a flagship project under the “Build, Build, Build” program, the P20.3-billion National Broadband Plan (NBP) is expected to be finished at least a year after Mr. Duterte steps down, according to the latest Neda list.

The Department of Information and Communications Technology (DICT) asked for P13.5 billion for the NBP this year. It was given only P4.35 billion, a budget to be shared among various programs, including the Free Wi-Fi for All (formerly known as Pipol Konek, launched in 2015), the NBP and the national government portal.

Sangley now has a 2,400-meter runway and a terminal that can accommodate 160 passengers. Clark has a new passenger building that can cater to 8 million international travelers a year. In 2018, Duterte inaugurated the new terminal of Mactan-Cebu International Airport, a project started by the Aquino administration.

A total of 21 other airports were upgraded to allow nighttime operations. General Santos City Airport and Bicol International Airport are expected to be finished this year, while eight other projects will be completed after Mr. Duterte’s term ends, according to Neda.

The Japanese-funded rehabilitation of MRT 3 which began in May 2019 included the overhaul of the railway’s 72 aging cars, rail replacement works, upgrade of the signal and communication systems, and the rehabilitation of escalators and elevators.

MRT 3 management said 23 trains were deployed on the main line in January, up from the usual 10 to 15 running trains before improvements started. It also reported that the trains began hitting 60 kilometers per hour in December last year, cutting travel time from the North Avenue station to Taft Avenue from an hour and 15 minutes to 50 minutes.

The management attributed the speed improvement to rail replacement works completed in September 2020, ahead of the February 2021 schedule. Average waiting time for passengers is now 3.5 to 4 minutes, from the previous 8 to 9.5 minutes.

In December 2019, the Metropolitan Manila Development Authority officially relaunched the Pasig River Ferry Service, which has undergone several, short-lived revivals since introduced in the 1980s.

Due to the coronavirus pandemic, service was suspended for four months and resumed at a limited capacity in August 2020. As of March this year, the 11 vessels in operation can accommodate a combined total of 455 passengers per one-way trip.

Also under “Build, Build, Build” is the $500-million Metro Manila Flood Control Management Project, the first phase of the flood management master plan was approved in 2012 (under the Aquino administration) but started only in January 2018. The World Bank and the China-led Asian Infrastructure Investment Bank each contributed $207.6 million for the project. The balance of $84.7 million would be funded by the Philippine government.

Slated for completion in 2024, it aims to reduce flooding from the river systems by building a dam in the Marikina River catchment area. The goal is to minimize peak flows entering Metro Manila during typhoons, improve flood forecasting and early warning systems, modernize the 36 pumping stations mostly built in the 1970s, and construct 20 new stations.

In its November 2020 report, the World Bank described the status of the project as “moderately unsatisfactory” and gave it an overall risk rating of “substantial.” At that time, only $6.93 million, or 3.3 percent, of the World Bank financing had been spent over two years since the loan was given in March 2018.

• Extend the validity of drivers’ licenses to five years

In August 2017, a year after making this promise, Mr. Duterte signed into law the bill extending the validity of drivers’ licenses from three years to five. Republic Act No. 10930 amended Section 23 of the Land Transportation and Traffic Code.

The law also allows professional and nonprofessional drivers who are not cited for any traffic violation during a five-year period to enjoy a 10-year license validity, though still subject to some restrictions imposed by the Land Transportation Office (LTO). The LTO said it would roll out this incentive in October this year.