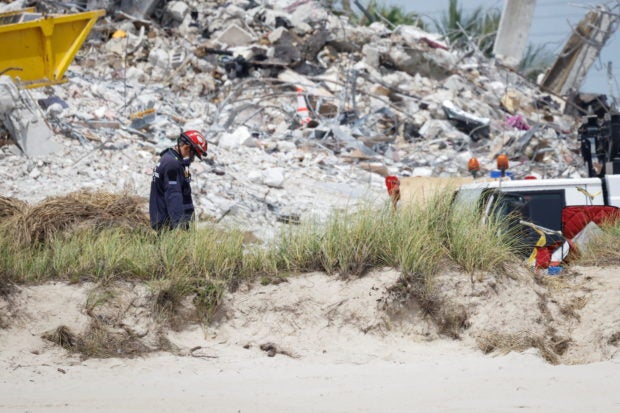 A rescue worker is seen as search-and-rescue efforts resume the day after the managed demolition of the remaining part of Champlain Towers South complex in Surfside, Florida, U.S. July 5, 2021. (REUTERS)

The confirmed death toll in the collapse of a Miami-area condominium tower rose to 79 on Friday after workers recovered an additional 14 bodies and had reduced the pile of rubble down nearly to ground level.

A total of 61 people remain missing and feared dead in the concrete and steel ruins of the 12-story building in the oceanfront town of Surfside, Miami-Dade County Mayor Daniella Levine Cava told a news conference.

The number of missing could change as it remains possible that not all were in the building when it abruptly crumbled to the ground in the early hours of June 24. Officials have yet to determine the cause of the disaster.

Surfside Mayor Charles Burkett said crews have cut the size of the building debris pile from four or five stories to nearly ground level, with some areas at below-ground level.

Investigators have not determined what caused the Champlain Towers South to fall apart without warning. Attention has been focused on a 2018 engineering report that warned of structural deficiencies.

Read Next
After hottest June ever, U.S. braces for new heatwave in West
EDITORS' PICK
Metro Manila logged most number of new COVID-19 cases — OCTA Research
WHO says monkeypox is not yet a health emergency
House energy committee chair Arroyo bats for cheap electricity
A massive highway complex makes living in the South highly attractive
Beyond the Chocolate Hills: A farm-to-table, heritage culinary adventure of Bohol
Guarding Sara: Why next VP is getting own security team
MOST READ
Leon Barretto steps up for sisters, asks dad Dennis Padilla: ‘Please stop resorting to public shaming’
LOOK: Rita Daniela pregnant with first child
Bea Alonzo, under lie detector test, says she wants prenup agreement with future husband
Marjorie Barretto to speak up on Dennis Padilla, kids’ relationship ‘in time’
Don't miss out on the latest news and information.