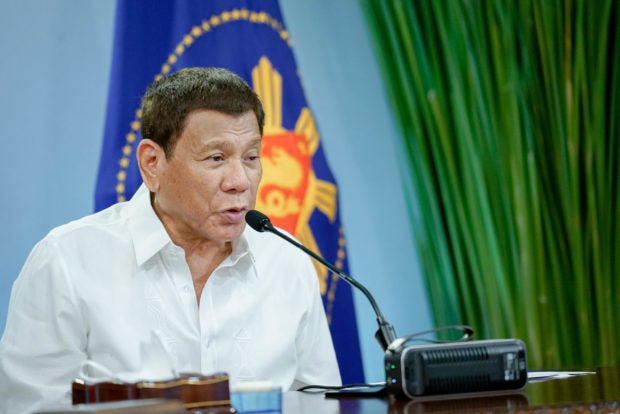 There’s nothing in the Constitution that prohibits President Duterte from running for Vice President in the 2022 elections, Justice Secretary Menardo Guevarra said on Friday.

The justice secretary made the opinion after critics of the 76-year-old leader vowed to prevent Duterte from running for Vice President because it was just a ruse so he could become President again.

“From a strictly legal point of view, the Constitution does not prohibit an incumbent elected President from running for Vice President in a subsequent election,” Guevarra told reporters.

“If the framers of the Constitution intended to make the sitting President ineligible to assume the presidency again by succession after his six-year term has expired, it would have been quite easy for them to expressly say so in the Constitution,” he argued.

He said Section 4, Article VII of the Charter states that “the President shall not be eligible for any reelection” and “reelection means election to exactly the same office.”

“A careful reading of the Constitution would reveal that there is no expressed prohibition for the sitting President to run for a lower public office position,” he said in a statement.

“Under the plain meaning rule, or verba legis, if the statute is clear, plain and free from ambiguity, it must be given its literal meaning and applied without interpretation,” he added.

Roque said groups planning to challenge Mr. Duterte’s bid for the vice presidency before the Supreme Court may do so as long as they have the legal standing.

“Legal standing” is defined as a personal and substantial interest that will be damaged directly by the act being challenged.

But Roque said that Mr. Duterte had not even made a final decision on his 2022 plans.

“There is no legal impediment for President Duterte to seek the vice presidency,” Roque said.

“President Duterte is not running for the same office and same position,” he added.

But former elections commissioner Christian Monsod, one of the framers of the Constitution, said Mr. Duterte was just planning to run for Vice President so he could become Chief Executive once more.

“It is clear that it is just a plan to go through the backdoor and to circumvent the constitutional provision that bans him from occupying the Office of the President again,” he said.