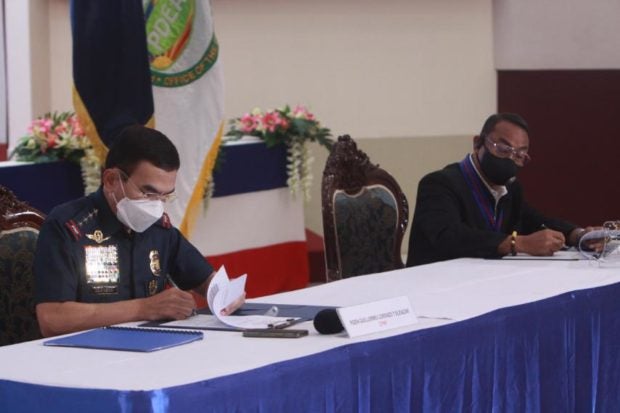 PNP chief Guillermo Eleazar and PDEA Director Wilkins Villanueva signed an agreement for a unified operational guideline during a ceremony in Camp Crame in Quezon City. Photo courtesy of PNP-PIO.

PNP chief Guillermo Eleazar and PDEA Director Wilkins Villanueva signed the unified guidelines following the fatal shootout between PNP and PDEA operatives at a mall along Commonwealth, Quezon City last February which killed five people, and a near misencounter in Fairview last May.

“Despite the fact that there were only two unfortunate incidents out of the thousands of joint operations that we conducted in the last five years, the humility from both sides to admit that the existing protocols need to be updated led us to this Unified Coordination Guidelines,” Eleazar during the signing ceremony held at the PNP National Headquarters, Camp Crame in Quezon City.

Villanueva, for his part, said the circular would make “the lines of communication” between the PDEA and PNP “clearer.”

“The circular should eliminate any misunderstanding, miscommunication, and misencounter between drug law enforcement units that impede the drug supply reduction efforts of the government’s anti-drug campaign,” Villanueva said.

One of the provisions said that only the PNP Drug Enforcement Group (PDEG) and Drug Enforcement Units (DEUs) of regional, district, provincial, city, municipal, and police stations, are authorized to conduct anti-illegal drug operations with coordination to PDEA.

“Other operating units are not allowed to conduct anti-drug operations on their own unless jointly done with PDEG and the concerned DEUs that will lead and initiate coordination with PDEA,” Villanueva explained.

A “one jurisdiction, one operation” policy will also be observed, according to Villanueva: “There shall only be one anti-drug operation in a particular area at a particular time covering areas of jurisdiction of PNP stations.”

Anti-drug-operatives and police officers who would fail to observe the guidelines would receive either administrative or criminal sanctions, pursuant to existing civil service rules and the applicable laws and regulations, as agreed by the two agencies.