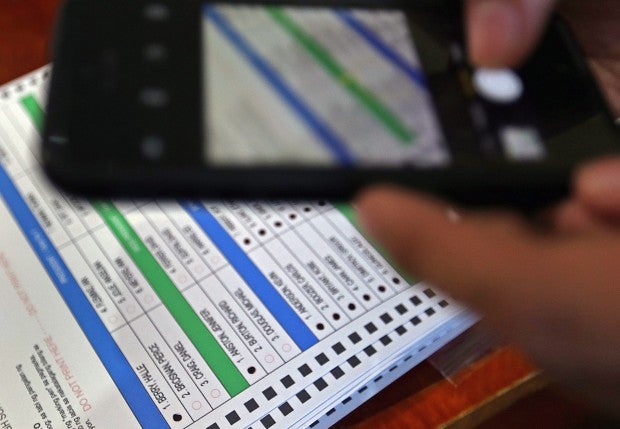 Vote Pilipinas, partner of the Commission on Elections, urges Filipinos eligible to vote to register in order to become a voter for the coming 2022 national elections. INQUIRER FILE PHOTO / RAFFY LERMA

MANILA, Philippines — Filipinos who wish to vote in the 2022 national elections have only less than three months left to register, or until September 30, a group advocating for voter registration reminded on Thursday.

During the #MagparehistroKa virtual town hall meeting, Vote Pilipinas, the official private information campaign partner of the Commission on Elections (Comelec), had various advocacy groups and Comelec officials talk about the importance of registering, especially for new voters.

Comelec Commissioner Rowena Guanzon who spoke during the virtual forum highlighted that voting is where people can choose whether they want to change how the government works or if they want to maintain the current setup.

However, she also noted that people cannot vote if they do not register.

“Registry is not only choosing the candidate that you like, but to move as a people, so I ask the Catholic schools, why don’t you excuse your students half a day on a Saturday, or half a day on a Friday, no online class, and you make sure that you register?” Guanzon suggested.

“Because without registration there is no way you can… obviously you cannot cast your vote.  You know, if people want to change their government, or they want to retain the government, then this is the exercise of their power, (it’s) the vote that can do that for them.  So again, we cannot overemphasize the need to register,” she added.

Guanzon also stressed that the 2022 national elections would not be ordinary, not only because it is a presidential election, not just because the Philippines is still suffering from the COVID-19 pandemic, but also due to the fact that the country is facing a myriad of problems.

“It is also an election like no other because well, if you’re electing a president, not only that we are in a pandemic, but our country which is not rich, is in debt, well because the government had to solve the pandemic, I mean all the health issues rising from the pandemic,” Guanzon said.

“Our economy is in a bad shape, and unemployment is what, around what, 3.8 million?  And I wonder how many of those are women.  So it’s going to be a hotly contested election,” she added.

Vote Pilipinas is a non-partisan initiative to urge Filipinos to register for the 2022 national elections.  A quick visit to its website votepilipinas.com would show information that aspiring voters may need, from the registration steps to the required documents, to other questions that would be answered by a chat support system.

A survey form that would guide potential voters also pops out, with users simply needing to input their date of birth, place of residence, and other questions which would eventually lead to a detailed step-by-step process for registration.

According to Ces Rondario, Vote Pilipinas lead convener, the initiative was borne from the startup community’s yearning to contribute to society, especially for the upcoming elections.

“This really started because you know, the community that I represent, the startup community, have always been wanting to be involved in creating solutions and providing innovative headways to making sure that the Philippines (is) advancing,” Rondario said.

“The goal is to commit our partners in the community of the startup, the ecosystem, and also the people that we work with — our partners in government, in corporate, and in civil society that we collaborate with continuously,” she added.

Latest data presented by Director James Jimenez, Comelec spokesperson, showed that there are around 60 million voters who are registered to vote in 2022, including 4.3 million new voters.

Jimenez said that they would be expecting around 61 million to 62 million before the registration ends on September 30.

“Right now, as of last count we have around 60 million in the registry, that means we already have 60 million who are registered to vote.  We are on track to reach around 61 million by 2022, which is good because 61 million was where we were at in the last elections in 2019,” he said.

“As far as the new voters are concerned […] as of last week we had already hit 4.3 million, and we’re expecting maybe another million in the next two months, so that would be a very great development considering that of course, when you have elections like this, you want as many voters as possible,” he added.

According to Jimenez, the most important thing to do so that potential voters would register is to inform them that registration is still on-going, adding that some actually thought registrations have been suspended or were ended due to the COVID-19 pandemic.

“Well the most important thing really is that we have to get the word out, right?  That registration is still ongoing.  That’s the thing, during a pandemic people tend to fear that the registration isn’t going on, or that it’s been suspended, or that it’s a difficult process,” Jimenez explained.

“What we have to do is we have to make people understand that voter registration even during the pandemic, number one, is available; number two, is safe.  And that is very important,” he added.