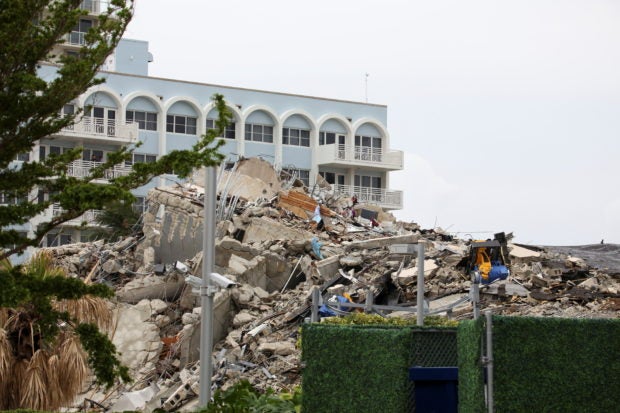 Debris is seen after the managed demolition of the remaining part of Champlain Towers South complex as search-and-rescue efforts continue in Surfside, Florida, U.S. July 6, 2021. (REUTERS)

SURFSIDE, Fla. – Crews recovered 18 more bodies on Wednesday in the ruins of a Miami-area condo complex that collapsed nearly two weeks ago, and Florida officials said there was no longer hope that any of the nearly 100 people still missing might be found alive.

A total of 54 bodies have been recovered from the ruins of the Champlain Towers South building so far.

“It is with profound sadness that I’m able to share that we made extremely difficult decision to shift from operation search and rescue to recovery,” Miami-Dade County Mayor Daniella Levine Cava told an afternoon news conference.

Read Next
Tropical Storm Elsa weakens as it passes over northern Florida
EDITORS' PICK
NCR’s COVID-9 alert level may be downgraded from 3 to 2 soon — DOH
What’s at stake for every fighter at ONE: NextGen
Legarda emphasizes role of ICC/IPs in nation building this IP month
Isko Moreno bares ‘two-pronged’ approach to rehabilitate MSMEs
Climate Change Commission and Nestlé PH to discover sustainability-focused solutions
Gordon calls 2 Pharmally execs ‘Senate fugitives’ after no-show in probe
MOST READ
LJ Reyes says Paolo Contis made ‘no efforts’ to talk to her after their split
Gordon to Duterte: You? Teaching me courtesy?
Gordon calls 2 Pharmally execs ‘Senate fugitives’ after no-show in probe
PDP-Laban Cusi wing Senate bets willing to give way to Duterte
Don't miss out on the latest news and information.