WHO-Unicef report: Nearly half of Filipinos get safe drinking water 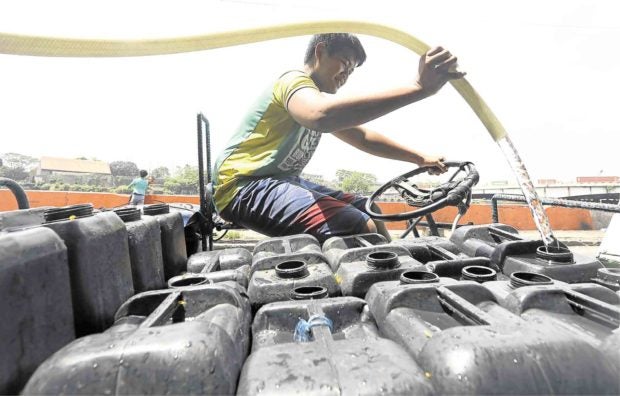 MANILA, Philippines—Clean drinking water, sanitation, and hand washing facilities, which are among people’s basic needs, were made more accessible for Filipinos in 2020, according to a report released this June.

This was in line with the 2015 pledge made by countries to work toward universal access to safe drinking water, sanitation and basic hand washing facilities by 2030, targets under the sixth Sustainable Development Goal (SDG) set by the UN General Assembly (UNGA).

“Clean water is a basic human need, and one that should be easily accessible to all. There is sufficient fresh water on the planet to achieve this,” UNGA explained.

“However, due to poor infrastructure, investment and planning, every year millions of people—most of them children—die from diseases associated with inadequate water supply, sanitation and hygiene,” it said.

According to the Department of Health (DOH), most cases of food poisoning and water-borne in the Philippines were often caused by unsafe sources of drinking water and improper disposal of human waste.

READ: Food safety: How not to die or get sick while eating

Data from the JMP report, titled “Progress on household drinking water, sanitation and hygiene”, showed some improvements in achieving SDG targets in the Philippines.

The first target is to achieve “universal and equitable access to safe and affordable drinking water for all” by 2030.

A safely managed drinking water service was defined by WHO and Unicef as “one located on premises, available when needed and free from contamination.”

In 2020, at least half or 47.46 percent of the Philippines’ population had access to safely managed drinking water. 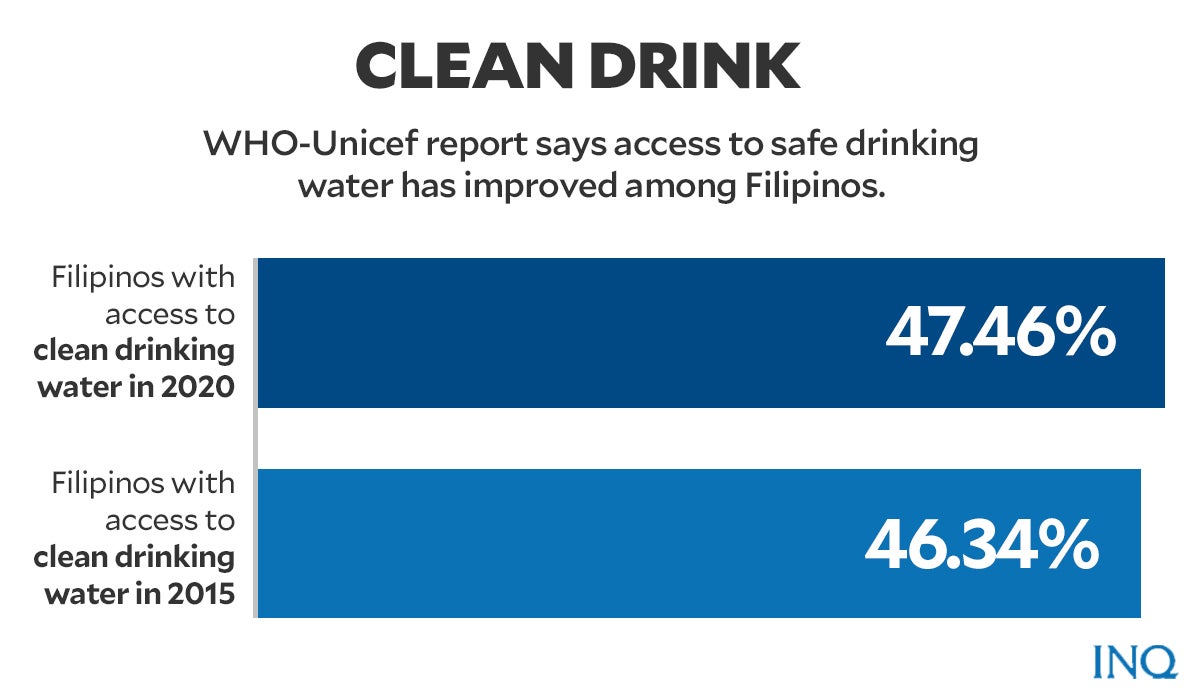 Majority, or 61.80 percent of the population in urban areas and 34.54 percent in rural areas, had access to safely managed drinking water in 2020.

At least 46.64 percent of Filipinos have access to basic improved water sources—piped water, boreholes or tube wells, protected dug wells or springs, rainwater, and packaged water—that are safe but require at least 30 minutes of travel back and forth to collect.

Around 2.86 percent had access to limited improved water sources which takes over 30 minutes of roundtrips to collect.

The Philippines also saw an improvement in access to adequate and equitable sanitation and hygiene.

The WHO-Unicef report said 60.64 percent of the Philippines’ population had access to safely managed sanitation facilities in 2020.

In 2015, only 54.77 percent had access to “improved facilities which are not shared with other households and where excreta are safely disposed in situ or transported and treated off-site.”

Filipinos in rural areas had better access to sanitation facilities in 2020 with at least 65.84 percent. About 54.86 percent of the population in urban areas had safely managed sanitation. 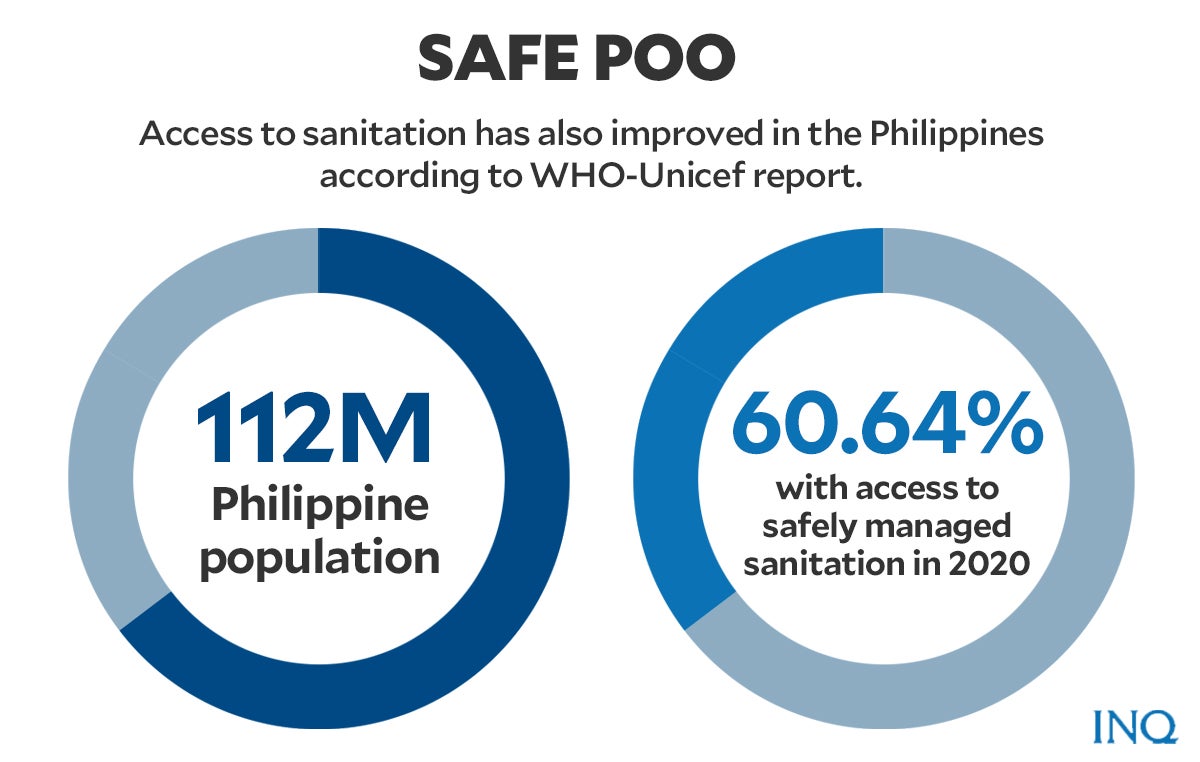 Hand washing and proper hand hygiene, according to WHO, are considered the first line of defense against coronavirus.

The Center for Disease Control and Prevention (CDC) in the United States said that keeping hands clean may help prevent the virus from spreading.

“Regular hand washing is one of the best ways to remove germs, avoid getting sick, and prevent the spread of germs to others. Whether you are at home, at work, traveling, or out in the community, find out how hand washing with soap and water can protect you and your family,” said CDC.

The practice likewise helps prevent the transmission of other diseases such as diarrhea, cholera, and typhoid.

In the Philippines, the DOH has been reminding the public to make a conscious effort to maintain personal hygiene “such as washing of the hands for 20 seconds at the palm and the back of the hands and digits.”

Last year, 81.71 percent of Filipinos had access to basic hand washing facilities with soap and water.

At least 85.27 percent of residents from urban areas and 78.51 percent in rural areas were able to practice hand washing with basic hand washing facilities in 2020.

While data showed positive results and improvements for the Philippines, the WHO and Unicef noted that the world’s progress is not yet enough to provide universal access to safe drinking water, sanitation.

“Five years into the SDGs, the world is not on track to achieve SDG targets 6.1 (achieve universal and equitable access to safe and affordable drinking water for all) and 6.2 (achieve access to adequate and equitable sanitation and hygiene for all and end open defecation),” the report read.

Last year, 74 percent of the world population had access to a safely managed water source—this means that one in four people have no access to safe drinking water.

The report also said that at the onset of the COVID-19 pandemic, at least three in 10 people globally could not wash their hands with soap and water at home.

The number was only four percent more than the 70 percent recorded in 2015.

According to Hannah Ritchie, senior researcher and head of research at Our World In Data, the slow progress could lead to only 82 percent of the goal achieved by 2030.

“Hand washing is one of the most effective ways to prevent the spread of COVID-19 and other infectious diseases, yet millions of people across the world lack access to a reliable, safe supply of water,” said WHO Director-General Dr. Tedros Adhanom Ghebreyesus.

“Investment in water, sanitation and hygiene must be a global priority if we are to end this pandemic and build more resilient health systems.”

Nearly half of the world’s population does not have access to safe sanitation.

In 2020, 54 percent had access to safely managed sanitation while at least six percent do not have any sanitation facilities and most likely practiced open defecation.

The figure has already improved compared to 47 percent of the global population that had safe sanitation but the progress has been too slow.

“The gap between where we are now and universal access is still huge. Our progress is far too slow to achieve this by 2030,” said Ritchie.

“Almost one-third of the world would miss out. If we’re to meet our target we need almost exactly the same acceleration as our progress on drinking water: rates would need to more than triple (increase 3.3-fold) for the coming decade,” she added.

From 2015, there has only been a four percent increase. If this rate of progress persists in the coming years, by 2013 the world would reach only 79 percent of its goal.

“One-in-five people would still be without access” to hand washing facilities, according to Ritchie.