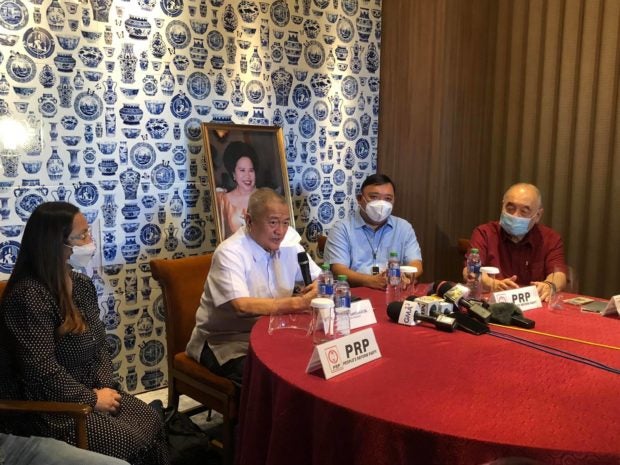 MANILA, Philippines — The late Senator Miriam Defensor-Santiago may no longer be around, but her political party is throwing its “full support” behind the potential presidential bid of Davao City Mayor Sara Duterte-Carpio, daughter of her erstwhile rival for the presidency in 2016.

“The People’s Reform Party founded by the late Senator Miriam Defensor-Santiago, will give its full support to the presidential daughter and Davao City Mayor Sara Duterte-Carpio if she decides to run for president the 2022 national elections,” said Santiago in a press briefing at the Edsa Shangri-La Hotel.

Roque, who was present during the briefing, expressed the belief Duterte-Carpio can continue Defensor-Santiago’s legacy.

“It just so happened that she’s also a woman, but I think the principles for which you (Defensor-Santiago) lived for continue to be alive and well in the person of Sara Zimmerman Duterte-Carpio,” said Roque.

According to the PRP president, the party last teamed up with Duterte-Carpio’s regional party, Hugpong ng Pagbabago, on December 3, 2018, after signing an alliance agreement for the 2019 elections.

This alliance may be renewed for the 2022 elections if Duterte-Carpio decides to run, Santiago said.

During the 2016 national elections, Senator Defensor-Santiago again filed for candidacy for the presidency and was pitted against Duterte, who eventually emerged as the winner after gaining 16 million votes.

In September 2016, Defensor-Santiago passed away after battling lung cancer. She was 71.