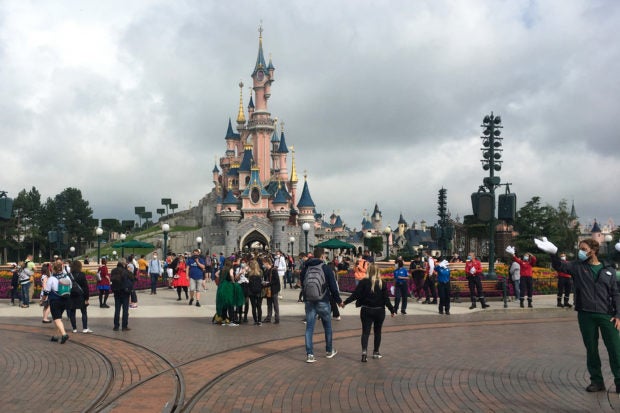 Visitors and staff wearing protective face masks, walk down the Main Street of Disneyland Paris in Marne-la-Vallee, near Paris, on July 15, 2020, as Disneyland Paris begins phased reopening after months-closure aimed at stemming the spread of the novel coronavirus (COVID-19). AFP FILE PHOTO

PARIS — Disneyland Paris, Europe’s biggest tourist attraction, on Tuesday apologized to a mother after two members of its security staff ordered her to stop breastfeeding her baby in public.

Another female visitor drew attention to the incident on Sunday, tweeting indignantly that two security agents had “prevented a mother from breastfeeding her two-year-old baby on the grounds that it shocked foreign clients. In France, in July 2021!”

The tweet was accompanied by a picture of the two agents standing over two women sitting on a bench, one of them holding a small baby. In another tweet, the witness said the mother was Australian.

Responding to the messages, on which the French government was copied, Disneyland said Tuesday it “profoundly regrets this situation and present once more our apologies to the mother in question”.

The agents’ actions were “not compatible with our regulations and our values”, it said, insisting “there is no restriction on breastfeeding at Disneyland Paris”.

It also added that it offered “different places” at the site “for those who prefer a dedicated place” to nurse their children.

In its first Twitter response to the incident on Monday, Disneyland had struck an unapologetic tone, saying only that mothers had the use of special rooms “with suitable and comfortable material such as special breastfeeding seats”.

It changed its tune after being castigated on Twitter by France’s minister for citizenship, Marlene Schiappa, who was previously minister for gender equality.

“Dear @DisneylandParis, breastfeeding a baby is not an offense. It’s good that you have dedicated rooms but no-one knows when and where a baby will be hungry,” she wrote.