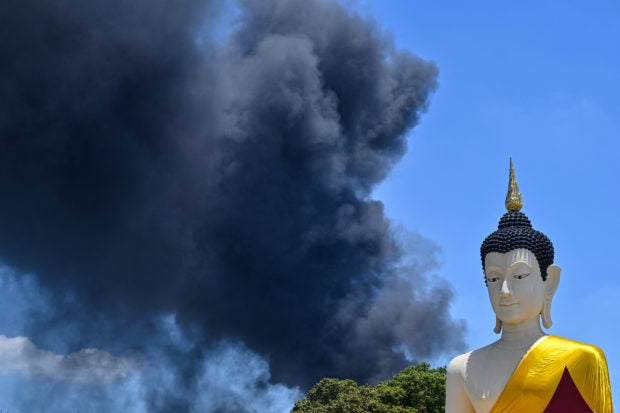 A Buddha statue is seen as smoke billows from an explosion and fire at a plastics factory on the outskirts of Bangkok on July 5, 2021. AFP

BANGKOK — A smoldering plastics factory near Bangkok briefly reignited on Tuesday afternoon, hours after rescue teams brought the monster blaze under control in the early hours of the morning.

An explosion at the factory early Monday sent heavy plumes of black smoke across the city skyline, killing one firefighter and injuring 33 people.

The blast occurred around 3 am Monday at Taiwan-owned Ming Dih Chemical Co., located on the outskirts of Bangkok near Suvarnabhumi Airport in Samut Prakan province.

More than 1,600 people had been forced to take temporary shelter at 10 sites.

The cause of the explosion is still unknown.

Authorities said the fire was brought under control at 4am Tuesday but by late afternoon a blaze briefly reignited and thick smoke plumes billowed beneath cloud cover and rain, posing a health risk to people in the area.

Factory manager Suphab Mankong said it was likely there could be further flare-ups.

“It erupted under the warehouse next to the office building,” he told reporters.

Asked about the amount of chemicals left at the site he said: “We do not know.”

“We need to add more foam between the gap in the ground and the concrete floor. We have to keep doing it as foam will melt, it will be possible (it could) erupt again.”

Samut Prakran governor Wanchai Kongkasem said about 53,000 people in 30 communities had been affected by the incident.

The Department of Disaster Prevention and Mitigation said 15 cars and 100 houses were damaged.

Earlier on Tuesday, mourners gathered at at Bangkok Buddhist temple to pay tribute to Korasit Raopan, a 19-year-old firefighter who lost his life battling the blaze on Monday, local media reported.

Firefighters are also battling a separate fire at a bathroom and bedroom fixtures and hand sanitizer factory at Ladkrabang industrial zone 20 kilometers away from the plastics factory on Tuesday evening.