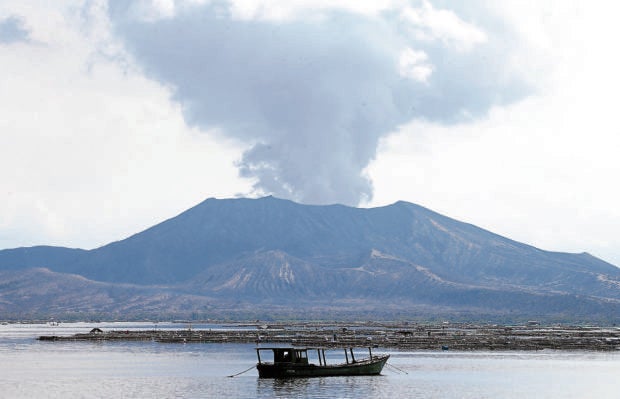 VOLCANOWATCH Residents in communities within the danger zone of Taal Volcano in Batangas province have left their homes to ensure their families’ safety amid the volcanic unrest. Steam-driven plumes are seen on Taal in this photo taken in Agoncillo town, Batangas, on Monday. —NIÑO JESUS ORBETA

MANILA, Philippines — Sulfur dioxide (SO2) emissions from Taal Volcano dipped on Monday, but remained relatively high as the volcano continued to spew plumes nearly a week after it was placed on heightened alert.

But the dip in SO2 emissions does not necessarily translate to a decrease in volcanic activity, said Mariton Bornas, chief of Phivolcs’ volcano monitoring and eruption prediction division.

“There are really lower measurements in the longer term trend of continued SO2 flux increase, just as there are extremely high measurements like last Sunday,” she told the Inquirer.

Bornas said prior to its eruption, there were no airborne SO2 gas in Taal, since these were absorbed by the lake and the volcano’s hydrothermal system.

Between Monday and Tuesday, Taal’s main crater spewed steam-rich plumes that reached as high as 3,000 meters before drifting toward south and east.

Residents in villages within the volcano’s 7-kilometer permanent danger zone in Batangas province have been evacuated after Taal’s phreatomagmatic eruption on July 1. Alert level 3 (high level of volcanic unrest) remains over Taal, meaning its activity may possibly lead to “hazardous eruption in weeks,” Phivolcs said.

It said entry into Taal Volcano Island must be prohibited, as well as into the high-risk villages of Agoncillo and Laurel towns in Batangas.

All activities in Taal Lake should also not be allowed during this time, Phivolcs said.