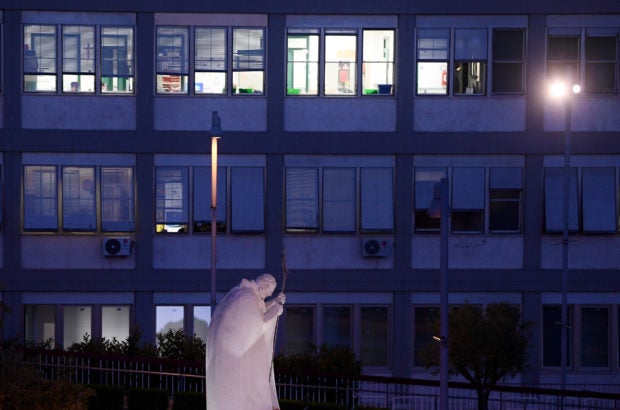 A view shows the Policlinico A. Gemelli Hospital in Rome on July 5, 2021, where Pope Francis arrived the day before to undergo a surgery. AFP

The reports said the 84-year-old pontiff did not require a colostomy following operation for an inflamed large colon on Sunday, and there was no evidence of a fever afterwards.

Vatican spokesman Matteo Bruni said on Monday the pope “is in good general condition, alert and breathing spontaneously” after the planned operation for what he described as symptomatic diverticular stenosis of the colon.

The three-hour procedure was conducted under general anesthetic and Francis underwent a left hemicolectomy, in which the descending colon — the part attached to the rectum — is removed, the Vatican said.

The remaining bit of the colon is then attached directly to the rectum.

Bruni said the pope would be in Rome’s Gemelli hospital for seven days “barring complications”.

The surgery was initially planned as a laparoscopy, also known as keyhole surgery, in which a thin tube is inserted into the body, several Italian newspapers said.

But they said the presence of a scar from previous abdominal surgery required a laparotomy, a type of open surgery. Health experts say it is not unusual to change method during an operation.

Francis is in the same suite on the 10th floor of the Gemelli hospital used by Pope John Paul II, who was there so often that he dubbed it “Vatican 3”, third in line after the tiny city state and the papal summer palace at Castel Gandolfo outside Rome.

The late pope underwent surgery there seven times, including after an attempt on his life in 1981, and for a tumor in the colon in 1992.

Pope Francis had been suffering pain from diverticulitis — an inflammation of pockets that form in the colon walls — for several months, but scheduled the surgery for the summer to allow time to convalesce, according to Corriere della Sera newspaper.

The pontiff had already put his Wednesday general audience on hold for the summer, and has no other official appointments in his calendar until Sunday, when he is due to lead the Angelus prayer.

If, as expected, he is still in hospital on Sunday, he could follow John Paul II’s example and lead the Angelus from his hospital window.