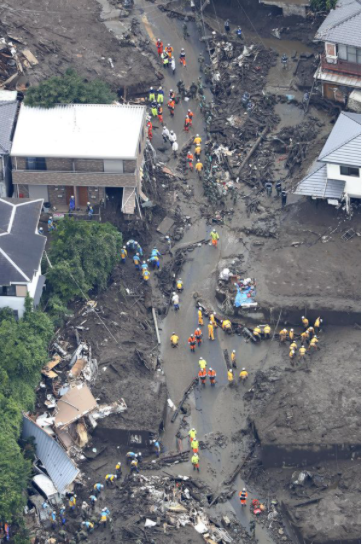 After the names of 64 missing people were released Monday evening, the city confirmed the whereabouts of 41 of them, while another person was added to the list of missing people. Eight men and 16 women are still missing.

About 1,700 rescuers, including police, firefighters and Self-Defense Forces personnel, are endeavoring to find the missing people in the area hit by the mudslide on Saturday morning in the city’s Izusan district. Seventy-two hours have passed since the disaster occurred, a point at which it becomes difficult to find survivors.

The names of 64 people who were missing as of Monday evening were released by the prefecture and the city on their respective websites and other media. The list was based on the resident registry. The city’s disaster control headquarters then received phone calls from some of the people or their relatives.

“The release of the list produced good results,” Atami Mayor Sakae Saito said during a press conference on Tuesday morning.

However, the daughter of a married couple whose names are on the list was newly confirmed as being missing. The daughter lived with her parents, but her name was not on the list because her residency was unregistered.

About 360 police, 770 firefighters, 410 SDF personnel and 180 Japan Coast Guard members resumed searching for the missing at 6 a.m. Tuesday, continuing to focus on the area near the Tokaido Shinkansen bullet train tracks, where there is a cluster of homes.

The rain finally stopped Tuesday morning. However, the Shizuoka Local Meteorological Office said the weather will be unstable from Wednesday to Sunday due to the effect of the seasonal rain front.

Small cracks have been observed near the mudslide’s starting point, raising concern that a second disaster could occur. The Land, Infrastructure, Transport and Tourism Ministry set up a surveillance camera at the collapsed area and began livestreaming on YouTube on Monday.

As of 7 a.m. Tuesday, 572 people have evacuated. Some homes in the area have no running water. The city is housing evacuees in two local hotels and one elementary school.