As pandemic grips PH, Filipinos reminded to prepare for another disaster—quakes 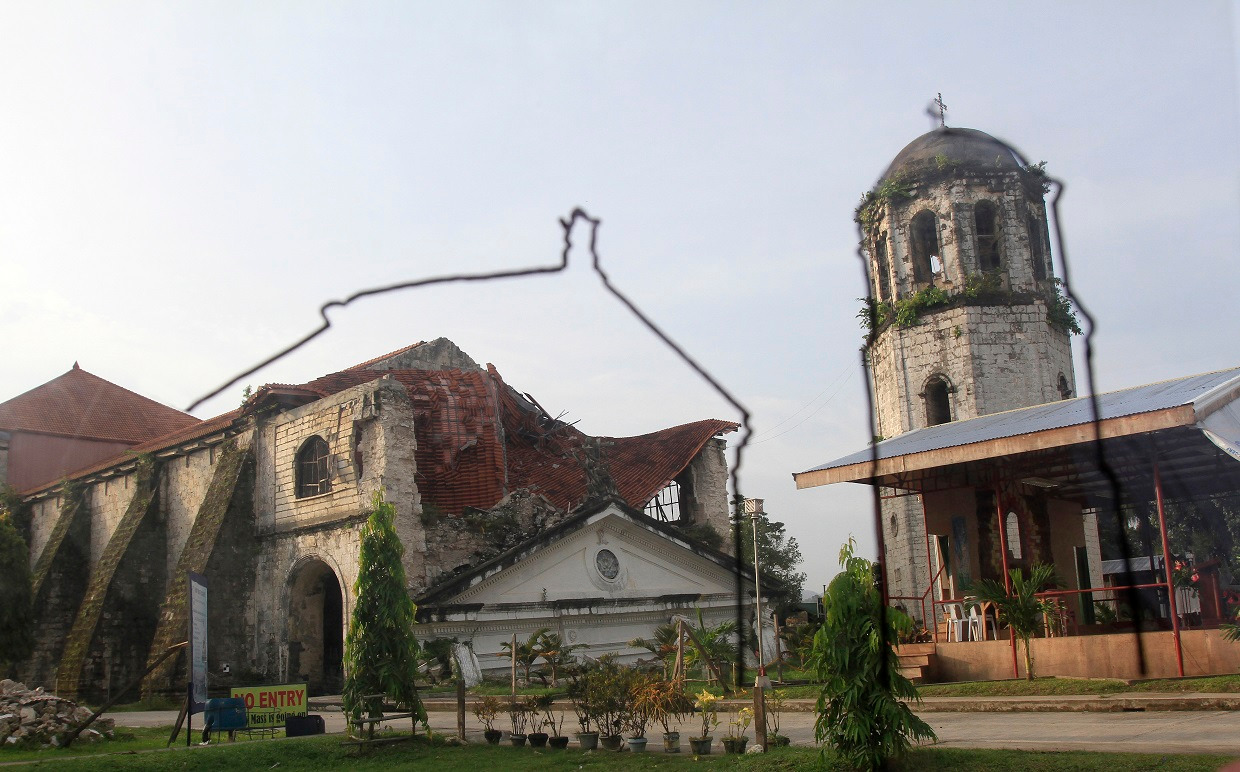 MANILA, Philippines — Almost two years since the COVID-19 pandemic struck, the still incurable disease remains to be the world’s top concern with so much energy devoted to finding a cure or preventing its spread.

But the collapse of a condominium building in Florida on June 24 served as a grim reminder that the pandemic was not the only calamity, man-made or natural, that people have to prepare for.

This is also the lesson that a proudly Filipino startup tech firm, Usher Technologies Inc., wants the people to remember—the best response to events that impact structural integrity, including quakes, is to prepare while anticipating and reducing damage.

“We cannot disregard the fact that even during this pandemic, the threat of a strong earthquake is always there, it’s still there, so it’s important for us to prepare,” said Dr. Francis Aldrine Uy, Mapua University dean and Usher Technologies president, in an online interview with INQUIRER.net last June 23.

“Even if there’s a pandemic, we still need to include this in our agenda,” he said. 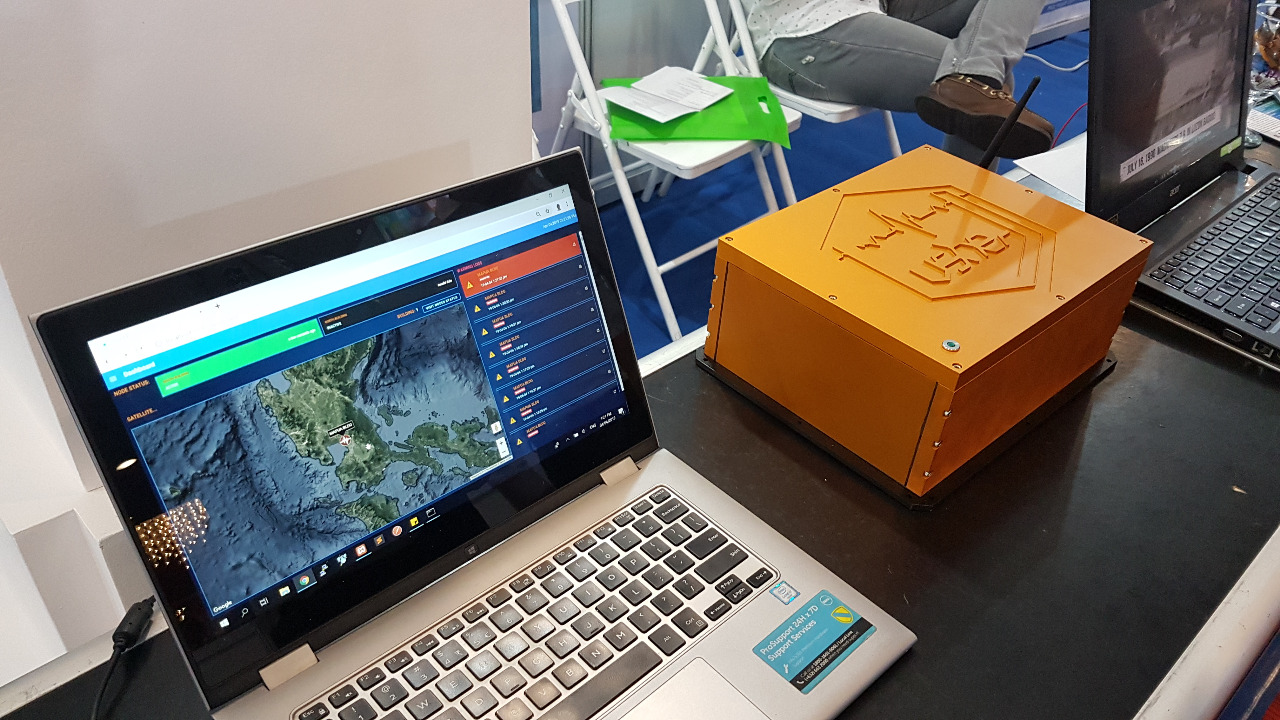 An USHER device (orange box) on display during a presentation. PHOTO FROM USHER TECHNOLOGIES

Since then, Usher Technologies provided establishments a state-of-the-art option for structural integrity monitoring, using a locally-made device that analyzes changes in the building before and after an earthquake.

Uy and the rest of the engineers behind the project are hoping that accidents, like the building collapse in Florida, could be avoided through gadgets and software like USHER.

Earthquakes are common in the Philippines due to its location in the Pacific ring of fire. One of the most destructive was the Magnitude 7.8 quake that flattened some areas in Luzon, including Baguio City and Dagupan City, in July 1990.

That quake, according to Uy, spurred his vision to develop USHER.

In terms of earthquakes, local authorities’ eyes are now fixed on West Valley Fault, a fault line that runs through Metro Manila and other provinces, which they believe is ripe for movement.

Uy uses a simpler approach: An earthquake within the country’s metropolis is not a question of if, but when.

“Our hope is that with this project, next time, we will be more prepared,” said Uy.

“Because you know, a strong earthquake, we always say in Usher, the Big One, is imminent,” he said.

“It’s not a matter of if, we’re not talking here about maybe or may happen,” he said partly in Filipino. “It’s just a matter of when.”

“Now the question is, are we ready?  Are we safe?  Or are we just going to be reactive?  Or better, we become proactive?” he said.

READ: Visualize ‘Big One’ by multiplying quake damage 25 years ago

Buzz about the so-called “Big One” earthquake has been going on as early as 2010, but recent figures from private and government think tanks show that the casualty count for a strong earthquake in densely-populated Metro Manila could range from 40,000 to 52,000, with around 500,000 injured. 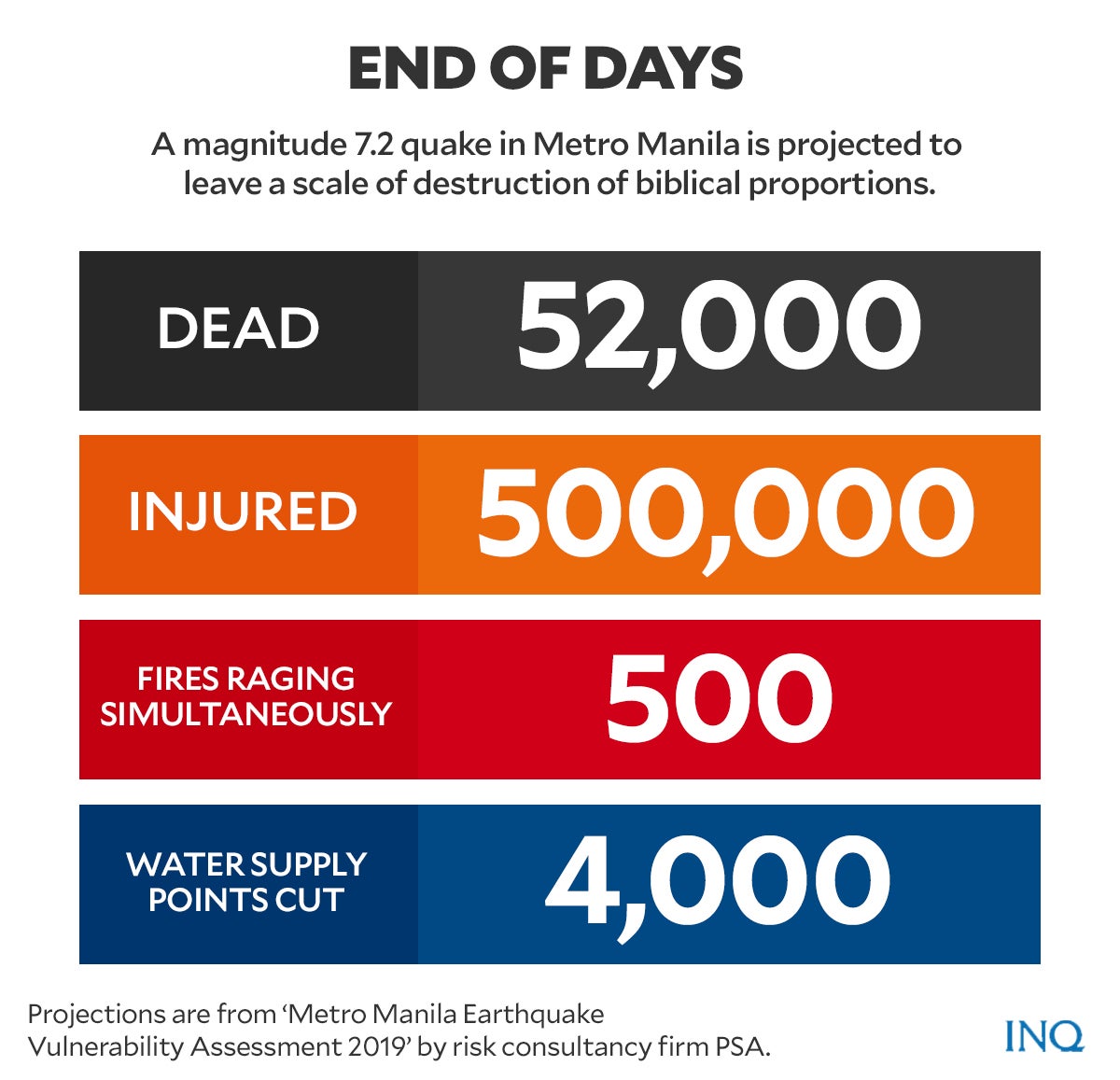 The solution, Uy explains, is right at the doorstep of building owners—a structural monitoring equipment, a device that the Department of Public Works and Highways (DPWH) requires for schools, hospitals, public buildings, commercial areas and other high-rises, in adherence with the National Structural Code.

Despite the DPWH order, however, Uy said in his presentation that the compliance rate is only around eight percent at a time when structural monitoring equipment should be a necessity.

But what does this device do? According to Uy, if USHER is tapped, its system analyzes a building’s structural makeup to obtain baseline data before external forces, like strong winds and quakes, batter it.

During and after an earthquake, the system also provides new data about the building, which are sent to a cloud server for comparison. From there, it can be determined if there’s a need to vacate the building or if it remains safe for occupancy.

Aside from avoiding possible loss of lives due to the collapse of structures that have not been analyzed, the economy can avoid losses brought by building administrators second-guessing structural integrity.

Uy said there are parameters and indicators that the USHER device would probe to determine whether the structure moved or suffered damage beyond what it can take.

“Most likely the structural design is perfect, they passed the codes, that’s for sure,” said Uy, partly in Filipino. “But take note, when you go to the stage of construction, there are a lot of variables there—workmanship, materials, construction methods, et cetera,” he said.

“And that’s what a system like USHER looks into, so you are able to characterize the building,” said Uy.

“During the earthquake, what it does is monitor if the parameters are exceeded,” he said, partly in Filipino. “Did the building movement exceed the designed level? Because if the movement was too big, most likely it would damage the building.”

“So what are called threshold, or limits, are being monitored,” he said.

He said businesses constrained by limited budget because of the pandemic should not worry because there are packages in the USHER system that are easier to acquire.

“But I think we’re the only one in the market that has this package for those building owners who have insufficient funding,” he said.

“It’s a bounce-back as one package, so that this provides them the Usher unit, and all that they need to do is pay on a monthly basis,” he added.

“We came up with new packages that would help our countrymen—due to the impact of the pandemic, of course we know everyone has insufficient funding, and they are focusing on how to handle the pandemic, but of course we’ve been trying to educate people that’s why we provide more and more free webinars for people,” he said.

Some of the programs related to Usher Technologies’ drive to raise awareness about structural integrity issues included an forthcoming Hackaton event that runs from July 15 to 17, and another online seminar on July 23.

As of now, several buildings, bridges and infrastructure projects have tapped Usher Technologies to provide them with the device and the monitoring system—from the Aurora-Katipunan Bridge to the Commission on Audit building.

During a program last June 23, Usher and the Philippine Structural Integrity Monitoring System (PhilSIMS), which Uy also leads, signed several agreements with different institutions that would adopt the USHER system.

But despite the successes, Uy admitted that some industry players still have hesitancy about USHER—just because of a tendency to patronize foreign products even if local ones are of equal, or superior, quality.

“You know Usher did not just came from anywhere, I’m not a businessman who went somewhere abroad and just looked for a product I want to sell in the Philippines,” Uy said.

“No, it came from a research study […] and this is a product of, shall I say, the best engineering school in the country, the Mapua University,” he said.

“So this did not come from just anywhere, it was studied,” Uy said in Filipino. “Our own technology is something we could really be proud (of),” he said.

“What is lacking really is for our fellow Filipinos to trust our own, which is always a challenge,” he said.

But aside from the awards that it obtained—like being one of the 45 winners out of 430 nominations in the World Summit Awards (WSA) under the category “Smart Settlements and Urbanization”—USHER has a selling point against foreign competitors:

Why buy from foreign suppliers whose maintenance services may cost a lot and take some time when you have a Filipino team ready to respond to urgent calls?

“Based on their experience really, they’re having difficulty in after-sales,” said Uy of foreign tech suppliers. “Because it’s easy at the start, everyone, I can say, all the similar products out there will have almost the same thing to offer at the start,” said Uy.

“The product is good, especially if it came from abroad, they would say it came from Japan, from the US, et cetera,” he said.

“But the problem really, after that, is the after-sales service,” said Uy.

“We have to understand that when you install this kind of device, it’s a long-term engagement,” he said.

“It’s not the end after installation—because the design life of a building or structure is at least 50 years,” Uy said.

“So imagine that, it requires long-term engagement and that’s something that we offer to our clients, that we are here, we are locally-based,” he added.

Uy said he hopes more Filipinos can come to terms about the fact that Filipino technology now excels in the world stage, too, just like in the case of USHER.  After all, the goal is to protect lives during earthquakes.

“We are Filipino-made, this is our own technology, so if there are problems we can work on it, we can do it on our own. No need to ask maybe a foreigner to come here just to check on your building,” he said.

“Our ultimate objective is that there will be more and more deployment of USHER, because if there would be more USHER deployed, then it’s a measure for structural resilience for us because we are able to monitor the structures,” he added.