US forces shoot down armed drone over Iraq embassy 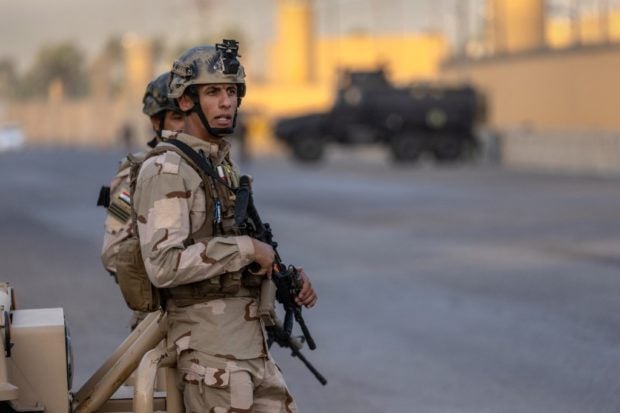 BAGHDAD, IRAQ – MAY 30: Iraqi Army soldiers stand guard on a road between the U.S. Embassy and the International Zone on May 30, 2021 in Baghdad, Iraq. (Photo by JOHN MOORE / GETTY IMAGES NORTH AMERICA / Getty Images via AFP)

BAGHDAD — US forces shot down an armed drone above their embassy in Baghdad on Monday night, Iraqi security officials said, hours after a rocket attack on a base housing US soldiers in the west of the country.

American defense systems fired rockets into the air in Baghdad, according to AFP reporters, with Iraqi security sources saying the salvos took out a drone that was laden with explosives.

Since the start of the year, 47 attacks have targeted US interests in the country, where 2,500 American troops are deployed as part of an international coalition to fight the jihadist Islamic State group.

Six of them involved these kinds of drones, a tactic that poses a headache for the coalition as the aircraft can evade air defenses.

In April, a drone packed with explosives hit the coalition’s Iraq headquarters in the military part of the airport in Arbil, the Iraqi Kurdish regional capital.

The next month, a drone packed with explosives hit the Ain Al-Asad airbase housing US troops.

On June 9, three explosives-laden drones targeted Baghdad airport, where US soldiers are also deployed. One was intercepted by the Iraqi army.

In a sign that the United States is concerned about new drone attacks, it recently offered up to $3 million for information on attacks targeting its interests in Iraq.

Separately on Monday, three rockets targeted an Iraqi air base in the western desert that also housed US troops, the international anti-jihadist coalition said.

The attack targeted the base at Ain al-Assad without causing any casualties.