In a narrow 3-2 vote, the Sandiganbayan’s First Division granted the senator’s motion to dismiss the 16 counts of graft against him — the remaining charges implicating him in the scandal exposed in 2013.
By: Krixia Subingsubing - Reporter / @KrixiasINQ
Philippine Daily Inquirer / 05:13 AM July 06, 2021 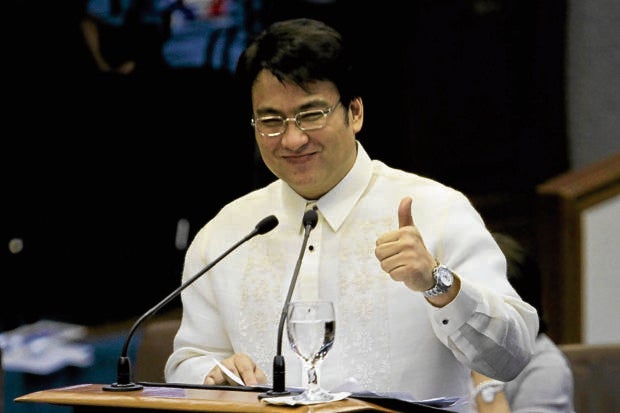 MANILA, Philippines — The Sandiganbayan’s Special First Division, in a narrow 3-2 vote, has acquitted Sen. Ramon “Bong” Revilla Jr. of 16 counts of graft over his alleged involvement in the multibillion-peso pork barrel scam that was exposed in 2013.

The decision clears Revilla of all his remaining criminal cases in connection with the scam. Two years ago, the antigraft court already acquitted Revilla of plunder even as it ordered the senator to return P124 million in public funds, which he has yet to comply with. The 2018 decision was written by Justice Geraldine Econg, who also wrote the decision clearing the senator of the graft charges.

The court granted Revilla’s demurrer to evidence — or motion to dismiss the charges against him, claiming insufficient proof — but denied the demurrer of the scam’s alleged mastermind, Janet Lim Napoles.

That resolution cited as a basis Revilla’s demurrer as well as the separate demurrers by those accused.

Revilla’s latest acquittal comes nearly eight years since the Philippine Daily Inquirer ran a six-part exposé on the scam to funnel P10 billion in the Priority Development Assistance Fund (PDAF) — or pork barrel — of lawmakers to ghost projects in exchange for massive kickbacks for the legislators concerned.

The prosecution sought to establish Revilla’s guilt through, among others, the endorsement letters, memorandums of agreement, and project proposals signed by him or his then-chief of staff, Richard Cambe.

The antigraft court, however, concluded that Revilla’s requests to endorse and allocate his PDAF to nongovernmental organizations (NGOs) owned and controlled by Napoles did not constitute manifest partiality or bad faith.

These requests, the court said, were made before the Supreme Court eventually struck down the PDAF as unconstitutional and were thus considered “valid releases of the government.”

“So when accused Revilla requested for the release of his PDAF allocation and separately endorsed the NGOs, he was performing acts that were customary at the time,” the court said.It also deemed Revilla’s endorsement letters as merely recommendatory, which therefore could not be “interpreted as an order to do away with public bidding.”

The court further took note of such phrases in those letters as “for appropriate action,” “as allowed by law,” and “subject to government account and auditing rules and regulations.”

“It does not command nor compel the implementing agencies to whom these are addressed to award the project to [a] recommended NGO,” the court said.

It added that “Revilla’s endorsement could not be considered to have given unwarranted benefit to the NGOs concerned as it was not within his power to grant or award the project to them.”

The court also noted that apart from Benhur Luy, Napoles’ cousin who became the whistleblower in this scandal, “no other witness or coaccused pointed to conclusive proof that Revilla received money from Napoles or her representatives.”

Luy had testified that he had never personally delivered money to Revilla and that he had never seen the senator receive money from Napoles. Still, he claimed that Revilla made deposits to his bank accounts totaling P20.6 million.

Nevertheless, the ruling concluded that “the glaring absence of evidence proving that accused Revilla directly received the proceeds from the PDAF projects or any money from accused Napoles that motivated him to give her and her NGOs unwarranted advantage to the detriment of the government cannot be ignored by the court.”

“The continued lack of evidence that would prove beyond reasonable doubt Revilla’s involvement… leads to a conclusion not different from that reached in the plunder case,” the ruling said further, as it referred to Revilla’s plunder acquittal in 2018.

Relampagos, Nuñez, Paule, Bare, Jalandoni, and Munsod were accused of approving “with undue haste” the release of Revilla’s discretionary funds to the ghost projects without conducting due diligence.

According to Luy, they also received kickbacks, with Napoles allegedly paying for Relampagos’ birthday party and giving him and his staff lavish gifts and plane tickets to Hong Kong. However, the court ruled that Luy’s bare allegations “do not sufficiently establish… that the accused received kickbacks representing portions of the PDAF.”

Moreover, it was not proven whether these gifts were given at the same time as the release of the special allotment release orders for the PDAF, the court said.

As for Munsod, whose alleged involvement in the scam was premised on her signatures on at least three disbursement vouchers, the court said the prosecution failed to prove that she acted with manifest partiality, evident bad faith or gross inexcusable negligence, or that she conspired with the rest.

Regarding the 23 checks that Jalandoni issued to Napoles’ NGOs, as claimed by the prosecution, the court said that “other than these checks, there is a dearth of evidence that would link her to the grand design of siphoning money from the government coffers.”

It also supported Jalandoni’s argument that she only issued the checks because they already had complete supporting documents.

The court, however, said it was “clear” that Cambe received kickbacks from the scam.

Revilla’s former chief of staff, who was convicted of plunder in the Sandiganbayan’s 2018 ruling, died of a stroke on April 8 while serving his sentence at the New Bilibid Prison.