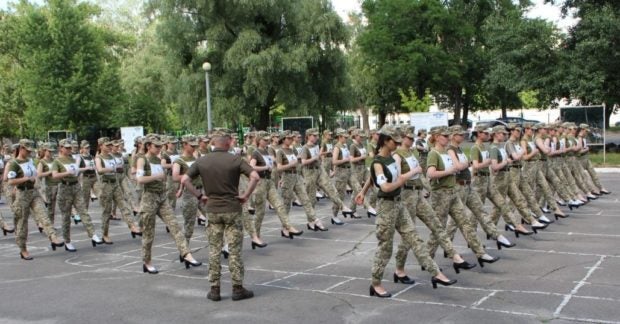 The Ukranian military faced criticism for making its female cadets march while wearing high-heeled shoes as part of a parade for the country’s Independence Day.

The army received backlash after students at the Taras Shevchenko Military Institute were seen practicing their march in heels, as shown on the Ukraninan defense ministry’s Facebook page on Thursday, July 1. The military stated that the marching exercise was part of a parade to be held on Aug. 24, as per Ukrainian news outlet Kyiv Post last Friday, July 2.

Exercises involving the said cadets happened twice a day with a total of four hours daily, and the women were expected to wear their parade uniforms which included heeled shoes rather than their usual exercise boots. The women also reportedly had to practice a “new standard marching style” where their feet only lifted between 10 to 15 centimeters off the ground instead of the regular 15 to 20 centimeters.

The military was accused of forcing the women into wearing the said footwear during the march. Meanwhile, civic group Ukrainian Woman Veteran Movement stated through its Facebook page on Friday, July 2, that the military’s actions were “deliberately harmful to [the cadets’] health.”

“We, veterans, chose the right to be able to serve at the level with men worthy of serving in the Armed Forces of Ukraine and we proved our capacity not on heels, but with weapons in our hands,” it added.

Lawmaker Maryna Bardyna said on the same day that she has spoken with the defense minister Andriy Taran. The minister allegedly told her “there will be different shoes during the parade” but, as of this writing, the defense ministry has not yet confirmed any changes in the personnel’s attire. Dana Cruz/JB

Mother arrested for pretending to be her teenaged daughter in school