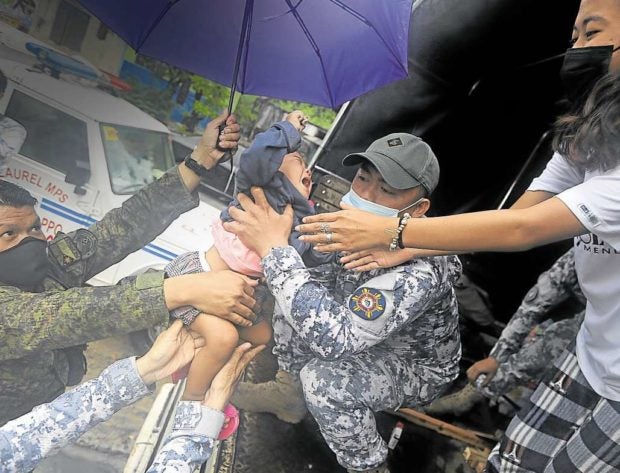 BROUGHT TO SAFETY A child is carried on board a vehicle waiting to transport residents out of Barangay Buso-Buso in the town of Laurel, Batangas province, on Saturday, as members of the Philippine National Police, the Coast Guard and the Air Force help in evacuation efforts. Taal Volcano remained on alert level 3 following its phreatomagmatic eruption on Thursday. —NIÑO JESUS ORBETA

More people were evacuated on Saturday from several towns near the restive Taal Volcano, as high sulfur dioxide (SO2) emissions and potential COVID-19 transmissions remained a concern for health and emergency response officials.

From around a thousand the previous day, the National Disaster Risk Reduction and Management Council (NDRRMC) said 3,141 people, or around 788 families, from the “high-risk” towns of Agoncillo, Laurel, San Nicolas and Lemery in Batangas province had sought shelter.

The NDRRMC said 16 evacuation centers had been set up in the province, with the Department of Social Welfare and Development delivering some 8,000 food packs for the fleeing villagers.

To ensure compliance with health measures and prevent coronavirus infections in the shelters, the Philippine National Police said it had deployed COVID-19 protocol officers to the sites.

The PNP has also set up checkpoints in Batangas to prevent affected residents from returning to high-risk areas, PNP chief Guillermo Eleazar said, adding that the police have anticipated this possibility after their experience during Taal Volcano’s eruption in January last year.

Meanwhile, a low pressure area (LPA) was spotted 990 kilometers east of Northern Mindanao on Saturday afternoon and was expected to move northwest in the next 24 hours toward extreme northern Luzon, according to the state weather bureau.

The LPA will not affect Taal Volcano’s current activity but may affect the wind pattern over the volcano, said Science Undersecretary Renato Solidum Jr., who also heads the Philippine Institute of Volcanology and Seismology (Phivolcs).

“The wind may shift a little bit, but as you know the wind would disperse the SO2 gas and if it rains, it would just bring it down,” he added.

Solidum also noted that the SO2 was “still high.” Phivolcs’ bulletin on Saturday said “SO2 emission averaged 10,254 tonnes [a] day.”

Lito Castro, head of the Batangas Provincial Disaster Risk Reduction and Management Council, said the evacuation centers have their respective triages manned by health-care workers and policemen to prevent the spread of COVID-19 among the evacuees.

The Department of Health (DOH) in Calabarzon (Cavite, Laguna, Batangas, Rizal and Quezon) has placed all health facilities in the province on “code white alert” for them to be ready to provide emergency services.

Director Paula Paz Sydiongco, officer in charge of DOH Calabarzon, said a provincial health team had been mobilized to assist residents in case of injuries resulting from the volcanic eruption.

Alert level 3, according to the Phivolcs website, indicates “high level of volcanic unrest,” with magma near or at the volcano’s surface and volcanic activity possibly leading to “hazardous eruption.”

“Essentially what we have observed would be [that] we now record more earthquake events,” Solidum said.

A total of 48 volcanic earthquakes were recorded in the past 24 hours, Phivolcs said in its bulletin.