Restive Taal: 1K in shelters as quakes, SO2 emissions persist 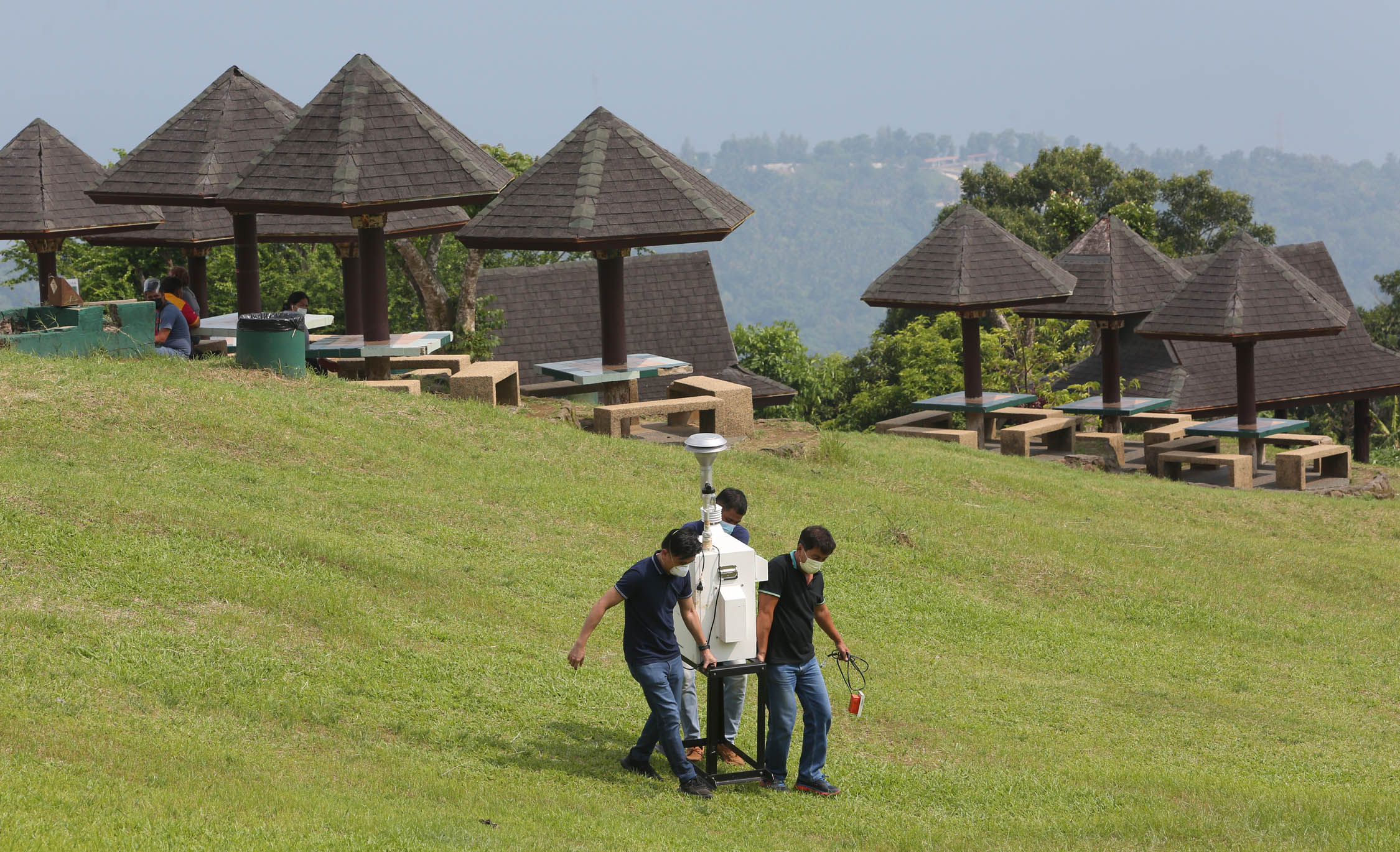 RISK ASSESSMENT An air sampling device is moved into position at the scenic Tagaytay Picnic Grove on Friday to monitor the amount of dust particles in the air near Taal Volcano following its sudden eruption on Thursday afternoon. Earlier this week, the Philippine Institute of Volcanology and Seismology said the volcano’s main crater produced sulfur dioxide emissions reaching Metro Manila and nearby provinces, prompting health warnings. —MARIANNE BERMUDEZ

Taal Volcano continued to show signs of magmatic unrest on Friday morning, with state volcanologists warning people to steer clear of the danger zone in case of a strong eruption.

“At Alert Level 3, magma extruding from the main crater could drive [an] explosive eruption,” the Philippine Institute of Volcanology and Seismology (Phivolcs) said.

The agency reminded the public that Taal Volcano Island and high-risk villages in Agoncillo and Laurel towns in Batangas should remain off-limits due to possible hazards, including hot ash flows and volcanic tsunami.

In its Friday advisory, Phivolcs told villagers around Taal Lake to stay vigilant, take precautions against volcanic smog caused by high levels of sulfur dioxide emission, and prepare to leave their homes for safer ground should the volcano’s activity intensify.

Around 460,000 people live within the 14-kilometer-radius danger zone, according to official estimates.

At least 13 barangays in Batangas have been affected so far by the volcano’s restiveness since Thursday, while over 1,000 people have evacuated, the National Disaster Risk Reduction and Management Council said. Phivolcs also advised pilots to avoid flying over Taal Volcano Island “as airborne ash and ballistic fragments from sudden explosions and pyroclastic density currents, such as base surges may pose hazards to aircraft.”

Earlier this week, Phivolcs said sulfur dioxide emissions from the crater had reached Metro Manila and nearby provinces, explaining the haze observed in these areas over the past few days.

On Friday, four more short phreatomagmatic bursts—or an eruption due to contact between hot magma and water—were recorded above the main crater lake.

“High levels of volcanic sulfur dioxide, or SO2, gas emissions and steam-rich plumes that rose as much as 3,000 meters high and drifted southwest and southeast have been observed from the Taal main crater,” Phivolcs said in its 8 a.m. bulletin.

Footage of the main crater lake also showed continuous upwelling around 10 a.m., an activity producing plumes up to 3-km high.

Phivolcs also recorded 29 volcanic earthquakes, including one explosion-type earthquake, and 22 low-frequency volcanic earthquakes were recorded over a 24-hour period. Two volcanic tremors that were 3 minutes long and low-level background tremor that has been recurring since April 8 were also detected.

Phivolcs Director Renato Solidum, however, said Taal was not expected to erupt with an intensity reached in January last year, when a phreatic explosion displaced thousands in the nearby provinces of Batangas, Cavite and Laguna and spewed dark brown ash reaching as far as Metro Manila and Central Luzon.

The Department of Health warned against the dangers of inhaling sulfur dioxide from the volcano, advising residents around Taal to keep their windows and doors shut or wear an N95 mask when going out. Vaccination at shelters

“Many of you may be having a hard time breathing, have heaviness in the chest or a persistent cough and itchy throat and nose. These are the effects of the particles from sulfur dioxide emissions,” said Health Undersecretary Maria Rosario Vergeire, adding that those suffering from asthma, bronchitis, or emphysema would be particularly vulnerable.

The provincial government of Batangas said it was prepared to administer COVID-19 vaccines to residents who need to be evacuated to prevent coronavirus transmission in the shelters.

“The national government will augment our COVID-19 vaccines for the vaccination … at the evacuation centers,” Lito Castro, head of the Provincial Disaster Risk Reduction and Management Council, said in a phone interview.

As of Friday morning, Castro said 345 families composed of 1,392 individuals have been placed in temporary shelters in the towns of Laurel, Agoncillo, Balayan, Nasugbu, Calatagan, Calaca, Balete and Tanauan City, all of which are within the 14-km-radius danger zone.

“An evacuee who shows symptoms will be isolated. Those who will test positive (for COVID-19) will be immediately sent to medical facilities for confinement and treatment,” Castro said. —Nikka G. Valenzuela, Patricia Denise M. Chiu and Delfin T. Mallari Jr. INQ