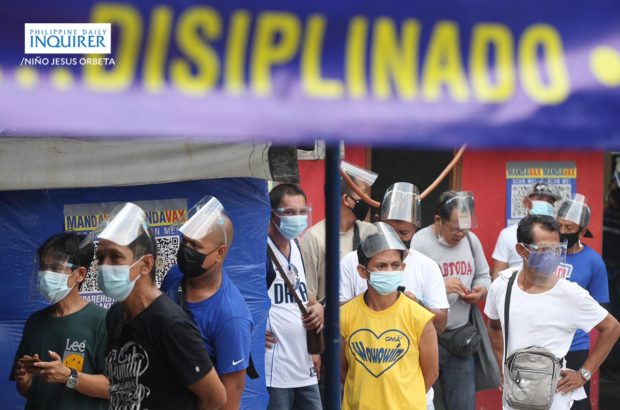 Corporate Philippines sees the proverbial light at the end of the tunnel with the rollout of COVID-19 vaccines for economic front-liners, a key to the further reopening of the economy after more than a year of tough quarantine measures.

The pace of vaccination has improved as the private sector began its own inoculations with shots they had purchased.

On Friday, the Manuel V. Pangilinan group of companies became the latest Philippine conglomerate to roll out its own inoculation program.

Up to 11 million people have been inoculated since the national vaccination program was launched in March, with 1 million jabs administered in just four days, from Monday to Thursday this week, according to Secretary Vince Dizon, deputy chief implementer of the National Task Force Against COVID-19.

The local stock barometer returned to the 7,000 levels last seen in February, before a surge in cases prompted the government to again tighten health protocols.

With the recent decline in infections and the deployment of more vaccines, the government relaxed some of the restrictions.

Ramon Monzon, president of the Philippine Stock Exchange (PSE), said the government’s vaccination program “is indispensable in the country’s efforts to reverse the social disruptions and economic devastation caused by the pandemic.”

“The inclusion of private sector employees or economic front-liners among the priority groups for inoculation is a major step in the reopening of the economy,” Monzon said during the recent inoculation of PSE employees and the building administration, security and maintenance personnel in Taguig City.

“Seeing the bottom, investors have returned and most analysts have upgraded their projections for PSEi (Philippine Stock Exchange index) in 2021. Reported new orders for vaccines have raised hopes that the rollout of vaccines will accelerate in second half,” First Metro Investment Corp. and University of Asia and the Pacific said in their research note issued in June.

The Pangilinan group launched its inoculation program at the Meralco compound in Pasig City on Friday with 600 employees receiving their first shot of the Moderna vaccine. It said more sites would be opened to inoculate all its 60,000 employees.

SMC is spending P1 billion to vaccinate its 70,000 employees, extended workforce and their families.

“Vaccinating them is critical for our country to achieve herd immunity and recover from this crisis,” SMC president Ramon S. Ang said.

Tycoon Enrique Razon-led ICTSI kicked off its vaccination program on June 28, less than a day after the first batch of Moderna vaccines arrived in the Philippines.

On June 14, over 2,000 employees of the Ayala Group began receiving their jabs at UP-Ayala Land TechnoHub in partnership with the Quezon City government.

A new vaccination site, one of 24 around the country, was opened this week at Ayala Malls Solenad in partnership with the Sta. Rosa City government, Ayala Corp. chair Jaime Augusto Zobel de Ayala said.

AC Health president Paolo Borromeo said its goal is to administer 1 million doses in 2021 for the Ayala Group and its partners.

Jollibee founder and chair Tony Tan Caktiong told shareholders in an annual meeting that close to 90 percent of the group’s employees had agreed to be vaccinated.

“With vaccination rate increasing, we are encouraged that Philippine economic recovery is under way in 2021 and will be stronger in 2022,” he said.

Century Pacific Food Inc. executive chair Christopher Po told the company’s stockholders recently that it had contracted 70,000 doses to be given free to all its employees following guidelines set by the Department of Health (DOH).

The Federation of Filipino Chinese Chambers of Commerce and Industry Inc. (FFCCCII) launched a vaccination program on June 25, about a week after the arrival of 500,000 doses of the Sinovac vaccine it had procured.

“The Filipino Chinese business community has undertaken this vaccination project in the spirit of volunteerism and out of civic duty to help the country overcome this global crisis,” FFCCII president Henry Lim Bon Liong said.

The government is aiming for 500,000 vaccinations per day to reach its target of inoculating 50 million to 70 million Filipinos by the end of this year.