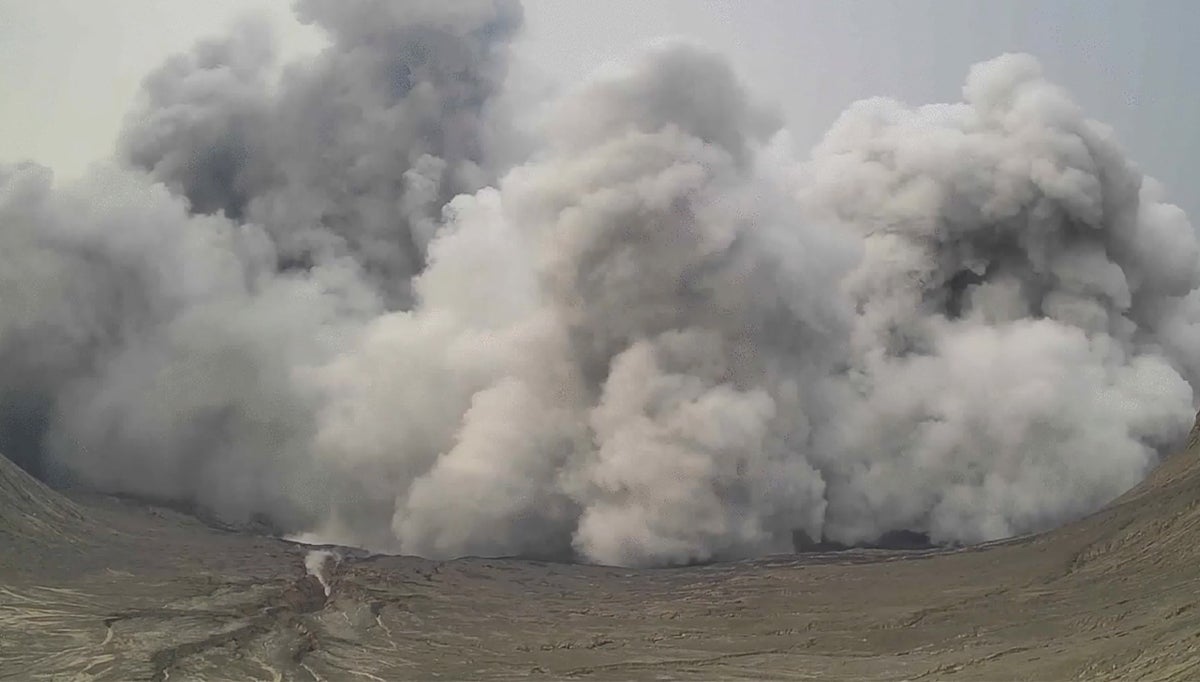 MANILA, Philippines — From plumes to lava flow, the Philippines, through the years, witnessed separate episodes of volcanic unrest with Taal Volcano’s “phreatomagmatic eruption” being the latest.

The Philippine Institute of Volcanology and Seismology (Phivolcs) raised Alert Level 3 on Taal, which meant “magma extruding from the main crater could drive an explosive eruption.”

Four short phreatomagmatic bursts that lasted not longer than two minutes each were also recorded following the 3:16 p.m. explosion.

Phivolcs said that the Philippines sits on a “unique tectonic setting” ideal to volcanic activities as it is located on the boundaries of two tectonic plates—the Philippine Sea Plate and the Eurasian Plate—that dive beneath “the archipelago along the deep trenches along its east and west seaboard.”

The Philippines has 24 active volcanoes, including Taal, Pinatubo, Mayon, Bulusan, and Kanlaon – all placed by state volcanologists on “heightened alert”.

As of Friday (July 2), the volcanoes, except for Taal, are still on Alert Level 1, which means that “no eruption is imminent”.

In Mt. Pinatubo, a volcano located in the provinces of Pampanga, Tarlac, and Zambales, Phivolcs reported five volcanic earthquakes. It added that the volcano emitted 262 tons of carbon dioxide and as of April, its crater lake has 7.95 acidity and 53°C temperature.

While state volcanologists did not detect any volcanic earthquakes in Albay’s Mayon Volcano, 862 tons of sulfur dioxide (SO2) were emitted as of June 28 and there is still ground deformation because of the continued inflation of its edifice.

In Sorsogon, volcanic earthquakes were not detected by Phivolcs while monitoring Mt. Bulusan. But while the volcano did not release SO2 based on observation last June 1, there is still ground deformation because of continued inflation.

Kanlaon Volcano, located in the provinces of Negros Oriental and Negros Occidental, had 11 volcanic earthquakes. The volcano’s ground is deforming because of the inflation of edifice. Last July 1, it emitted 835 tons of sulfuric gas. 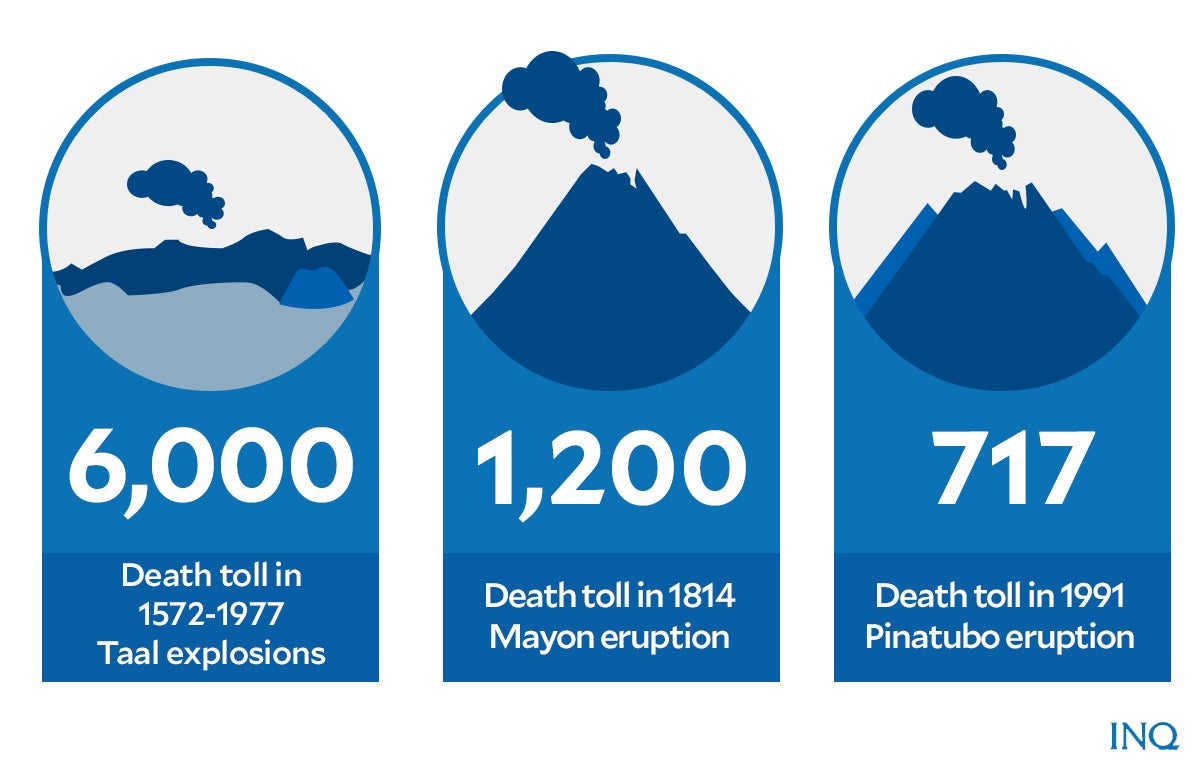 While Taal’s volcanic activity on Thursday was considered as one of the most recent, the country witnessed deadly eruptions in the past, including Taal Volcano’s “magmatic eruption” on Jan. 12, 2020 that withered leaves because of the lava, ash, and gases it emitted into the air.

The National Economic and Development Authority (Neda) said that the income lost from the 2020 eruption could hit P4.314 billion – with agriculture and fishery having the most unrealized income of P3.167 billion.

In 1754, Taal Volcano had its biggest explosion that lasted for almost 7 months, burying four towns in Batangas in water, ash, and rocks. According to Phivolcs, the volcano erupted 33 times between 1572 and 1977. So far, the volcano has claimed at least 6,000 lives.

Mayon Volcano, on February 1, 1814, had its deadliest eruption, killing at least 1,200 people. It destroyed several villages in Albay and Camarines Sur provinces with hot stones, sand, and ashes that were spewed from its crater.

Considered as one of the biggest in the 20th century, Mt. Pinatubo’s eruption on June 15, 1991 produced high-speed flow of hot ash and gas, mudflows, and clouds of volcanic ash. It emitted a column of ash 40 kilometers above its crater.

As described by the United States Geological Survey (USGS), “the eruption of Mt. Pinatubo sent lahar and pyroclastic flows down the mountain, wiping out bridges and other infrastructure downstream.” Data from Phivolcs said that the eruption displaced 1.25 million people and claimed 717 lives.

“Most of the deaths and injuries from the eruption were from the collapse of roofs under wet heavy ash,” USGS said.

“Many of these roof failures would not have occurred if there had been no typhoon. Rain continued to create hazards over the next several years, as the volcanic deposits were remobilized into secondary mudflows,” it said.

“Damage to bridges, irrigation-canal systems, roads, cropland and urban areas occurred in the wake of each significant rainfall. Many more people were affected for much longer by rain-induced lahar than by the eruption itself,” USGS said.

USGS said that Mt. Pinatubo’s eruption caused widespread destruction, including on the economy: “The eruption cost $700 million in damage, $100 million of which was damage to 16 aircraft flying at the time of the eruption and $250 million in property with the rest a combination of agriculture, forestry and land.”

For USGS, forecasting Mt. Pinatubo’s “climactic eruption” resulted in at least 5,000 lives and at least $250 million in property saved.

The agency said before the eruption, on July 16, 1990, a magnitude 7.8 earthquake hit about 100 kilometers northeast of Mount Pinatubo on the island of Luzon, “shaking and squeezing the Earth’s crust beneath the volcano.

“Thousands of small earthquakes occurred beneath Pinatubo through April, May, and early June, and many thousand tons of noxious sulfur dioxide gas were also emitted by the volcano,” it said.

Phivolcs said that to prepare the country for disasters like volcanic eruptions, it was “closely monitoring” volcanoes and immediately informs the public and local government units on its findings.

“Phivolcs monitoring of active volcanoes in the Philippines continues and is regular,” the agency said. “Five volcanoes are on heightened alert based on their respective activities,” it said.

“Every time there are changes, we immediately release updates to the public to inform everyone,” Phivolcs said.

It said it releases information for action by local government units which decide how to respond. “The primary goal of Phivolcs is to disseminate all necessary information to cope with these situations” the agency added.

Phivolcs is enforcing permanent danger zones based on the alert level raised on a certain volcano. It also produced hazard maps showing lists of communities prone to the dangers posed by volcanic eruptions like base surge, tsunami, lava flow, and lahar flow.