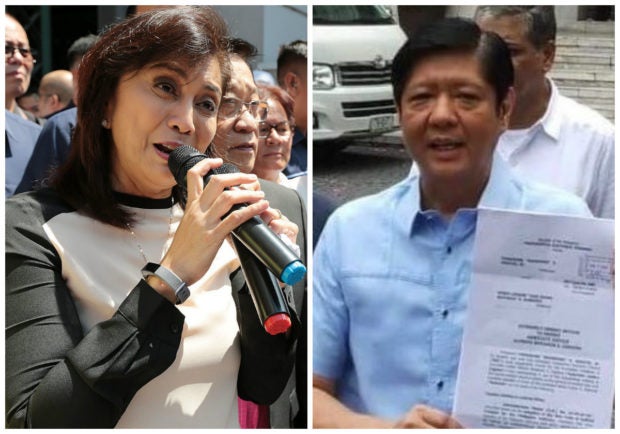 In a 52-page comment, Robredo, through election lawyer Romulo Macalintal on Friday said Marcos’ motion for reconsideration that seeks to overturn the PET decision lacks merit because the arguments presented by the Marcos camp were already discussed in the decision.

In February 2021, the Supreme Court (SC), sitting as the PET, dismissed the former senator’s poll protest which claimed that he was cheated during the 2016 vice presidential race in which Robredo won.

“[…] Robredo, in her comment on the motion for reconsideration (MR) of Mr. Ferdinand Marcos, Jr., of the resolution of the [PET] dismissing his election protest said that the MR must be denied for its utter lack of merit.  The allegations are mere rehash or repetition of the same arguments already settled or decided by the PET in its said resolution,” Macalintal said.

“Marcos should know that the prospect of defeat is a reality that all political candidates who stand for election must learn to accept,” he added.

Marcos lost by a slim margin of over 260,000 votes to Robredo, prompting the son of late dictator and former president Ferdinand Marcos to conclude that cheating happened. This led to the filing of a poll protest before the PET.

However, PET unanimously dismissed Marcos’ poll protest for lack of merit, and for ultimately failing to prove that electoral fraud occurred.

Less than a month after the dismissal, Marcos filed his motion for reconsideration even if a unanimous decision was already made.

Macalintal also emphasized that it was clear that Marcos “committed a legal blunder” when he chose the wrong areas as “pilot provinces” for the recount.

When news of the protest’s dismissal came out, Marcos’ lawyer Vic Rodriguez claimed that only the second cause of action in their protest was dismissed by the PET, and that their third cause of action still stands.

While SC has since clarified that the whole protest was dismissed, the second cause of action stems from the second part of the protest wherein Marcos was allowed to handpick three provinces where recounts would be done — and which will be used as basis to prove that Marcos really lost votes during the elections.

In that part, Marcos’ camp picked the provinces Camarines Sur, Iloilo, and Negros Oriental — all known bailiwicks of Robredo’s Liberal Party  As a result, manual recount in these provinces showed that Robredo’s lead over Marcos even increased.

“What is clear in Marcos MR is the reality that he committed a legal blunder when he chose his pilot provinces.  This was his own personal choice.  Nobody dictated upon him on his choice.  He could have opted for one or two pilot provinces for straight revision and recount and one (1) pilot province for annulment of the results, or vice versa,” Macalintal explained.

“But he did not.  Instead he chose three (3) pilot provinces and opted for straight revision and recount.  And now that he found out that he made a blunder in choosing his pilot provinces, he now wants to change the rules of the game by asking the PET to give him additional three (3) provinces for annulment of the results,” he added.

Macalintal was referring to three other provinces that Marcos pointed to in his third cause of action — votes from provinces in Mindanao which the former senator was seeking to annul.

“If this is allowed, then he would be the first protestant before the PET who is allowed to have a total of six (6) pilot provinces which is contrary to the provision of Rule 65 of the PET which limits the pilot provinces to only three (3) provinces,” the lawyer noted.

Robredo and her lawyers have stated several times that the right move for Marcos now is to stop insisting that he won the elections, to cast away any doubts over the legitimacy of the elections.

On one occasion, Robredo lambasted Marcos for supposedly, willingly desecrating institutions like the sanctity of the voting process just to push his personal ambition.  She also gave a piece of advice to her opponent: that he should instead prepare for the upcoming elections in 2022.