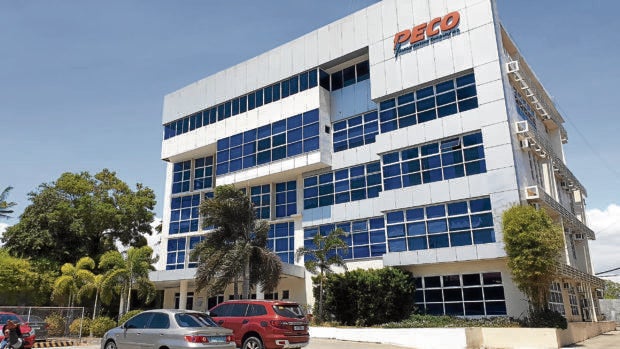 BLUE BUILDING The headquarters of the Panay Electric Co. in Iloilo City. The company’s distribution system has since been taken over by More Electric and Power Corp. —CONTRIBUTED PHOTO (file)

Mayor Jerry Treñas said the city government “will be compelled” to file a complaint of syndicated estafa against all Peco executive officers and members of the board if the company refuses to remit the taxes and penalties.

“The city is compelled to protect its interest especially during a pandemic like this COVID-19,” he said in a statement.

The city legal office on June 16 sent a demand letter to Peco to remit P51,425,406.37 in franchise taxes, excluding interests and other charges for the second to the fourth quarter of 2019.

“The said collected 2019 franchise tax payments are still in your control and possession without any legal authority for you to do so and failure to pay/remit the same to (the city government) constitutes the crime of syndicated estafa,” city legal officer Edgardo Gil said in the letter.

In a petition for declaratory relief before the Iloilo City Regional Trial Court (RTC), Peco also pointed out that the city government revoked its business permit on May 8, 2020, because its legislative franchise was not renewed.

“It appears therefore that respondent City of Iloilo is imposing a franchise tax against Peco while at the same time contending that Peco is not entitled to a business permit because it has no franchise,” according to its petition.

More Power took over the distribution assets of Peco in February 2020 after the Iloilo City RTC issued a writ of possession.

Peco also filed a supplemental motion for the issuance of a writ of preliminary injunction to stop the auction of properties levied by the city treasurer for the alleged non-payment of franchise taxes.

In a four-page order dated May 12, 2021, the Iloilo City RTC Branch 31 issued a preliminary injunction on the auction of Peco’s properties, which has a market value of P48,488,800.

In his order, Judge Cyril Regalado said the preliminary injunction was issued “without meaning to prejudge the main case.”

The court also required Peco to post a P1-million bond for damages the city government may suffer as a result of the injunction. The company posted the bond after the order was issued.

In an omnibus motion dated June 16, the city legal office sought the dissolution of the writ of preliminary injunction and the dismissal of Peco’s petition for declaratory relief.

It argued, among others, that Peco failed to present any evidence that it owns and is entitled to the “franchise taxes it already collected from its consumers, portions of which, (it) already even paid to the City Government.”

“Contrary to Peco’s claim, it is in fact (the Iloilo City government which) will suffer grave and irreparable injury due to deprivation of much-needed resources, especially to address the present pandemic,” according to the omnibus motion.