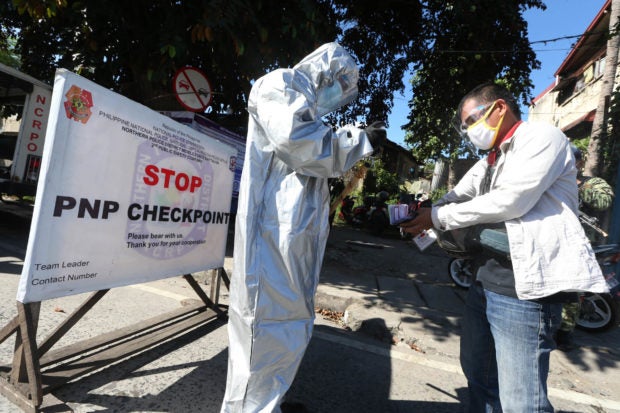 While the country is not yet back to pre-surge levels, the Department of Health (DOH) on Thursday said the Philippines could now be classified as “low-risk” for COVID-19, after the national case growth rate slowed down and the daily infection rate declined.

A group of pandemic monitors, however, did not fully agree with that assessment.

“We have a negative two-week growth rate, and our Adar nationwide is at 5.42,” said Dr. Alethea de Guzman, the acting director of the DOH Epidemiology Bureau, during an online media briefing.

Adar is short for average daily attack rate. Health authorities measure COVID-19 risk by determining the Adar, or the number of people found infected with the coronavirus per 100,000 population, over a two-week period.

Another gauge is the proportion of hospital beds, particularly those in their intensive care units (ICUs), which are occupied in relation to the total available for a town, city, province or region.

The OCTA Research, however, said an area defined as low risk should have an Adar of less than one.

The independent research group is composed of academics who have been observing the pandemic since it broke out last year.

“We consider Adar below 1 to be low risk, Adar from 1 to 10 to be moderate risk,” OCTA research fellow Guido David told the Inquirer.

For OCTA, only an Adar of less than 1 per 100,000 population, per day, could be considered low risk and that “is what other countries use,” according to David.

He said his group generally looks at the risk level “from a regional perspective rather than a national perspective” since there will naturally be varying degrees of exposure to COVID-19 across the nation.

“When we look at the national average, we are overlooking what is happening at the local level,” he said.

In her presentation, De Guzman did say the Adar of the country as a whole was still at moderate level, but that the national utilization rates of hospital and ICU beds dedicated for COVID-19 patients had gone down to the “safe zone.”

“Health-care utilization rate is at 46.51 percent while ICU utilization is at 55.24 percent,” De Guzman said.

She said the health department’s data showed that the Philippines’ case growth rate fell to -9 percent during the June 13 to June 26 period, from a 15-percent growth rate from May 30 to June 12.

De Guzman based her overall assessment of the country’s low risk on both the moderate Adar of 5.42 and the low hospital utilization rates.

However, just a day earlier, she reported that four regions had high Adar and health-care utilization rates—Eastern and Central Visayas, and Davao and Soccsksargen in Mindanao. All four have an Adar of more than 7 as of June 30, she said.

De Guzman said the country was still in a fragile situation because the decline in cases was still “thin and very slow.”

“The challenge now is that while we open up our economy, we have to have safeguards,” De Guzman said, adding that if the country sustained its efforts in curbing the spread of the virus, the decline in cases would continue and could even speed up.

When asked whether the DOH assessment was enough for opening up the economy, OCTA’s David said his group supported maintaining the general community quarantine classification in most areas of the country.

“New cases are still occurring in significant numbers [and] the trend is still unstable in many places, such as Davao City and even Laguna,” David said.He noted that the positivity rate in the National Capital Region was still high at 6 percent. Positivity rate refers to the percentage of all tests for the coronavirus that turns out positive.

He said vaccinations were still below the targets and the threat of the highly transmissible Delta variant remained.

It said 2,859 patients had recovered, increasing the number of survivors of the severe respiratory disease to 1,341,973. The 135 who were reported to have died raised the death toll to 24,797.

The DOH said five laboratories failed to submit their data on time, and that 17 duplicate cases were removed from the total case count.