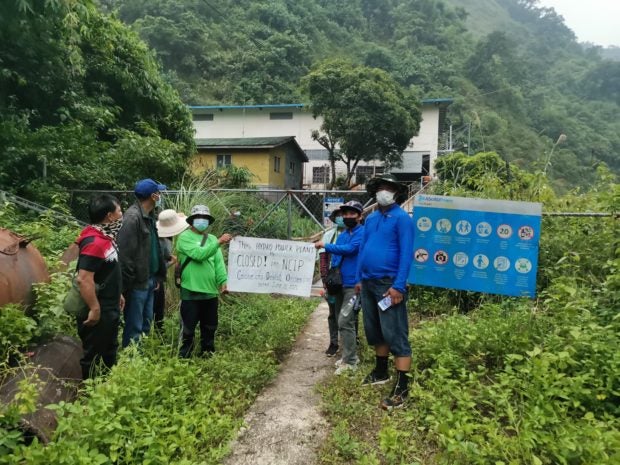 SHUTDOWN A team from the local government of Bakun, Benguet, serves on Wednesday a closure order, issued by the National Commission on Indigenous Peoples, on the hydroelectric plants operated by Hedcor Inc. —KIMBERLIE QUITASOL

BAKUN, BENGUET—The operator of the three hydropower plants here on Wednesday shut down its facilities after local officials enforced a cease-and-desist order (CDO) issued by the National Commission on Indigenous Peoples (NCIP) against the company.

Hedcor Inc., a subsidiary of the Aboitiz group, was forced to heed the order after almost three hours of negotiations with Mayor Bill Raymundo and NCIP officials.

The plants should have stopped operations on June 27 but Hedcor continued running the facilities, insisting that it was directed by the Department of Energy (DOE) to keep the plants operational considering the low supply in the Luzon power grid.

“How can the DOE’s letter supersede NCIP’s CDO that is based on the Ipra (Indigenous Peoples Rights Act)?” Raymundo told the Inquirer.

In a June 22 order, Marlon Bosantog, NCIP director in the Cordillera, directed Hedcor “to wind up and install safety protocols” in its three plants.
Bosantog gave Hedcor only five days to cease operation upon receipt of the CDO.

He said the closure order would remain in effect until the company could obtain a certification precondition (CP) from Bakun’s indigenous communities.

The CP is a certificate that the NCIP issues to attest that an indigenous community has given its free prior and informed consent (FPIC) to any company to use any part or portion of their ancestral domain.

On June 29, the company said it received a letter dated June 25, through which the DOE “advised Hedcor to continue operating” its FLS Hydro, Lon-oy Hydro and Lower Labay Hydro Plants. These facilities, put up in the villages of Poblacion and Sinacbat in 1991, account for a total of 12.4 megawatts of power generating capacity.

According to Hedcor, the DOE invoked the agency’s mandate under the Electric Power Industry Reform Act of 2001 to ensure the quality, reliability, security and affordability of the supply of electric power “especially during this period of health pandemic.”

The NCIP, on June 7, issued a notice of violation to Hedcor for the continued operations of the three plants without the Bakun people’s consent.

Bosantog said Hedcor had been violating the rights of the indigenous peoples of Bakun to their ancestral domain under the Ipra. He cited a resolution of nonconsent issued by Bakun Indigenous Tribes Organizations and town elders in April that prevented Hedcor from running its hydropower plants in their ancestral land.

Bosantog said Hedcor had “no more legal justification” to continue with its operations in the town for lack CP and FPIC.

Leo Lungay, Hedcor vice president for operations and maintenance, said a standing status quo ante order issued by the Regional Trial Court in Buguias town to maintain the uninterrupted operations of the power plants was not recognized by the local government and the NCIP.

“Unless DOE expressly states in writing and confirms that their letter is … simply a reminder [and not an order], we will treat DOE’s letter as an order for Hedcor to keep operating our plants in Bakun,” Lungay said in a statement.

Noreen Vicencio, Hedcor’s vice president for corporate services, reiterated the company’s long-standing request “to engage in a reasonable dialogue” with the community, while allowing the plants to continue running.

In a statement on June 23, Vicencio said the closure of their three plants would impact the already dwindling power supply in the Luzon grid.

“The CDO will not just affect Hedcor, but also the customers and communities we serve. At this time of a red alert situation in the Luzon grid, the continued operation of our plants is very crucial,” she said. INQ