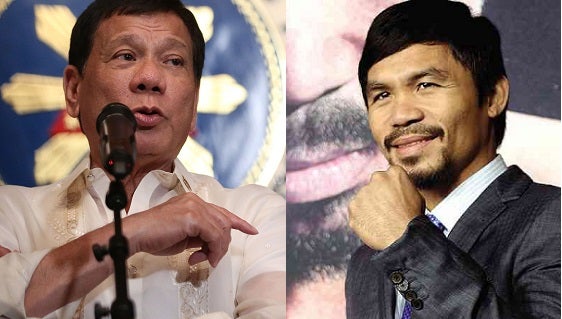 MANILA, Philippines — Before heading to the United States to train for his August boxing match and in light of his growing feud with President Rodrigo Duterte, Senator Manny Pacquiao said the country is in the middle of a crisis and quarreling is the last thing Filipinos need.

(Amid the imminent eruption of Taal Volcano, help and solutions are what our countrymen need. Not fights. There’s a crisis, this should be our focus now.)

The senator did not mention any names but Duterte has been chiding Pacquiao after he criticized government corruption under the current administration.

Pacquiao has denied he was “attacking” Duterte, saying he only wants to work with the President in his advocacy against corruption.

Pacquiao is leaving for Los Angeles, California, this Saturday for his “serious training” ahead of his August 21 bout with Spence, the senator told reporters on the sidelines of an event at the U.S. Embassy in Manila Thursday.

This, as Duterte dished out fresh tirades against Pacquiao and even claimed that the senator backed out from his upcoming boxing match.

READ: Duterte to Pacquiao: Do your job in Congress, ‘or you’re shit’

“You know he has a scheduled fight but suddenly nag-back out. Probably he knows that he’s too old for that. And failing in his boxing career, kung matalo siya [if he loses], he’s a goner actually,” the President said at the inauguration of the Light Rail Transit 2 East Extension Project.