MANILA, Philippines – Father Robert Reyes on Tuesday called on Chief Justice Renato Corona to resign if he has “any faith, conscience, and delicadeza.”

He called on the people to watch the impeachment trial closely and to form their own opinion. “We would not just watch and wait, we will get proactive,” he said.

Reyes said he was a member of a movement called “Ang tipo kong CJ” that asks people what they like in a Chief Justice. “Ang tipo naming CJ ay hindi nagsisinungaling at hindi nagtatago ng bank accounts,” Reyes said. 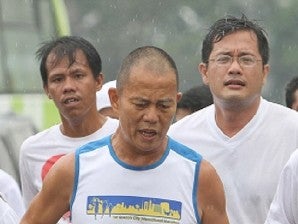 He ran from the Supreme Court and the Department of Justice, where he lit candles, before arriving at the Senate. “I prayed that this long trial will end, there should be no more delays. Anything that delays the process affects all of us,” Reyes said.

“The [issue preventing the] opening of the bank accounts is a delay,” Reyes said. “The best thing is for all evidence to be presented clearly and effectively to speed up the trial.”

Reyes said that if Corona really was not hiding anything, he should open up his dollar accounts now and not “in due time” as Corona has been saying.

Reyes praised Senate President Juan Ponce Enrile who is celebrating his birthday today saying that “he will play his role very well.”

“We need good judges who will not take sides. In the end, it is not one faction who will win over the other. It will be the truth and the people who will win,” Reyes said.

“I hope Senator Enrile will be above all the factions and the partisan politics that is at play all the time and he will decide in favor of the common good and the greater good of the Filipino people,” Reyes said.