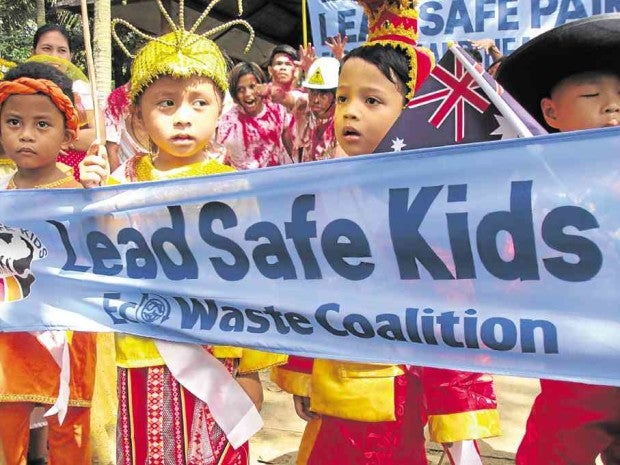 Lead-free kids kick off a countdown to the December 31, 2016, deadline for the phaseout of lead-tainted paint at the Quezon Memorial Circle on Sunday, October 23, 2016. —contributed photo

CAGAYAN DE ORO CITY — With the help of environmental advocates who have been campaigning against the danger of deadly chemicals found in ordinary and industrial materials, the country was chosen as one of five recipients of this year’s Future Policy Award, the EcoWaste Coalition said in a statement.

The award, handed out by the World Future Council (WFC) since 2010 to celebrate “impactful policies,” is considered the “Oscars on best policies.”

The award honored the country’s ban of the use of lead in the manufacture of paints to prevent children and workers’ exposure to this toxic chemical, said EcoWaste Coalition.

“For the sake of current and future generations, it is absolutely critical that stakeholders make the protection from hazardous chemicals a priority. The Philippines and the other winning policies show the way forward and are an inspiration for policymakers worldwide,” WFC executive director Alexandra Wandel said.

“Every day, our rights are violated by the exposure to toxic chemicals and pollution. Especially children are disproportionally affected,” Wandel added.

Other recipients of the award were Colombia, Kyrgyztan, Sri Lanka, and Sweden.

“This global recognition affirms the importance of adopting a lead paint law with the most protective lead content limit and crafted through an open and participatory process,” said Manny Calonzo, EcoWaste Coalition adviser.

The group said it did not work alone in ensuring that environmental and health regulations are being complied with by paint makers as it honored colleagues at the International Pollutants Elimination Network (IPEN) for their invaluable campaign guidance, support, and solidarity for the last 10 years.

“Stakeholders’ participation is key to catalyzing an industry-wide switch to the production of all paint types without added lead and to the eventual elimination of lead paint, a major source of lead exposure in children,” Calonzo added.

Derrick Tan, PAPM president, said the country’s paint makers have ably demonstrated their capacity to replace lead additives from all brands and products in compliance with the chemical control order (CCO) and in pursuit of their corporate social responsibility.

“It only shows that eliminating lead paint in all categories is an attainable goal. Some manufacturers have even voluntarily secured third-party ‘Lead Safe Paint’ certification to prove conformance with the strictest 90 [parts per million] limit for lead content in paint,” Tan explained.

In a statement, Environment Secretary Roy Cimatu thanked the WFC for the recognition.

“This will inspire us to further strengthen the implementation of our chemical control policy and to develop other policies to protect human health and the environment,” Cimatu said.

“We appreciate the vigilance of non-government organizations like the EcoWaste Coalition in the lead phase-out campaign. We also commend the academe and the PAPM for their support in making our CCO implementable,” he added.

A high-level online award ceremony will be held on July 6.