For many people, another reason to wear masks: Sulfur dioxide from Taal 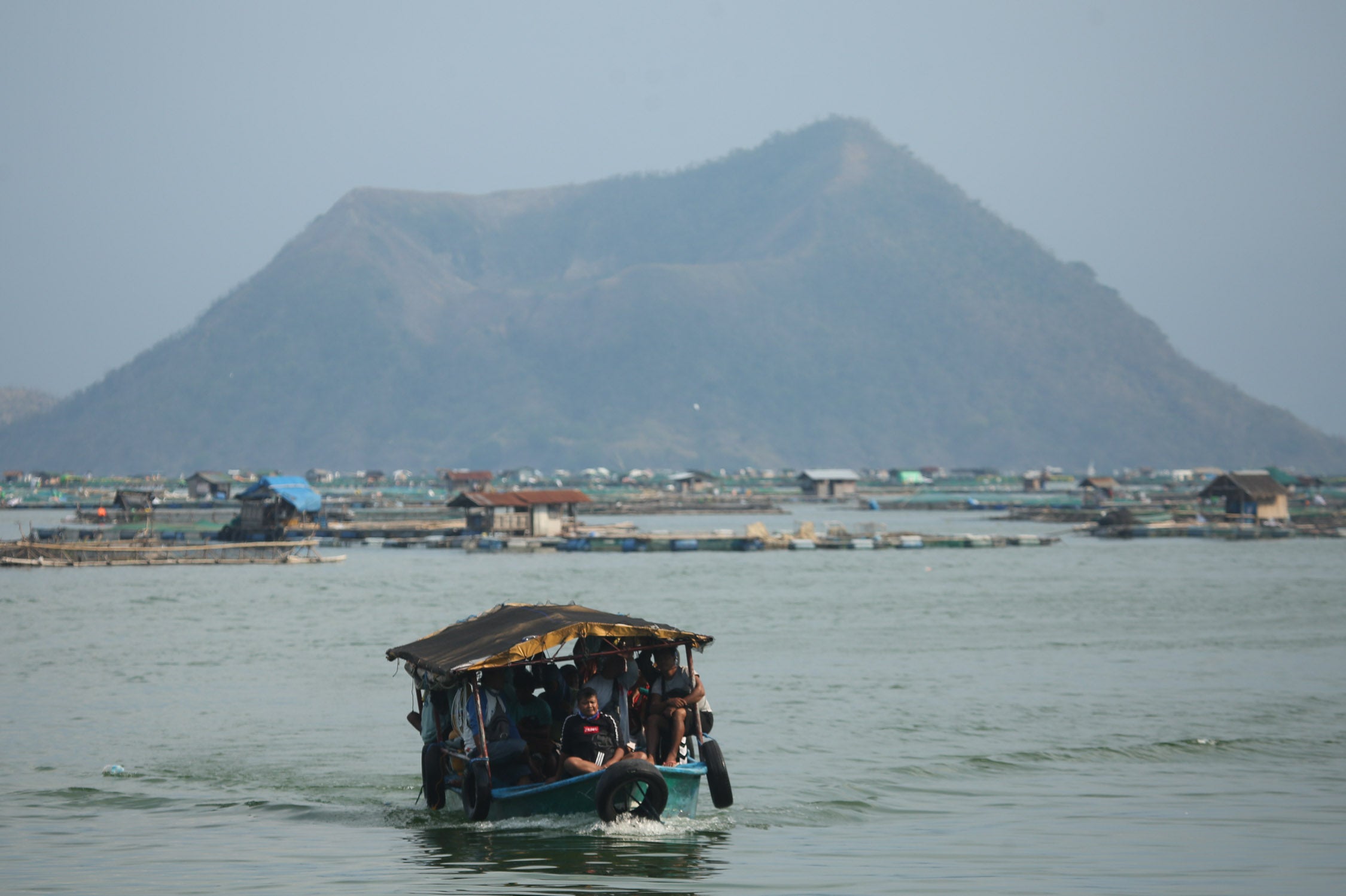 CONSTANT THREAT A boat carrying caretakers of fish cages makes its way to the shoreline of Talisay, Batangas, on Monday. Workers in the aquaculture industry in Taal Lake and villagers in lakeshore communities live with the constant threat of displacement from the active Taal Volcano, which last erupted in January 2020. —LYN RILLON

MANILA, Philippines — Taal Volcano’s emissions have added another reason for people in some areas to wear masks aside from preventing coronavirus infection—protection against sulfur dioxide.

Sulfur dioxide, according to the Philippine Institute of Volcanology and Seismology (Phivolcs), is acidic gas made up of two elements—sulfur and oxygen. It has no color and smells like lighted firecrackers.

Phivolcs said sulfur dioxide can cause eye, throat and respiratory tract irritation and infection “with severities dependent on the gas concentrations and duration of exposure.”

After initially describing the haze that blanketed parts of Metro Manila as pollution, Phivolcs has acknowledged that there was evidence that this was from Taal’s emission.

On Wednesday (June 30), Phivolcs said the haze was from sulfur dioxide plumes from Taal that had been carried by winds to Metro Manila and provinces close to the Philippine capital. 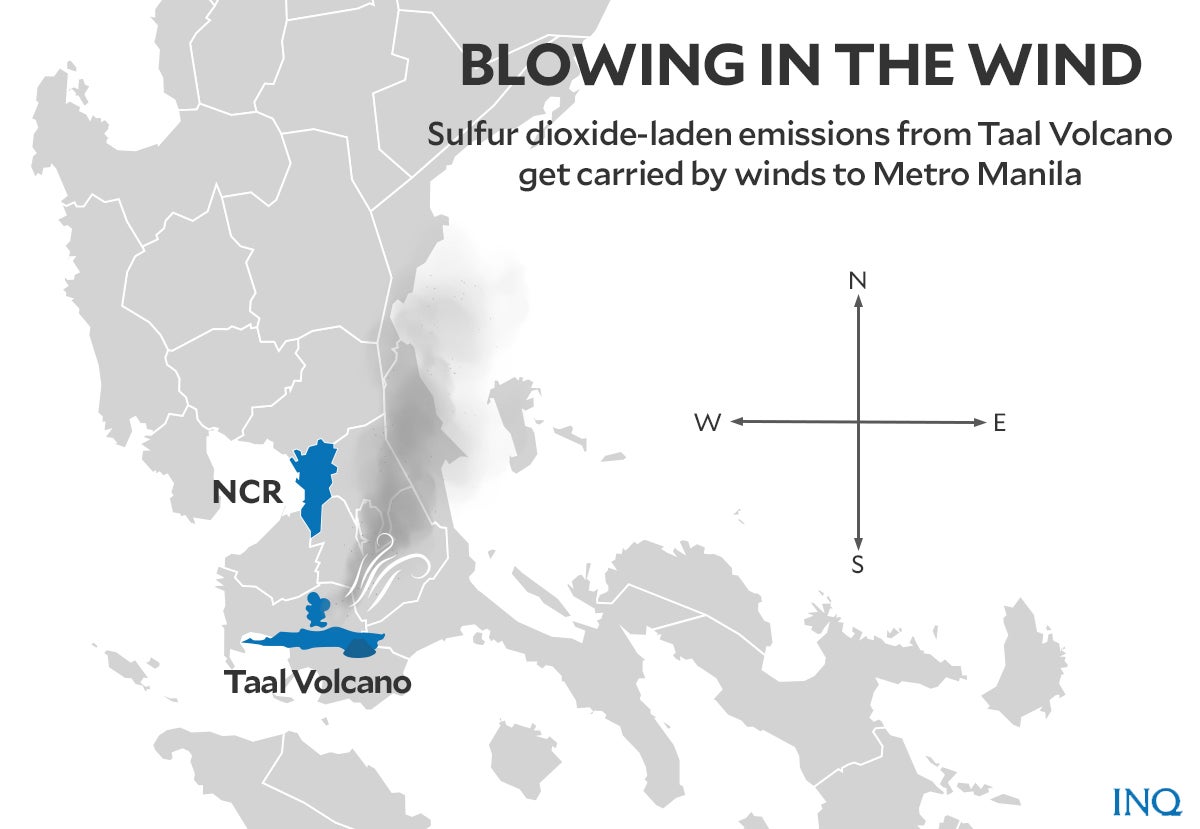 In a statement, the agency said it now “stands to acknowledge evidence of the actual wider extents” that sulfur dioxide from Taal has spread over the National Capital Region (NCR) and provinces nearby.

The evidence, Phivolcs said, “gives credence to the many observations that the public have communicated.”

“We also released statements that the haze over Metro Manila is mainly due to smog from human activities, interpretation which is supported by information from Pagasa,” said Phivolcs, referring to the Philippine Atmospheric Geophysical and Astronomical Services Administration, the country’s weather agency.

The pollution angle, Phivolcs said, was based on Pagasa’s assessment that “the presence of a warm layer of air at elevations of less than one kilometer is preventing cooler air near the ground to rise, trapping pollutants and helping promote the accumulation of smog over NCR and nearby provinces.”

In its statement on Tuesday (June 29), Phivolcs gave a technical explanation: The volcanic smog, or vog, it said, extended “from the planetary boundary layer, representing near-ground surface levels, to the upper troposphere at almost 20 kilometers above sea level and mostly spread over Batangas, Laguna, Cavite, Rizal, Bulacan, Pampanga, Bataan, Zambales, and Metro Manila.”

Pagasa told INQUIRER.net that the volcanic emission had been carried by winds to several areas.

On Tuesday, the wind direction was north to northeast. Last Monday (June 28) it was south to southwest, according to Pagasa.

Sulfur dioxide emission, Phivolcs said, “can be blown to the northeast and east to lakeshore communities depending on wind direction.”

Pagasa said current southeast to southwest wind direction might lead to lower sulfur dioxide emission being blown to Metro Manila and provinces nearby.

Last June 12, sulfur dioxide plumes from Taal Volcano started making their effects felt on residents and crops in communities in Batangas near Taal.

People in these areas, Pagasa said, “have experienced throat irritations and observed sudden dry-out or vegetation kill in crops, plants and trees after a period of rain.”

Prior to this, Phivolcs said that sulfur dioxide plumes averaged nearly ten tons per day on June 10. The highest emission in recent days, which averaged at 14,326 tons per day, was reported last June 28. 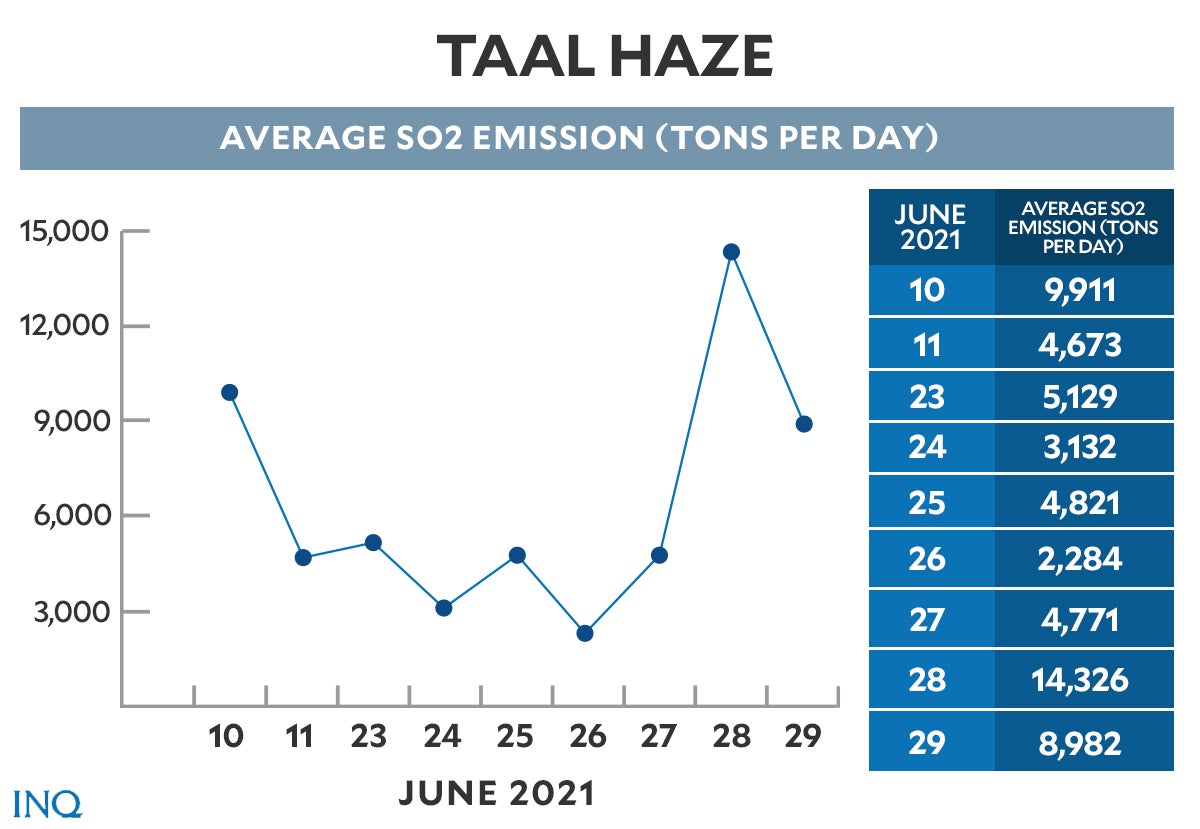 In its latest advisory, Phivolcs said Alert Level 2 stays over Taal Volcano, indicating that “the threat of sudden steam or gas-driven explosions and lethal accumulations or expulsions of volcanic gas can occur and threaten areas within and around the Taal Volcano Island.”

It also “strongly” recommended closing off entry into the island and a permanent danger zone around the volcano “especially the vicinities of the main crater, the Daang Kastila fissure.” Recreational activities on the lake are also prohibited.

Sulfur dioxide gas from Taal, according to volcanologists, is acidic. It’s colorless but smells of burned gunpowder. Some of its harmful effects are eye, ear, throat and respiratory tract irritation “with severities depending on gas concentrations and duration of exposure.” 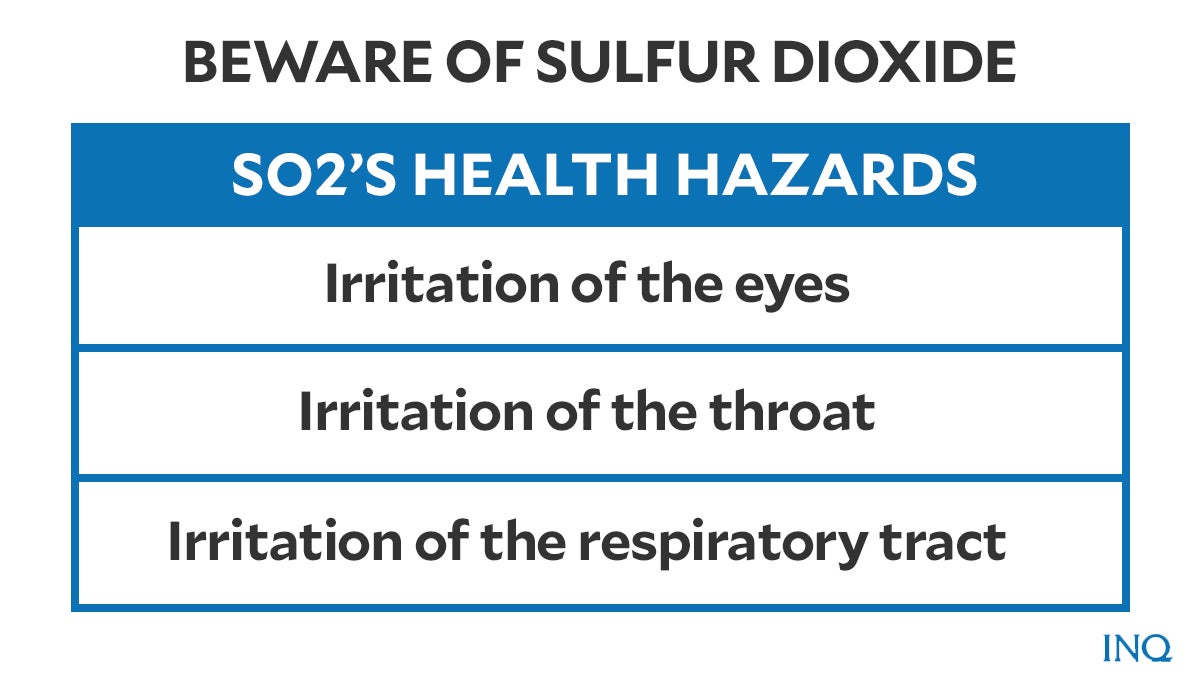 People with existing health conditions—asthma, lung or heart disease, the elderly, pregnant women, children—are vulnerable to the effects of the gas.

Phivolcs reminded the public to “protect yourself” by wearing N95 face masks. The agency also encouraged people to drink plenty of water and to limit exposure to the gas.