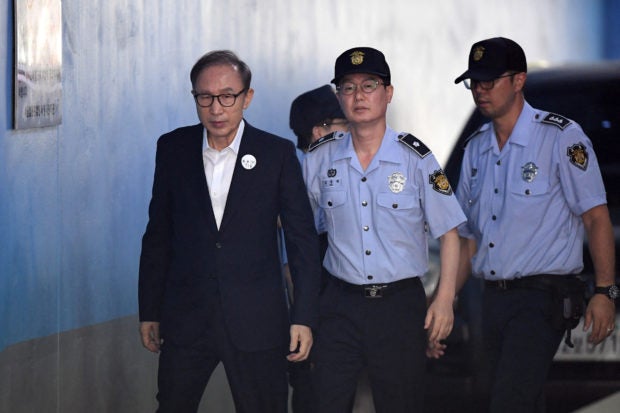 SEOUL — Jailed former President Lee Myung-bak said it was a shame that the country has come to its current state in a letter to a fellow university alumnus, which was disclosed on an alumni website.

On the online community of Korea University students and graduates called Kopas, a person who introduced himself as a plastic surgeon and graduate of the university’s medical school said in a post on Tuesday that he wrote to Lee, and Lee wrote back.

“It is such a shame that the country has come to this,” the ex-president wrote in the handwritten letter, a photo of which was disclosed on Kopas.

“It takes time to build things, but we are seeing with our own eyes that things can be torn down in an instant.”

The author of the post, who said he entered medical school in 2002, also unveiled the letter that he wrote to Lee.

He wrote to Lee that as he was a student with little interest in politics during Lee’s 2008-2013 presidency, he just remembers that “people came out to the plaza and held candles, saying the country was importing crazy cows,” referring to the mass protests in 2008 that began with false claims that US beef was infected with BSE, or mad cow disease, and posed a risk of causing fatal illness in people who ate it.

He wrote that as he got older and raised kids, he “looked a bit” into politics because it greatly affected his life, and he was called derogatory terms for old people who use artificial teeth and members of a notorious ultra-conservative online community.

“People with no achievements” built large statues and memorials like the North Korean leader Kim Jong-un’s family to “shamelessly beautify (their actions) and distort,” and “are destroying the reservoirs built to prevent damages from floods and draughts to erase your achievements,” he wrote.

“As you can see in the Korea University students’ posts on the community (which he enclosed in the letter), many people came to know of your genuine work … and miss the times when you were president.”

He wrote that “people who do not want to admit or don’t know well eat good American beef at low prices and commute on buses that became more convenient with bus lanes” in the center of the roads, which were introduced during Lee’s time as Seoul mayor.

Lee, who was sentenced to 17 years in prison in addition to fines and forfeiture last year for embezzlement and graft, wrote back in a short letter, saying “I think everything is my fault, but I am sure the truth will come to light,” according to the author of the post.

It hasn’t been confirmed whether the handwritten letter was actually written by Lee.

Conservatives have been talking about pardoning Lee and his successor, former President Park Geun-hye who is serving her 22-year jail term.

Yoon Seok-youl, a former prosecutor general who announced his presidential bid on Tuesday, said he sympathizes with many Koreans who feel bad about the long imprisonment of the two senior citizens.

Yoon had led investigations into Park in 2016 and Lee in 2017. He had Lee detained in 2018 as the chief of the Seoul Central District Prosecutors’ Office.