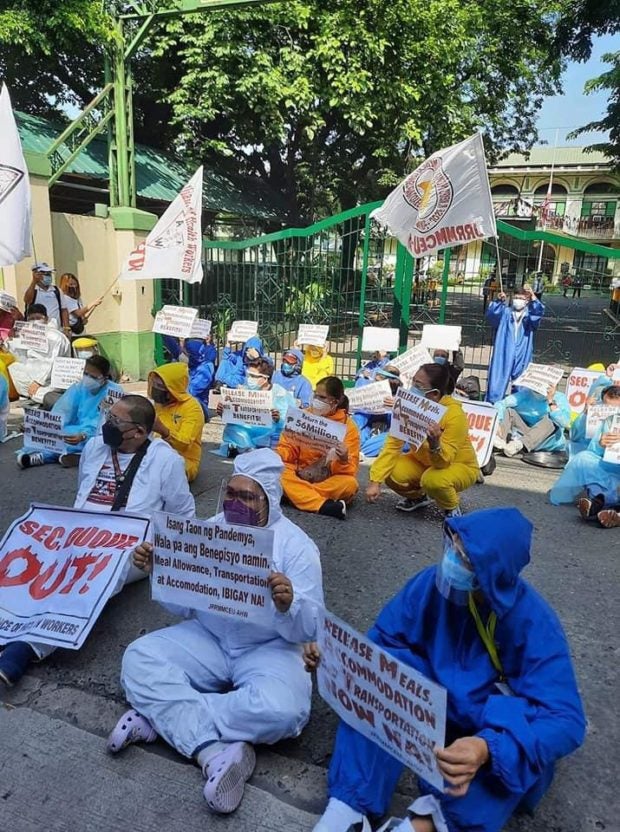 Members of the Alliance of Health Workers hold a sit down protest in front of the Department of Health office in Manila. Photo from the group’s Facebook page

MANILA, Philippines — Health workers from different government hospitals staged a sit-down protest before the Department of Health’s (DOH) central office in Manila on Wednesday to demand their unpaid benefits under the Bayanihan 2 law, which expires today.

The health workers are specifically calling for the release of their allowances, special risk allowance (SRA), and hazard pay.

According to the Alliance of Health Workers (AHW), a utilization report for Bayanihan 2 as of May 31, showed that a total of P24 billion was already released in tranches for vaccination, payment of health human resources, procurement of medicines, laboratory testing services, and other items.

“It is very clear that the DOH and this government have enough funds. But the question is, where are these funds now? Today is the last day of Bayanihan 2 and yet, we are still fighting and calling the DOH to immediately release our hard-earned benefits,” said Robert Mendoza, national president of the alliance.

“We are very frustrated and angry with the DOH, the agency that is primarily mandated to look after our rights, protection, and welfare. This is indeed a clear manifestation that the DOH and the Duterte administration are abandoning their role and responsibility to protect us,” he added.

Mendoza said the AHW sent a letter to President Rodrigo Duterte on June 25, to seek immediate action regarding the concerns of health workers.

“And same goes with other various hospitals that were forced to comply with the DOH order. Where will they take the remaining funds now?” she said.

The DOH earlier said the funds originally intended as transportation, accommodation, and meal allowances for public hospital employees but were “repurposed” for other COVID-19 response efforts will be given to them as cash following a directive from Malacañang.

However, the health department said it was still coordinating with the Department of Budget and Management (DBM) regarding the funds for the monetization of these allowances.

Meanwhile, the AHW also branded the granting of SRA as “selective” and “divisive” among health workers because only those with direct contact with COVID-19 patients are eligible to receive the said benefit. The DOH earlier said the P9 billion fund for the SRA has already been released to regions and hospitals after the DBM issued the release order last week.

Mendoza said that the SRA should be given equally to all health workers.

“As we enter the hospital or a certain health facility, the threat of being infected with the infectious and deadly virus is already there,” he explained.

“More so, SRA should not be computed as pro-rated or according to the number of duty-days that health workers report for work but rather be computed per month,” he added.

Donguines stressed that the “gross incompetence and neglect” of the DOH and the Duterte government is “too much.”

“We have suffered more than enough and we are extremely demoralized. We don’t deserve to beg for these benefits as these were already provided by law in due recognition of our historical role in battling this pandemic,” she said, noting that some health workers have died without enjoying their benefits.

The group then renewed their call for Health Secretary Francisco Duque III to resign. It said Duque and other officials should be held accountable for their “gross neglect” to the welfare of health workers.

“We are seeking justice for all health workers who are neglected and betrayed by the DOH and the Duterte government in this fight against the COVID-19 pandemic. Thus, we strongly demand Secretary Duque to resign from his post,” said Mendoza.

The DOH has yet to issue a statement regarding the concerns raised by AHW, but it earlier assured it is doing its best to provide the benefits due to health workers.