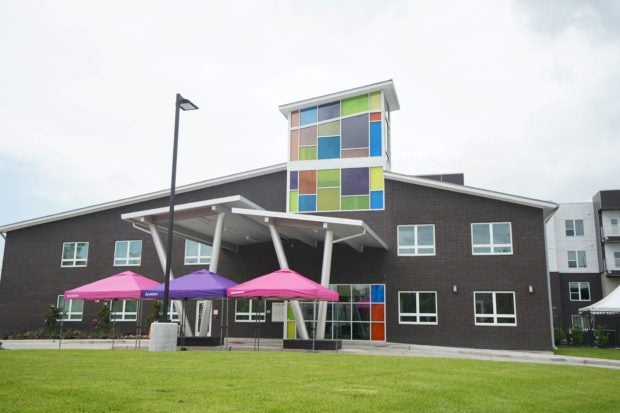 Outside view of the Law Harrington Senior Living Center, the largest LGBTQ senior residence in the US, in Houston, Texas on June 24, 2021. AFP

HOUSTON — Life has thrown a lot of roadblocks at Dina Jacobs, a transgender woman, for trying to live authentically. But now, she can finally see the light at the end of the tunnel.

“Look, everything comes through eventually. Five million no’s and one yes, and this is it. This is my yes!” says Jacobs, who spent her 57-year career on stage as a drag performer.

Jacobs, a Hawaiian native, is showing a reporter the modest one-bedroom apartment she is now able to rent for less than $500 a month in the first residence in the southern United States exclusively for LGBTQ (lesbian, gay, bisexual, transgender and queer) people.

Formally inaugurated on Thursday, the Law Harrington center offers 112 one- and two-bedroom apartments, as well as common spaces including a library and a dog park.

Located on the edge of Houston’s fast-gentrifying Third Ward, it aims both to provide refuge to allow an aging and vulnerable population to remain in their own neighborhood, and to extend a positive welcome to the broader LGBTQ community.

“A lot of them don’t have kids who can provide generational support. There’re also issues of resources, because those who are publicly out may have economic disadvantages, lost jobs,” said Annise Parker, a former Houston mayor who attended the inauguration.

It was Parker — one of the first openly gay mayors of a major US city — who eight years ago returned from a visit to a similar center in Los Angeles with the idea of creating such a welcoming residence in Houston.

The common room, where Parker cut the inaugural ribbon, now bears her name.

“It’s not actually named because of the work I did as mayor,” she said with a laugh. “It’s because my wife Kathy and I made a substantial donation!”

Designed by a neighborhood architect, the residence — with its rainbow-colored central tower — is the largest in the United States specifically welcoming LGBTQ seniors.

It bears the names of Charles Law and Gene Harrington, two gay rights activists from Houston. Both died of AIDS, respectively in 1993 and 2002.

The Montrose Center, which has supported LGBTQ causes since 1978, spearheaded the project, raising the $26.5 million needed.

“When I first came out as gay, in Texas, my family had a really hard time with it,” said Kennedy Loftin, Montrose’s chief development officer.

“I did not have any place to sleep. That brief housing insecurity made me realize how important it is to take care of our seniors.”

“It’s one of the only places where same-sex senior couples, or transgender seniors and other members of the LGBTQ community, can live safe and affirmed in older ages,” he said.

Residents will also have access to a clinic run by Legacy Community Health Services, an “LGBTQ-affirming” entity, according to Legacy director Katy Caldwell.

“LGBT seniors are specifically at risk for not going to the doctor because they’ve been treated badly in the past, discriminated against, afraid to talk about who they love and to bring the people that they love with them to see the provider.”

The clinic is open to all neighborhood residents.

‘Beat up all the time’

Jacobs, who just survives on her modest Social Security payments, would rather not dwell on her difficult medical history.

After proudly showing off a new closet big enough to hold all her flamboyant show gowns, she grows quiet when describing her rough road to the present, whether dealing with an unscrupulous manager in Texas or widespread hostility in her early days in Honolulu.

Jacobs can’t help but think about the LGBTQ activists who were unable to live out their lives in dignity. A welcoming residence like Law Harrington should have been founded long ago, she said.

“There’s a lot of people that died lonely in the streets, and it’s just not right. When they were fighting for everybody’s rights, nobody was there for them. And now that we got all the benefits of what they did, they’re not here to appreciate this.”

As evening begins, though, Dina is again doing what she loves best. Dressed in a glamorous, sequin-covered gown with a low neckline, she sings for an audience of Houston’s gay elite.

The song she has chosen was made famous by diva Diana Ross in the 1978 musical “The Wiz.”