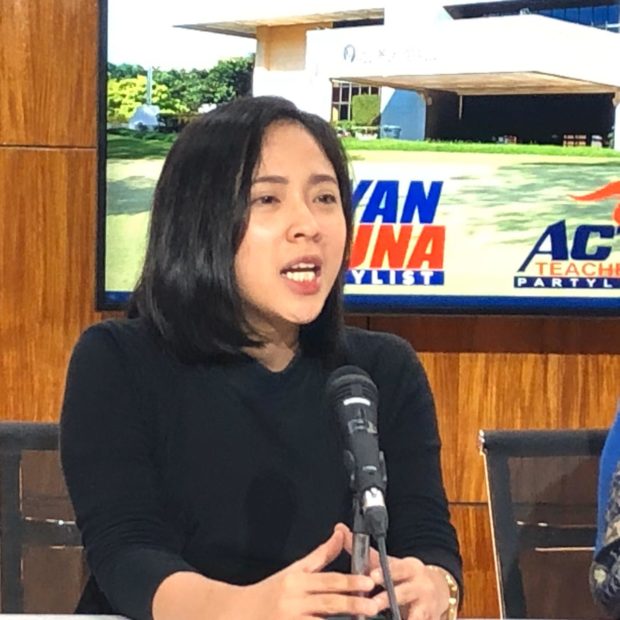 The National Task Force to End Local Communist Armed Conflict (NTF-Elcac) was only wasting government’s resources after it filed a petition in the Commission on Elections (Comelec) to cancel the registration of Kabataan party list for allegedly being a legal front of the communist rebels, a lawmaker said on Sunday.

Kabataan Rep. Sarah Elago said they remained “unbothered” by the recent petition of the NTF-Elcac. The anticommunist task force had also earlier filed a disqualification case against Gabriela Women’s Party.

Kabataan and Gabriela are part of the left-leaning Makabayan bloc at the House of Representatives, which also include lawmakers from Bayan Muna and ACT Teachers.

In a petition filed in the Comelec on June 25, the NTF-Elcac said the Kabataan party list has served as “a funnel to a terrorist organization,” referring to the Communist Party of the Philippines and its armed wing, the New People’s Army.

“It’s not true, nothing new and their trumped-up charges have been dismissed several times,” Elago said, adding that they were ready to answer the allegations of the NTF-Elcac before the Comelec.

Despite the intensified political persecution against critics and the opposition, Elago said “we will not be cowed into silence.”

Lawmakers earlier called for the government to defund the NTF-Elcac and reallocate its current P19-billion budget to fund the administration’s pandemic response after some of its officials were involved in Red-tagging. INQ