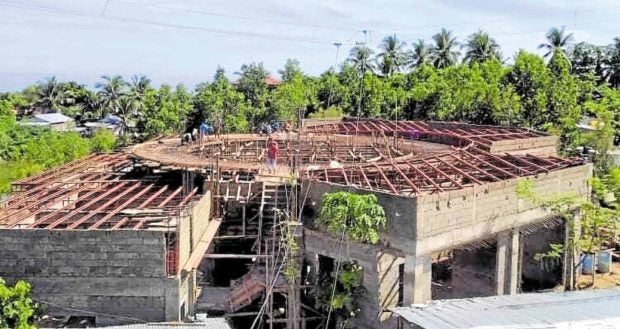 STARGAZING, SOON The first planetarium in Mindanao, which is being built in El Salvador City, Misamis Oriental, is expected to be completed by August this year. —PHOTO COURTESY OF MISAMIS ORIENTAL PROVINCIAL INFORMATION OFFICE

CAGAYAN DE ORO CITY—Mindanao will have its first planetarium, which is now being built in El Salvador City in Misamis Oriental.

According to provincial legal officer Cirilo Neil Pacana, who was charged with helping oversee the project’s construction, the facility is expected to be completed by August this year.

Costing P50 million, the facility is a project of the Philippine Atmospheric, Geophysical and Astronomical Services Administration (Pagasa) and sits on public land that the provincial government has converted for the purpose, Pacana said.

The planetarium will feature a large dome-shaped projection screen that shows constellations, planets and other celestial objects that will appear in three-dimensional perspectives.

The facility is expected to boost students’ learning in the field of astronomy, Pacana said.

He said Pagasa also hoped it would spark interest among young people to pursue science-related degrees.

The planetarium is being built close to the Pagasa weather observatory facility in the city.

Earlier, Pagasa Administrator Vicente Malano had said that a similar facility was also expected to be built in Davao City, Mindanao’s most progressive city and hometown of President Duterte.

The state weather bureau is currently operating Pagasa Planetarium at its Science Garden compound inside the campus of the University of the Philippines in Diliman, Quezon City. It also operates a mobile planetarium, which is an inflatable replica of the fixed planetarium in Pagasa Science Garden.

Pagasa also offers telescoping and stargazing sessions at its regional offices in the cities of Davao, Cagayan de Oro, Cebu and Legazpi, according to information posted on the weather bureau’s website. INQ