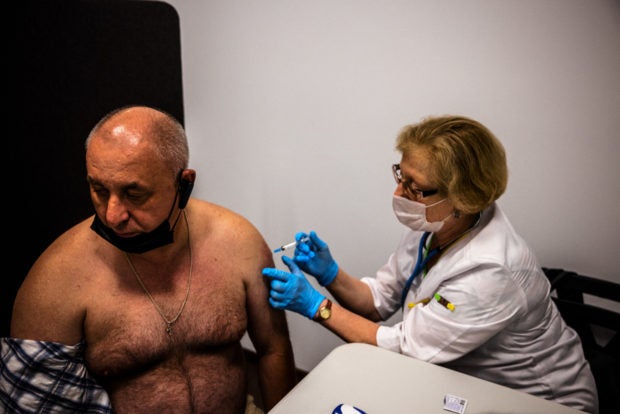 A man receives a dose of Russia’s Sputnik V (Gam-COVID-Vac) vaccine a at a vaccination centre for the Yandex Go drivers and couriers in Moscow on June 25, 2021. AFP

MOSCOW — Moscow on Sunday recorded 144 Covid-19 deaths in the last 24 hours, the worst toll in a Russian city since the start of the pandemic, according to official data.

Moscow’s record comes a day after one set by Euro 2020 host Saint Petersburg, where a quarter-final is to be held on Friday in front of thousands of fans.

Covid-19 infections have been surging in Russia for weeks, blamed on the highly transmissible Delta variant first identified in India.

Dozens of Finland supporters caught coronavirus in Saint Petersburg after they travelled to the city last week for their team’s defeat against Belgium.

Moscow has been the national epicenter of the pandemic and some 2,000 people are hospitalized because of the virus there daily, Mayor Sergei Sobyanin said late on Saturday in televised remarks.

The steep rise in infections in Russia comes as officials push vaccine-skeptical Russians to get inoculated, after lifting most anti-virus restrictions late last year.

“To stop the pandemic, one thing is needed: rapid, large-scale vaccinations. Nobody has invented any other solution,” Sobyanin told state-run television on Saturday.

Russia is the sixth-worst hit Covid-19 country in the world, and the hardest in Europe.

Authorities have been accused of downplaying the severity of the outbreak in the country.

Under a broader definition for deaths linked to coronavirus, statistics agency Rosstat at the end of April said that Russia has seen at least 270,000 fatalities since the pandemic began.

As of Saturday, just 21.2 million out of a population of about 146 million had received at least one dose of a vaccine as of Friday, according to the Gogov website, which tallies Covid figures from the regions and the media.