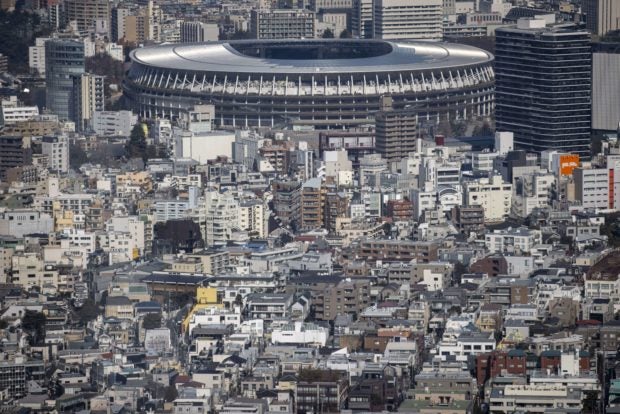 This picture shows Japan’s National Stadium, the main venue for the Tokyo 2020 Olympic and Paralympic Games, pictured from the Shibuya Sky observation deck in Tokyo on February 2, 2021. AFP

TOKYO — The seemingly endless sprawl of Tokyo can be hard to take in from the ground. But sky-high observation decks dotted across the Japanese capital offer a fresh perspective.

Among the most popular are the two decks at the Tokyo Skytree, the tallest structure in Japan, which attracted an average of 4.5 million visitors a year before the pandemic.

With its distinctive metallic lattice facade, the 634-meter tower can be seen for miles around in Tokyo and offers the highest observation deck in the city.

The Tembo Deck is a little over halfway up, with towering glass panels allowing a panoramic view of the concrete jungle far below.

The Skytree boasts that visitors can see up to 70 kilometers away, with Japan’s Mount Fuji regularly visible floating above the city’s haze.

But the tower allows visitors higher still, with a second observation deck at 450 meters above ground.

One of the city’s older observation decks is on the Tokyo Tower, another famed city landmark. The communications tower is based on the design of the Eiffel Tower and was completed in 1958.

It offers a small top deck around 250 meters up and a bigger two-story deck lower down that is reachable by elevator, or for the energetic, a 600-step staircase.

At night, the tower is lit in orange, highlighting its famous red-and-white girders, which contrast starkly with traditional colors and lines of the neighboring Zozoji Temple.

“I live five minutes away… and I’ve been visiting here to see the changes as the start of the Olympics approaches,” a local resident told AFP by the tower recently.

“It reopened at the beginning of June, but it feels a bit desolate because most visitors during the weekdays are locals,” she added, declining to give her name.

“Given the tower was finished in the 1950s, I’m curious how it feels about witnessing its second Olympics!”

Japan’s capital first hosted the Games in 1964 and is now counting down to the pandemic-postponed Tokyo 2020 Olympics, which opens on July 23.

Shibuya Sky opened in 2019 and is 230 meters up, with panoramic views of the city and an observation compass that points out landmarks.

And for those more interested in the natural world? There are hammocks for cloud-watching.