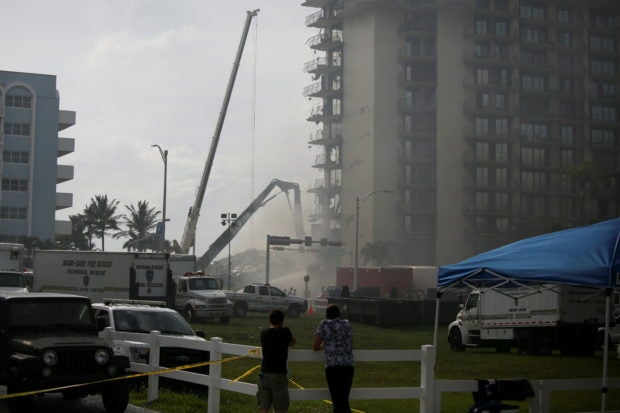 SURFSIDE, Florida —  Two days after the collapse of a seaside Florida building, authorities said they would help residents of a similar tower nearby evacuate as they examine it for structural flaws that might indicate a similar risk.

“I need to be able to say it’s safe, and I can’t right now,” Surfside Mayor Charles Burkett told Reuters. “In an abundance of caution it’s probably prudent to let folks relocate for a couple of weeks while we check it.”

The effort underscored the confusion and uncertainty surrounding the sudden collapse of the 12-story Champlain Tower South, which left five dead and 159 missing in an upscale beach community north of Miami.

The 40-year-old building had been undergoing repairs following a 2018 review that found “major structural damage.”

That condominium was built in the same year by the same developer as Champlain Tower North, a similar tower that stands nearby.

Burkett said he had no information to indicate the north tower had similar structural flaws. But he said the Federal Emergency Management Agency would relocate residents for several weeks to allow a thorough review of the property.

The evacuation is not mandatory, he said, but many residents are eager to leave.

READ: Rescuers search around the clock for survivors of Florida building collapse

Members of the condominium board did not respond to requests for comment. A resident of the building, reached by phone, declined to comment.

As of midday, the building appeared to be at least partially occupied. A person stood on a balcony of the building, looking out at the beach, where police had erected a plastic barrier to keep onlookers at bay.

Miami-Dade authorities have ordered a review of all other 40-year-old buildings in the county to ensure they had undergone an engineering assessment, as required.

Other area residents said they were shocked by the collapse but did not feel personally at risk. “I think it was an isolated event,” said Nikolaus Benigni, who lives in a 25-year-old tower nearby.