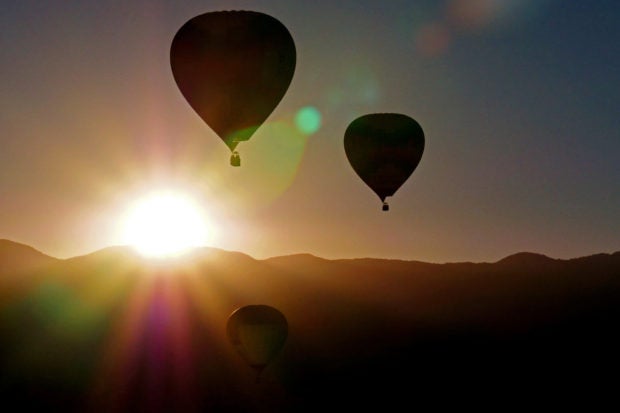 Balloons fly over the Sandia Mountains during a Mass Ascension during the 2018 Albuquerque International Balloon Fiesta on October 6, 2018 in Albuquerque, New Mexico. AFP FILE PHOTO

A hot air balloon crashed in an Albuquerque, New Mexico, neighborhood on Saturday, killing five people after apparently being blown into power lines by the wind and catching fire, police said.

The pilot and three passengers were pronounced dead at the scene, police said. The fourth passenger was transported to an Albuquerque hospital where he succumbed to his injuries.

The basket crashed on a street corner in the city’s West Side neighborhood near a pharmacy, about six miles (10 km) west of the Albuquerque International Sunport Airport, according to a report from the Federal Aviation Administration (FAA).

The balloon separated from the basket after it crashed and landed elsewhere, police said.

The ages of the victims are between 40 and 60 years old, police said, but no names were released. No one on the ground was injured.

“We know from experience here in Albuquerque that sometimes winds kick up or things happen that make it difficult for balloons to navigate,” Albuquerque Police spokesman Gilbert Gallegos told reporters in a news conference.

He added that it is still unclear what happened.

The FAA along with police are investigating the accident.

The Albuquerque Journal reported a power outage in the area affecting 13,000 homes and businesses.